A few hours ago, Russia decided to do the unthinkable which is to invade Ukraine when the world is still nursing itself from the disruption caused by the pandemic. It was reported that Russian forces poured into Ukraine from multiple locations and lives had already been lost on the battlefields. Global markets collapsed with major European markets falling 5-6% as we speak. Russia's own stock market fell 30%!

Oil prices which went negative $40 last year at the height of the pandemic is now at a multi year high of $105. This is the crazy world that we now live in. Imagine if we had bought oil at -$40 last year and now we can sell at +$100! How does the return calculation even work?

Meanwhile, individual stocks are badly hit. In Singapore, index names like banks fell as global investors take risks off their portfolios. Air travel related names got their second punch in the face (the first being the pandemic) and fell a good 4-5%. Food Empire, with its core business in Russia fell close to 6%. Only oil related names did well given the rally in crude. 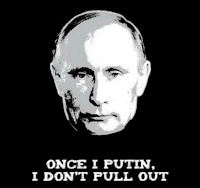 It is unclear what is Putin's play here. Does he want to leave a legacy, be remembered as the Russian leader who united Ukraine and the ex-USSR nations? Or he simply wants to use this opportunity to stir shit, play geo-politics and stay in office for as long as possible? Or is it really pre-emptive because if Ukraine joins NATO, then Russia will see dark days with NATO at its doorstep and surely he doesn't want to be judge by history as doing nothing when that happened.

However, it is said that this war will cause at least 50,000 lives. Already, hundreds of soldiers and a few civilians have died. So what is the math here? 50,000 lives and thousands of Ukrainians and Russians suffering and all the sanctions that will come with the invasion (which will cause even more suffering for the rest of Russia) is worth Ukraine not joining NATO and Putin's legacy not getting tarnished?

Well, let's leave the moral questions aside for now. What can investors do about the current situation?

As with most crises, this would turn out to be a buying opportunity if we have the stomach for the volatility ahead. We have gone too far down the QE addiction that any decline will be supported by governments to devalue fiat currencies, thereby inflating the values of stocks, investments and other assets. However, if war breaks out in the same magnitude of WWI, then we are in a different regime. We shall revisit this doomsday scenario later. 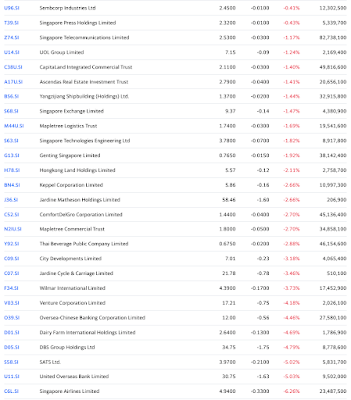 It is worth noting that quality stocks are not falling as much as the high beta names. For example, amongst the European stocks that I track, weak names like Bayer and Rolls Royce are collapsing while stronger names like Diageo and Adidas are holding up much better. In Singapore, similarly stronger names like Singtel and SGX did not fall as much as Venture and the Jardine names (see table above). It also seemed that we are not seeing real capitulation yet, so the bottom may come only next week or the week after.

This is a good reminder that we should always stick with strength and quality. These stocks are boring but precisely in times like this that we don't lose sleep agonizing over why they are falling like rocks. Although I must emphasize that the heydays of Singtel could be over. It is on its way to become a dumbpipe. Also, I did recommend Jardine Cycle and Carriage as a holding but it's not in the same league as SGX and Diageo, for sure. So, sometimes we just have to stomach the volatility that comes with some of these higher beta plays.

Of course, if this escalates to full blown war, then no amount of buying on dips can help. I have held the view that we always face a remote possibility that all that we know about modern finance and money can be gone one day. During the GFC, we came close to that. I am talking about the breakdown of the global financial system, all our savings in the banks gone and fiat currencies no longer hold any meaning. If this war escalates to something like WWI, then that nightmare scenario comes back.

Therefore, I have always advocated that we should hold some tangible assets like gold, luxury watches, jewellery and things that are outside today's financial system that can retain value. Hence I also have changing thoughts on Bitcoin which I hope to blog about as well. However, Bitcoin bought at crypto exchanges are still part of the system so you do need to get the Bitcoin into a cold wallet and keep it safe. The other important asset is real estate. But you need to have at least two. One to stay in and the other to sell when savings run out in a protracted war.

Let's hope we don't get there and let's pray for the people in Ukraine now. I am sure Putin is not thinking of escalating the situation to a world war and let's hope the world can find some resolution and avert this nightmare and we can look back in a year's time and feel smart that we bought into the market courageously next week, or even this week.

SIA Engineering (SIAEC), together with its parentco, has been badly hit by the pandemic. Its share price collapsed from S$3-4 levels to S$2-2.5 today. Years ago, I wrote an analysis with a bear case scenario that determined that the intrinsic value should be S$3.5 given that it will still earn S$200m of free cashflow (FCF) annually in a "downturn". My bull case has an intrinsic value of S$5 supported by annual free cashflow of S$250-350m! 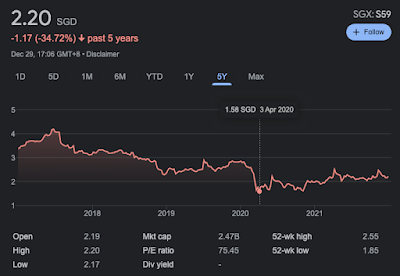 SIA Engineer's five year share price
Well, the pandemic threw everything out of the window. SIAEC went into losses last year although it did continue to generate FCF, amazingly. This was S$150m in FY2020 (not to far off from my S$200m!) and S$80m for the first half of FY2021. So if we can get pandemic out of the way in 2022, then this can really be an interesting pandemic recovery play! But this is not post to gloat about the accuracy of my numbers. I am still in red by about 30% given my entry price was above $3. This is another "lesson learnt" post.
So what can we learn from this episode?
The first lesson, which has been said but not easily executable, was to cut loss or trim. When the pandemic broke out and all aviation names would be in trouble, there were opportunities to trim but I did nothing. I was cowering my head in the sand because it was too painful to face the situation and think. I should have written this post back then and come to the simple conclusion that trimming will give me firepower to buy more later.
Instead, I did other silly things are trimming winners and cutting other stocks that are less well-loved (only to see them rebound 100%). Yes, this name is one of my favorite, a rare Singapore stock. I couldn't bear to cut. This is the analyst's cardinal sin - do not fall in love with your stock. This is the second lesson. 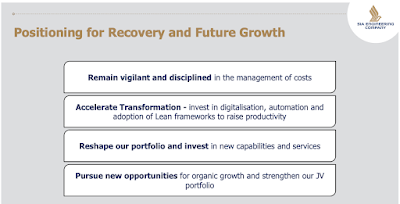 Accelerating transformation!
Okay. Now that we have learnt our lessons, it is pointless the dwell on the past. It's time to look forward while remaining vigilant on how we can reshape our portfolios (the consistent message from SIAEC's investor materials!). There are two points to discuss: SIAEC's management and the future of aircraft maintenance.
This pandemic has reiterated the point that SIAEC's management is very good. They managed to steer the company into minimal losses and stayed FCF positive. Both the Chairman and CEO are recently appointed and yet they were able to lead decisively through the pandemic. As such, it means that the DNA of the firm is simply strong, capable of making the right decisions more often than not, allowing the firm to navigate the pandemic better than others.
The future of aircraft maintenance is harder to determine. Before the pandemic struck, one school of thought postulated that maintenance is in structural decline. Technology has improved and there is little need for expensive checks. More downtime means less time to fly passengers around. Well, with the pandemic, the trajectory has changed. There could be a strong recovery first before we talk about decline. But we also know air travel will not decline over the long run. The pandemic can stop us for two years, three years but not ten, fifteen years. Just look at Singaporeans traveling all over world the first chance we got!

Recovery in sight but there is a range of uncertainty!
SIAEC's chart above showed management's view of the recovery trajectory. From this, we can tell that management is thoughtful about their business while the future remains uncertain. While passenger traffic can grow, maintenance could be a different story. The saving grace is that SIAEC has JVs all over the world generating c.S$4bn of revenue cumulatively (via its JVs and its own businesses on an annual basis) and was instrumental in its strong performance during the pandemic. So, even if the whole industry goes into decline, SIAEC can continue to gain share.
But let's not get too excited. Remember the cardinal sin? There is a recovery in sight but it will take a lot for SIAEC to go to S$5. After five years and losing a few thousand dollar and a little wiser, the new range of IV could be closer to $3-3.5. This is derived using FCF of S$150m and giving it 20x and add its S$500m on its balance sheet, its intrinsic value is c.S$3.5bn. With its share count of 1.12bn, this works out to be S$3.1. Using more optimistic no.s would put that to S$3.5. So we have 40-60% upside while the downside should be $1.6 (-40%) at the height of the pandemic.

I will be taking profit when it hits $3-3.5.
Happy Valentine's Day! Huat Ah!
No comments:

I check in with visual capitalist once in a while. I would recommend all investors do the same. This chart is worth scrutinizing and see how it will change 10 to 20 years from now. 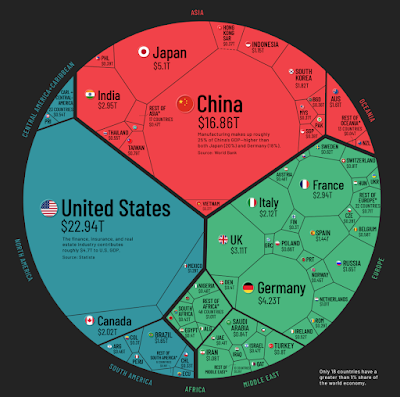 Jim Rogers famously said the 21st Century belongs to Asia. Well, look like we still need to grow. We are counting on India now!

Do check out the visual capitalist, they are awesome!