Another day, another enigma.

Tesla, a company that hasn't made profits cumulatively over the last 10 years, makes a mere 300,000 cars, is bigger than Toyota, Volkswagen, BMW, General Motors, Ford, Fiat Chrysler and Honda combined! 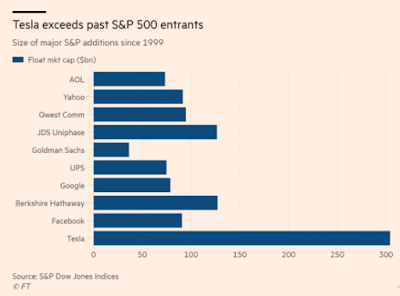 It also dwarf the recent inclusions into the famed S&P500 by a mile!

Well, maybe bcos it did finally generate USD1bn of FCF after burning USD10bn since its inception. Remember the market only looks forward, not backwards.

Or, we can attribute it to the Power of QE Infinity.

To Infinity and Beyond!

2020 will go down in history as one of the craziest year ever. A microscopic organism wreaked havoc causing millions of deaths. A US President who refuse to concede defeat and handover after losing the election. Meanwhile, in the midst of all these, Chinese spend USD74bn on a single day buying stuff, almost doubling what they bought last year on the same day. That's also 10x more than what's sold in the similar event in the world's largest economy - US Black Friday sales in 2019.
Intuitively, Covid and consumerism should not go together. We are still in the midst of a pandemic and millions of people are suffering from the loss of jobs and deaths of loved ones. But Covid has shown that we are so used to consumerism and our way of lives that we cannot help it. E-commerce sales went through the roof. Where tourism is again possible in parts of the world like China, people travel and spend. In fact, they spent more than usual. There is even a term for it - revenge tourism.
As such, a stock like Diageo is strangely, doing well despite less on-premise drinking in pubs, restaurants and events. Alongside other alcohol names like Moutai and Heineken but doing less well versus LVMH, the world's most powerful marketing machine. Diageo means day (dia) and the world (geo) in Latin, referencing to its global footprint (it operates in 180 countries) and encouraging people all over the planet to seize the day. Unsurprisingly, its company slogan is "Celebrating Lives, Every Day, Everywhere." 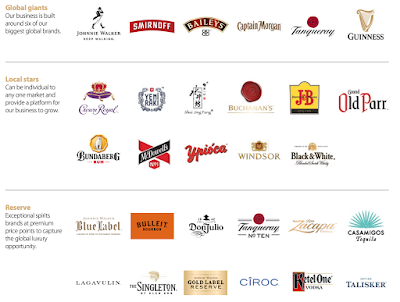 There is a lot of history with this company which is fascinating and insightful but for our purposes let's stick to what is important for investors. Diageo is the world's second largest distiller after Moutai and owns a portfolio of high quality liquor brands including Johnnie Walker, Smirnoff and Guinness. Its full suite of brands are listed above.
Its investment thesis is as follows: Diageo is a global leading spirits company that has compounded growth steadily since its inception in 1997. Its strong brands, coupled with good marketing, high market share and strong global distribution has enabled the firm to generate consistent, steady free cashflow (FCF) and high ROIC. Covid presents an opportunity to be able to buy it at a slight discount. At market cap of GBP67bn and projecting a strong recovery in FCF to GBP3bn in the future, its FCF yield is c.4.5%.
Diageo is also laser focused on shareholders. In its annual report, it listed its top three financial targets: free cashflow, return on invested capital and total shareholder return (see below). Diageo has done pretty well in all three and importantly, these are the exact metrics that investors are now looking at. Price earnings ratio (PER) and Return on Equity (ROE) are still important but they no longer tell the full story as well.

PER has been the preferred metric for decades but as companies learnt to manipulate earnings and manage this number, it became less and less reliable. As for ROE, it can be artificially inflated simply by raising debt and as such ROIC became a better return metric over time. PER and ROE has also become less meaningful with global QE. Cheap money means lower cost of equity demanded by investors and cheap debt. The former is the reason why we can no longer buy good companies at teens PER.
As we can see from Diageo's numbers above. It has consistently generated both strong FCF and high ROIC. What is impressive is that is has managed 12.4% ROIC despite Covid's negative impact. This goes back to the conundrum we presented earlier. Why are people spending and drinking during Covid? Are we just so consumed by consumerism that not even a pandemic can change our behaviors? Perhaps so. Single's Day crazy buying and Diageo's performance have validated this theory. 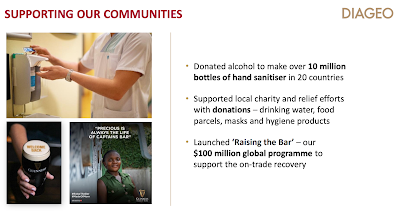 Diageo is a  also superb marketing company. One of the first slides on its investor presentation deck showcases its efforts during Covid to help disrupted lives. It sent out 10m bottles of hand sanitizers and spent $100m to help poorer communities. This is both noble and smart. The company is also acutely aware of global issues. Inspired by the #MeToo campaign perhaps, it launched a Jane Walker campaign in 2018 to support the fairer sex. Geez, just looking at it makes one want to buy a set of two! One for John and one for Jane. 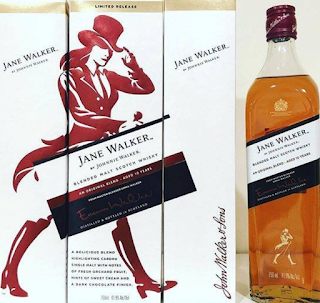 Over time, we shall delve deeper into the business, its positives and risks! Keep walking.
Huat ah!
No comments: