The pandemic bubble is upon us all. QE Infinity flooded the world with liquidity with the bulk of the benefit going to the haves rather than the have-nots. Let's look at the following few charts. 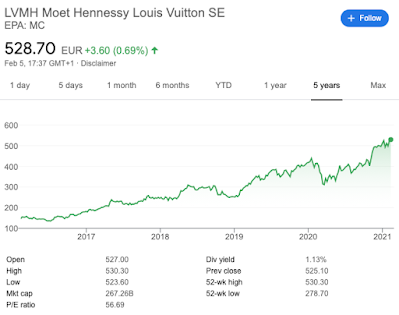 This is the 5 year chart for LVMH, the world's largest luxury company and it traded up swiftly after Covid19. LVMH represents the first class haves of the world. Their luxury portfolio includes, well, LVMH itself (the ubiquitous bag), Moet Hennessy (champagne), Mont Blanc (pen), Tag Heuer (watches), Tiffany (jewellery). The really aspirational coveted stuff. There are even more atas stuff like Hermes and Patek Philippe out there but they cater to super uber rich. Too niche. So, LVMH represents the haves. Hence I believe the chart above might be similar to how the wealth of the top 5-10% income earners would look like. 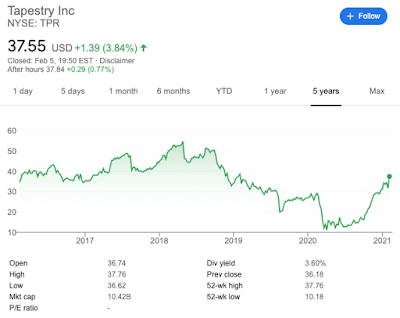 This is the 5 year chart for Tapestry. Tapestry used to be known as Coach. The mass luxury brand with a wider reach. It now has Kate Spade and hence the name change. Tapestry is luxury for middle income people. It did well in normal times, during 2015-2018, its share price was close to $60. Then it got hit terribly by the pandemic and the share price collapsed. Well, as things normalized, it came back. In my mind, this chart represents the middle income. We got hit but it's not so bad.

This third chart is the 5 year chart for AMC, the world's largest cinema chain. It wasn't really doing great because everyone is binge watching stuff on Netflix so the footfall to cinemas was already declining. Then the pandemic hit and literally nobody went any cinemas. Well they were closed anyways. So AMC fell like a rock. At rock bottom with share price $1.98, the reddit warriors who bought Gamestop decided they should support AMC too. So they cooked up a storm to squeeze short sellers (hedge funds who represented the haves and the uber rich and famous we talked about). Share price went up to $13 at its peak. Some short sellers did got hurt. But eventually, it collapsed because it's another mini bubble in the bigger scheme of bubbles from Tesla to Bitcoin. To me, this chart represents the have-nots. It is really tough. It's a one way street of dwindling wealth. It could be the biggest issue in our lifetimes - social class warfare. 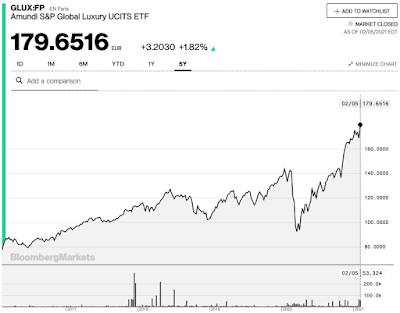 The stock idea here though is to buy a luxury ETF - GLUX. It has some of the top luxury traded names and it has done almost as well as LVMH (yes LVMH is also in it). The time is not right to buy now given that it is at all time high. But it is important to monitor this ticker because luxury stuff will get even more luxurious. Reddit warriors buying Gamestop and AMC would have done better buying this since their god - Elon Musk is also represented. Tesla is the largest component of GLUX. That is one risk though and the reason I haven't bought.

Let's keep monitoring and hopefully can huat on this ticker!

Rage and umbrage has become unacceptable as society progresses. Today, social media picks up everything. So, when you want to say something inappropriate, well, better think well!

Two days ago (7 May 2021), SPH CEO Ng Yat Chung took umbrage at a reporter asking a difficult question and the whole thing went viral on internet. This was a classic case of shooting the messenger since the reporter was just asking a question sent to her mobile phone. She obviously didn't ask it for herself and would be wondering why she was getting shouted at. 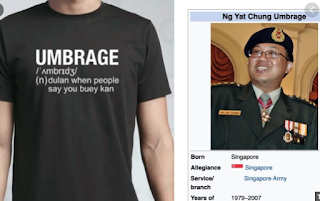 Actually, the CEO maintained his composure at the start, introducing to us a new word to enhance our English vocabulary. But his response grew more and more belligerent as he spoke. He denounced himself as a gentleman and then shouted almost savagely. This was the bit that caught the social media's attention. Now, we have umbrage T-shirts, advertisements and what not.

But the real people who really had to take umbrage were SPH's shareholders. SPH's share price had simply rolled downhill all these years. The chart below shows how SPH had always hovered at $4+ only to accelerate its decline after the current CEO took over. Then it got hit by the pandemic and collapsed even further. In the last few weeks, share price started to recover, perhaps because Singapore is vaccinating its population so well, but alas, the umbrage saga took it down by 15%! (Or may it was selling a profitable business at a negative price). 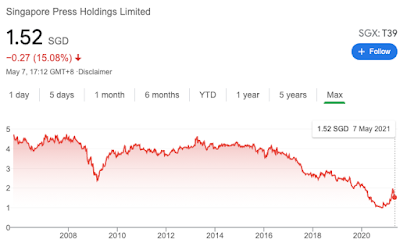 It is not entirely the CEO's fault. Running a declining business franchise is a tough job. Newspapers are distributed for free Today (pun intended: for non-Singaporean readers, ironically, this free newspaper is called Today) and I am not sure who still subscribes to the Straits Times. Maybe corporates and rich people who just want it to wrap their breakable stuff after those daily papers pile up. In this day and age, the way people consume news had also completely changed since the days newspapers were invented.

Newspapers were a huge thing in the past. Their economics were so good. They had both subscription and ad revenue and both were raking it in while they simply pay reporters peanuts to write stuff that everyone had no choice but to read. But the internet and social media changed everything because now everyone can be his or her own reporter and they wrote things people really wanted to read.

When the tide changed like this, it is hard for management in that business to adapt. Newspaper was a profitable business that will generate money even if you put a monkey to run it. Now, it has to fight  declining subscription, declining ad revenue and the social media. Warren Buffett puts it best:

To paraphrase, if the business is tough, then even brilliant management cannot win. I am not sure how brilliant our current SPH management team is. I hope they don't take umbrage :) But I am sure shareholders have taken umpteen umbrage seeing how their investment has declined c.70% over just a couple of years, not to the fault of anyone though. It's just business.

I don't think there is any easy way out for SPH. It is now a tough business. For the longest time, it was supported by its property business. Maybe there is an angle here by spinning off the tough media business and become a property company. It will take courage, not umbrage, to bring the share price back to its previous glorious days.

I read this book a while back and has forgotten the bulk of it. It's good that we are in the internet era. So many people wrote good summaries and made it easier to simply recall the main messages and even come out with new ones that are relevant to me now.
Autonomy and mastery: Daniel believes that people has the innate drive to achieve autonomy and mastery. Rewards and nagging rarely get us anyway. For those of us with parental experience, gosh, how true! Goals that we set for others seldom work if there is no buy in.
Goals people set for themselves, when we get there, we enter a state of flow. This is very blissful and this is the state that helps musicians create music. This is the state Michael Jordan is constantly in when he is on the basketball court. We all have experienced flow. We should strive to achieve flow in our work and life.
In office work, positive feedback, useful information and meaningful information can be more powerful that monetary reward. Positive feedback can be given and reminded. Useful information from bosses will be able to help subordinates complete their tasks. Meaningful information will propel innate drives!
Lastly, two quotable quotes from Drive:
“At the end of each day, ask yourself whether you were better today than you were yesterday.”
“One of the best ways to know whether you’ve mastered something is to try to teach it.”
No comments: