The Starbucks Experience is an interesting quick read that served to remind us what it takes to be the best. We have to think bigger and broader than our competitors and be the best that we can be. Here's two lessons:

1. Great companies (or great individuals for that matter) are always at 100%. Everything matters and no details can be overlooked. We all have our up and down days but to be truly great, we strive to be the best all the time. Great sportsmen, great companies are constantly doing that. That is what it takes to be at the top of the game.

2. Embrace resistance. Nothing in nature grows without facing limiting forces. To work with resistane effectively, one must distinguish between good and bad criticism. We take heed of good criticism while ignoring those that are not true. It is also essential to correct misinformation swiftly. By taking these steps well, we can then grow.

There are only very few retail food chains that has grown so big and sustained for so long. After reading the book, I gained a better understanding why Starbucks is one of them, always trading at very high PER and is currently a USD 120bn company despite its business being brick-and-mortar and being hit badly by the coronavirus.

This is a stock that I would love to own someday. Happy holidays and wising everyone a huat 2021 ahead!

The Fall and Rise of Disney

In March 2020, when the coronavirus hit the US and everyone panicked and bought all the toilet paper off supermarkets, Disney's share price was flushed into the sewers as well. Its theme parks suffered with catastrophic fall in revenue as visitors number collapsed. Its movie business was similarly hit as people stopped going to the cinemas. Share price fell from USD 150 to USD 85. This stock was labelled as the covid-hit name. Avoid it like the plague! 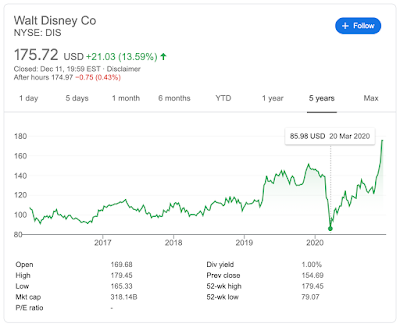 Fast forward to December 2020, its share price hit USD 175, an all time high. Its market cap at USD 318bn is almost 50% bigger than Netflix and also Comcast, owner of Universal Studios. It has beaten Netflix at its own game with the spectacular success of Disney Plus, its newly launch streaming service. Disney now boasts c.100m subscribers across its various streaming services (Disney, ESPN and Hulu). While this is still smaller than Netflix's 195m subs, Disney has far superior content and should catch up in time.

The Walt Disney Company (its official name) has always been a unique company. Its larger-than-life eponymous founder/creator built the company by creating a mouse, an animated rehash of a fairy tale about a maiden and a poison apple and then dreamed about theme parks where stars are born. They became huge successes and Walt Disney captured people's hearts and minds as one of the most intriguing rag-to-riches stories in modern times.

About 15 years ago, the company made a few spectacular acquisitions under the watch of Bob Iger, a visionary CEO. In 2005, Disney bought Pixar, the hottest 3D animation studio in town from Steve Jobs. Then in 2009, it bought Marvel Studios for USD 4bn. It was lauded as a crazy move because nobody was reading comics and just a few years ago, Sony paid just USD 10m for Spiderman. Back then (and here's the punchline), the most famous superhero wore underpants on the outside and he wasn't even a Marvel character.

Well, as they say, the rest is history. On hindsight, its success was almost inevitable.

To crown it all, in 2012, Disney bought out George Lucas and acquired all the rights to the Star Wars franchise (again for c.USD 4bn). It then launched the last trilogy in the original Skywalker storyline with a disastrous ending. But fans didn't care, they just couldn't get enough of Star Wars. So Disney created all these spinoffs on the various characters (pic above). The current hit, The Mandalorian propelled the franchise back into people's mind during COVID-19 and Disney racked it all in. This is Disney's way.

As the story unfolds, COVID-19 hit its Park, Experience and Products as well as its Studio Entertainment businesses bad, but its Media Network and Direct-to-Consumer (where Disney Plus and other streaming services are housed) will be picking up the slack and bringing the company's profits back (see table below). In terms of cashflow, the company has also shown its operational prowess by diligently cutting cost and preserving cash. It managed to generated USD 3.5bn of free cashflow in the year ending Oct 2020. 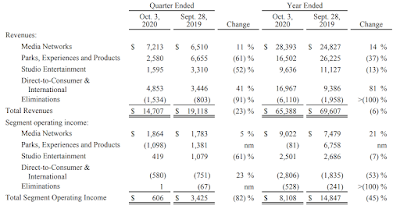 With its current all time high stock price, this is probably not the time to buy the stock. Today's valuation put Disney at 4.5x 2019 price-to-sales which is based on its pre-COVID historical high revenue and 25x 2018 PER. Again, this was the year it has its highest EPS at c.USD 7. In 2018, it also generated its highest ever annual FCF at c.USD 10bn. Off this high FCF base (who knows when it can do FCF of USD 10bn again, it could be 2022 or 2023 or beyond), it is trading at c.3% FCF yield today. It is not crazy internet valuation but it's just not cheap. We value investors need our margin of safety.
COVID-19 however did present the opportunity to better understand Disney. This is a solid compounder like 3M, Starbucks and Diageo. Compounders just bounce back much faster than mediocre, crappy firms. Disney has the best content and the best platforms: theme parks, stores and now streaming networks leveraging on its valuable first-class franchises, creating value simply by telling stories. Like the heroes in its stories, Disney is also bold, innovative and most importantly resilient. Disney doesn't need vaccine, it has immunity!

In future posts, we hope to dissect its various businesses and better understand this solid compounder.

This is the way!