Chart of the Month #1

Investment is pretty much about ideas and insights. Ideas about innovation, trends, moats help investors think through their stocks and find out those that could ride the trend while keeping competition at bay. Insights help us see what others are not seeing yet.

A lot of ideas and insights come from charts and hence this series is to highlight charts, tables that bring across these clearly. In this inauguration issue, we look at the demographics of Asia. 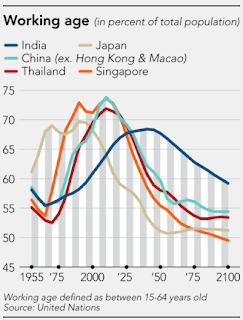 The chart above shows that Asia is seeing peak working population in the next decade. With the exception of India, most Asian countries will see a decline in working population. Japan has already gone through this phase and with that its stock market stagnated for 20 years. Hopefully, with Japan's lessons and incorporating US's innovation and capitalism, most parts of Asia can avoid that fate. 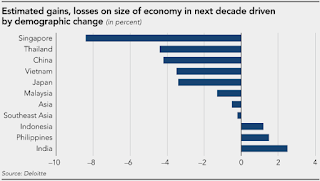 The next chart shows the impact of the drag on the economy for the next decade if we do nothing. Singapore will see the biggest drag from demographics, followed by Thailand and China. We may need to import a lot more people than we like.


Once in a while, on this infosite, we discuss Singapore's education system, which, in my opinion, is mutating uncontrollably into something that is ready to implode any time. While researching for this post, it reminded me of this Japanese cult anime called Akira that depicted an apocalypse future where kids with psychic ability (like 100 times more powerful than Star Wars' Jedis) wreaked havoc and destroyed cities. In the scenes below, the kid with psychic ability was not able to control his power and mutated into a huge monster that ended in a la-nuclear explosion (if I remember correctly). The day was saved only (or partially saved) by a miracle. Again, spoilers ahead in case any reader here would ever want to watch Akira. 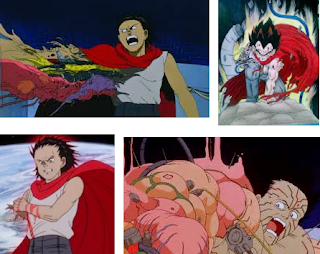 
In some ways, our education system is really like a monster than had been mutating and mutating all these years and looks like it would further mutate wreaking havoc for Singapore. In some ways, we are seeing some warning signs: more and more teenage suicides, the recent infamous NDP middle finger boy, Amos Yee, just to name a few. So what's happening?

In the past, we discussed these issues, poor working environment for teachers, school rankings, kiasu parents, elitist system, syllabus that was way too mature for primary school kids amongst others. I would say that over the past 20 years, these issues were simply compounded as one detrimental issue added on top of another. It's some kind of compounding mutation like what happened to the kid in Akira. He was actually a fine lad in the beginning.


To better illustrate this point, we look at another manifestation of the problem that is how parents tried to tackle the issue with creative solutions, how the system accommodated and how this got crazier and crazier. I would say that there wasn't a problem 30 years ago, when I was in primary school. Back then, we were just interested in getting kids to school, making sure we got the literacy rate up. The problem really started say some 15 years ago when parents realized they needed to upend the system to gain an advantage for their kids in our small little red dot. So these pioneer mutation experts gamed the system by preparing ahead of the syllabus and/or trying to get into good primary schools on Day One. Back then, there was no need to volunteer to get into good schools like Raffles Girls or Nanyang. It was free for all.


Then some 10 years ago, the good schools started to feel overwhelmed since everyone wanted to get in and they created the damned volunteer system. This was the beginning of the end since only privileged families can afford to do the volunteer hours. Then the hours lengthened. And lengthened. Today, it stands at 80 to 100 hours for the best schools. Other parents, thinking ahead started preparing for GEP to try to game GEP - the gifted education program that allow kids to skip PSLE and also in other ways (direct admission), secure a path to good secondary schools and higher education, even though their kids may not be gifted.

Then there was the huge tuition problem. After years of parents preparing kids ahead of the syllabus, the schools started to teach less and less, outsourcing real teaching to the billion dollar tuition industry. But as the game progressed, it's not just any tuition that would allow the kids to smooth-sail through PSLE. About 5 years ago, polarization in the tuition industry happened, with Learning Lab and lots of other star tutors and star centres paving the way for elite tuition. Only by paying up can students stand a chance to be good at PSLE.

To sum up, over the past one or two decades, our education system didn't evolve to be more robust to deal with these changes. It let the mutations grow like cancer. 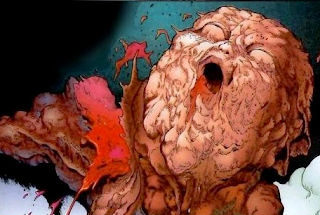 
Today, the mutation had gone truly wild. In fact, the tables had turned and it might not be feasible to go into the good schools unless the parents are willing to fork out thousands of dollars every month to keep up with the system. It might be better to be in a good class in a good neighbourhood school, with young and energetic teachers. Coupled with tuition, the kid stands a better chance to do well in PSLE. This problem came about because of the lack of good teachers.


You see, MOE (Singapore's Ministry of Education) had been losing the good teachers for years, so the ratio of good teachers in the system could be just 20-30%. These teachers would be assigned to the best classes. So in good school, it is more likely that an average kid would not be in the best classes hence getting the poor teachers. While in a neighbourhood school, the reverse is true. If a kid gets a poor teacher, it takes a lot more effort and tuition to catch up. The kid is also less motivated. In school, he is not taken care of by the poor teachers, and he has to go for lots more tuition which makes him tired. All these further exacerbating the issues, making the mutation worse.


We learnt that compounding is a good thing in investing. Returns compounding at 10% makes our money double in 7 years and quadruple in 14 years, growing 8 folds in 21 years, meaning $100k can become almost a million over two decades. This similar concept works in reverse in MOE. The mutation is compounding and has intensifying the problem for all primary school kids and their parents. Now that MOE is going to preschool, it might be more cancerous compounding.

Some might argue that it's the parents fault. It might be, but we discussed this before as well, we cannot stop an arms race or much less girls wearing higher and higher heels wanting to look tall and beautiful. Similarly, we cannot stop parents from being kiasu. Some also argue this is what it takes to be really good, to win global math and science Olympiad competitions. Maybe, but why drag the whole nation into this race, not every student can be Joseph Schooling. The system cannot just be catered to produce a few Joseph Schoolings while decimating childhood and causing teenage suicides.


Some say it's about building character, building resilience. Again that's true. But we also use that reasoning for conscription. Army sucks, we still dig trenches, something important maybe a hundred years ago to escape artillery bombing during WWI, but today people are bombing with drones. So, we carry ET stick and blade for what ah? Some say, in the army, we learnt almost nothing useful for working life but we say it builds character. Army builds resilience.

Alas, the more I think about it, I believe it cannot be truly fixed. I thought we could some years back (see other posts in the Education label). But we have mutated beyond the point of no return. The partial solution could be scrapping PSLE. This could be good enough for the next decade or two. We would spare young kids going through this proverbial MOE's baptism of fire before puberty. Most countries have their students tested at university entrance exams, usually at age 18. Singapore is unique that we do it at age 12. If we scrap PSLE now, we dial back the mutation somewhat, but the trajectory is unlikely to change, we are heading towards South Korea's path.

Here's an excerpt from Wikipedia about South Korea's education system.

The system's rigid and hierarchical structure has been criticized for stifling creativity and innovation and is also described as intensely and "brutally" competitive. The system is often blamed for the high suicide rate in the country, particularly the growing rates among those aged 10–19. Various media outlets attribute the nations high suicide rate on the nationwide anxiety around the country's college entrance exams, which determine the trajectory of students entire lives and careers. Former South Korean hagwon teacher Se-Woong Koo wrote that the South Korean education system amounts to child abuse and that it should be "reformed and restructured without delay." The system has also been criticized for producing an excess supply of university graduates creating an overeducated and underemployed labor force; in the first quarter of 2013 alone, nearly 3.3 million South Korean university graduates were jobless, leading many graduates overqualified for jobs requiring less education. Further criticism has been stemmed for causing labor shortages in various skilled blue collar labor and vocational occupations, where many go unfilled as the negative social stigma associated with vocational careers and not having a university degree continues to remain deep-rooted in South Korean society.


Well again some Singaporean parents are thinking ahead, pulling the kids out of the system if they could. Already, 20-25% of every cohort now go outside the conventional route in secondary schools. They could be in international or private schools and I believe more and more parents are also sending their kids overseas at the junior high level if they could.

The ultimate ideal model is the Nordic education system where the best teachers (all Masters and PhD holders) are put at the core of the system and they believe in the true altruistic learning philosophy making sure that learning is enjoyable, done at the child's pace and ensuring that no child is left behind. This is the direct opposite of our system that emphasizes about ranking and results, commoditizes teachers and the teaching profession and ensures everyone is left behind except the elites. To be fair this is an Asian phenomenon and no Asian nation had successful replicated the Nordic model.


In Akira, the world averted a catastrophe with great sacrifices and the ultimate reset - a Big Bang that gave birth to a new universe. Perhaps that's the miracle we can hope for in Singapore's education conundrum.
No comments: