This is a quote originally from Carl Jacobi, a German mathematician but has now been attributed to Charlie Munger, Vice-Chairman at Berkshire Hathaway, investing partner alongside Warren Buffett. Munger used this phrase so many times in so many of his books that value investing students would have to come across it sooner or later.

Inversion is a technique used widely in math to solve problems by reversing the thinking to come to some kind of solution. In investing, Charlie encourages us to also always invert to see through issues that are not easy to do so conventionally. Today, we would like to discuss three topics about inversion and hopefully gain some insights about using this technique in the future.

Satoru Iwata, the late President of Nintendo was perhaps one of the most brilliant executor of inversion. Sadly he passed away this year before being able to steer Nintendo to greater heights after its successful launch of Wii some ten years ago. Not sure if most readers would remember, during 2004-2006 the gaming market was an epic battle of specs between Playstation and Xbox. Back then there was no mobile gaming, PC gaming was very niche and game consoles were the main devices that people played games with. Sega was dead after it lost out to Playstation and everyone thought that Nintendo would follow Sega.

Sony and Microsoft were well funded to develop game consoles that were going for higher quality graphics, faster controllers, more storage, customized computer chips to run these machines. Nintendo had neither the cash nor the resources to compete. Hence Mr Iwata decided to invert the problem. The problem was not about what core gamer wants, which was thought to be all of the above: graphics, speed, specs and all. The problem was how to get the non-gamers to play games. 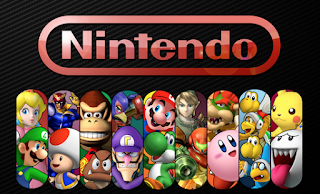 Nintendo and all its cute characters!

The answer was the Wii. It had none of the graphics, nor speed, nor specs. It was cutesy Nintendo characters and the innovative wand controllers. It was about making game play much more accessible to non-gamers and it worked! Wii sold more than 100m units and Nintendo at its peak became the 3rd most valuable company in Japan. However the Wii also opened the market for casual mobile gaming as people caught on to how games should be made simple, addictive, fun and on the mobile phone which was in everyone's pocket all the time. Nintendo did not catch this mobile gaming trend fast enough and went into losses. But Iwata-san was quick to react and switched the firm to join the mobile bandwagon last year. Again by inverting the logic that Mario games should only be played on Nintendo devices.

Iwata-san did not live to see the fruits of his legacy as he succumbed to cancer that plagued him for two years. He worked till the final days of his life, giving all he had for the firm, for the shareholders and for Nintendo fans. Iwata-san has my full respect as an innovator who dared to invert mainstream logic and brought the firm to a soaring success never reached before and will likely be renewed with the direction that he set by moving into mobile gaming. Rest in peace, Iwata-san!

The second and third topic would be around TED videos that I watched recently that really opened my mind to issues that are really important. Do read on carefully! Before watching, I was pretty much thinking the same way as most people would, but the videos showed that by inverting, we get to enlightening solutions. The first one is on charity and the second one on happiness and work.

On charity, the consensus thinking, which was also my thinking is that charitable organizations should never aspire to pay its staff market compensation. They should also work with a low cost to donation ratio (like 10-20%) and spend very little on growth. But the speaker argued that all these were wrong and if we continue to think the way we did, we would never solve any of the world's biggest issues like poverty, cure for diseases or helping the disabled and the less advantaged.

The speaker gave powerful examples to illustrate these points. Most memorable being that a CEO of a charitable organization could only be expected to receive $80,000 a year while a CEO of say even a small SME would be paid $200,000 and an MBA graduate would be paid much more than that as they reach the peak of their careers. So these folks could donate half their income, seat on boards of charitable organizations to supervise the poor CEO and be recognized for doing good charity, enjoying fame, status on top of being rich. So who in the right mind, with the capabilities of a SME CEO or earning an MBA would want to be that CEO of a charitable organization and really do all that heavy duty stuff and yet get supervised by MBA grads?

Well, for those really interested, I strongly encourage you to watch the video:
https://www.ted.com/talks/dan_pallotta_the_way_we_think_about_charity_is_dead_wrong

The solution was really to invert and think big. For charity to really become a force to reckon with and solve the world's biggest problems, they have to be for profit corporations, not non-profit charitable organizations. This is inversion at its best!

The key to happiness is not about goals and ticking boxes. It's to train our brains with the few simple things below:

1. Write down notes of gratitude for one thing and one person daily
2. Share a moment with our loved ones
3. Perform a random act of kindness
4. Exercise or engage in some physical activity: gardening or photography
5. Meditate or contemplate our day and update them in a journal

Time to invert and transform our lives!

While the global stock markets rocked in choppy waves of unprecedented volatility in the last two weeks, Singaporean investors were probably busy following the campaigns of the current elections. This round to me seemed less interesting vs the previous cycles where we saw various tumultuous sagas involving CCTVs, sweet young things vs sweet young things, Dr Chee shouting at PM Goh like a gangster, Cheng San GRC (for those of us old enough to remember). This round we pretty much got to get excited only about this Titanic poster below.

For the un-initiated, this was an argument using the analogy of cruise ships. PM Goh liken PAP as a solid cruise ship with a final destination while WP is a gambling cruise ship sailing to nowhere. To which Mr Low replied that perhaps the more apt example would be comparing Singapore to Titanic, which sank. PM Goh then replied Singapore had  been sailing for 50 years, while Titanic sank on its maiden voyage. Creative Singaporeans then created the poster. Who says we cannot innovate?

The Father of Value Investing, Benjamin Graham left this quote some 70-80 years ago: "The stock market is a voting machine in the short run but a weighing machine in the long run." Some things just don't change. We tend to vote with our hearts, not our minds. Hence we keep seeing actors, boxers, prominent people getting voted into government all over the world: Ronald Reagan, Manny Pacquiao, Arnold Schwarzenegger just to name a few. But what is really important in both elections and stock picking is really to see through the rhetorics and power acts to the essence and make rational choices.

In investing, that's about understanding and then selecting really strong businesses and buying them at the right prices. It's an art that would take a lifetime to master. Yours truly is still working on it after 10 years. In tomorrow's polling, it's another kind of selection, akin to giving a Facebook "Like", obviously, much more important and with serious consequences. So give it a good hard analysis as we would when we analyze and look at stocks.

A weighing machine will not lie. It tells you where you were before and where you are now. Humans take about 20 years to grow from 2-4 kg at birth to an optimal 40-80kg. Well, a lot of us continue to grow laterally, exponentially, massively after that but that's another topic. :) Both gaining and losing weight significantly are not easy manoeuvres. Changes will take time to be reflected. Hence the analogy that the stock market is a weighing machine. Over the long run, great companies see their stock prices follow exponential curves, mediocre ones fall flat or slope downwards. Nations follow the same paths. 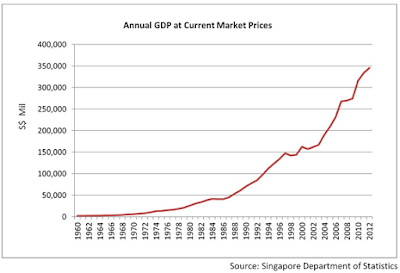 Singapore grew spectacularly in the last 50 years. It will be quite unlikely to repeat the same growth in the next 50 years. Nor do Singaporeans want that at the expense of lower quality of life. A lot of election topics revolved around the price we paid for our spectacular growth: foreign workers, MRT breakdowns, rising cost of living etc. But we do need to keep improving. Growth is the only way forward. It may not be economic GDP growth at 8% but we do need some form of growth: entrepreneurial or perhaps cultural or at the individual level (ie you and me) spiritual growth.

Our decisions tomorrow would decide the growth trajectory over the next five years. Will it be giving up some GDP growth for better quality of life, or continuing GDP growth at all costs or poorer growth in all aspects? It will be our choices!