I have invested in Berkshire Hathaway for a decade or more based on the most simplistic investment thesis: this is Warren Buffett's company and he is the world's greatest investor. There was very little further due diligence after that. So is this investing or speculating?

"An investment operation is one which, upon thorough analysis, promises safety of principal and an adequate return. Operations not meeting these requirements are speculative." - Ben Graham
To satisfy Ben Graham, Warren Buffett's teacher, this post is a quick dive into of Berkshire Hathaway.
Here's a few numbers which should be read as average over the past few years:
Revenue c.USD250bn
Cashflow from operations c.USD40bn
Capex c.USD15bn
Free Cashflow c.USD25bn
Total assets c.USD870bn
Total equity c.USD440bn
Based on news report, Berkshire has rebounded with a 7% increase in overall profits with some of its businesses exceeding pre-pandemic levels. Cashpile is close to USD150bn and total equity portfolio has also rose to USD308bn and its market cap is now USD650bn. 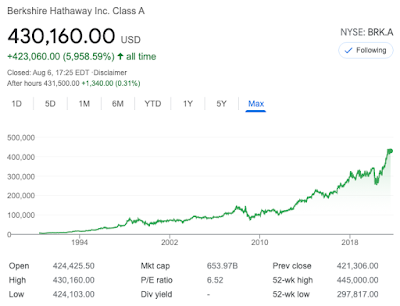 Berkshire is the lifework of the world's greatest investor. It has compounded its value over the last 50 odd years, and should continue to grow its intrinsic value beyond Warren Buffett and Charlie Munger.
Merry Christmas and Huat Ah!

Email ThisBlogThis!Share to TwitterShare to FacebookShare to Pinterest
Labels: Buffett

This is an interesting chart from the Economist last month. Optimal offshore wind locations are at a certain latitude and we just need to build 500k offshore wind turbine to contribute to 7.5% of global energy output. 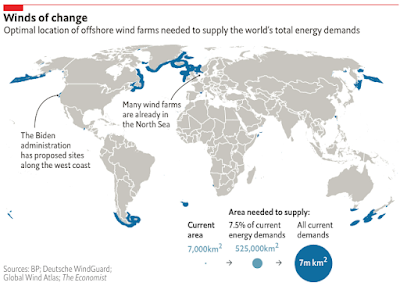 Well, we are not starting from zero, we have 7,000 today. And to power the whole world, we just need to 7 million wind turbines at these optimal locations.

I have never studied Economics academically and always felt it was my impediment as an investor. Now that my kids are taking the subject in school, I got hold of their textbooks and took this opportunity to learn with them. Yes, learning never stops.

In the first lesson in Economics, we are taught that there are four factors of production that is needed to produce finished goods and services. These are the building blocks that form the basis of any economy. Originally, there was only three, but over time, as knowledge increases, the fourth factor was added.

1. Labour: this refers to people, workers and manpower that make things and create services. People are also consumers and as such the largest economies tend to also have the largest populations.

2. Capital: this actually refers to financial and working capital (ie money in layman's term), fixed capital (equipment, servers, buildings) and also other forms of capital such as R&D and intellectual property.

3. Land: this is raw land and also the resources like copper, oil and gold under the land. This also includes forests for timber and water reservoirs.

4. Entrepreneurship: this is human innovation and the ability to harness the top three factors and ingenuity to generate economic growth.

In the early days leading to the independence of Singapore, economic theory postulated that we could never have created any kind of economy since we have limited capital, labour and entrepreneurship. The biggest problem was that we didn't have land. We didn't even have enough water. Our forefathers really reinvented themselves to lay the foundations of the country and the abundance we have today.

But it's fortunate we started in the 20th century and it became possible to create an economy and relying a lot on entrepreneurship and innovation.