I have had a lot of interesting discussions with a lot of people on Singapore property over the past few years. It's always an exhausting though thriling intellectual debate especially when you are the only non-consensus view in the whole room. Yep, I was the only bear and it was a really good time for bear bashing: property prices can only go up in Singapore, there are so many rich people, even if prices fall, they will buy up everything! Look! The Marq is selling for S$3,000 psf. Sky Habitat in Bishan just sold for S$1,700 psf, see how wrong the bear is...(Yep a very bruised bear...)

Everyone became a property expert (though I did always profess that my expertise is in stocks, not property, which perhaps gave them a reason to shout louder). Yet I can remember the days when nobody talked about property as it was actually not so long ago. In 2005, my block had 30% empty units. Blocks of unsold flats stood in Sengkang and Punggol. At one point there were 10,000 empty flats. Marlboro Tan, our ex HDB Minister, was slammed in Parliament for overbuilding and costing taxpayers money. Hence he resolved not to build more HDB than needed (and we now know what happened next). These were interesting bear stories that most people choose to forget. Today the bulls have 1,001 reasons why Singapore property will rise forever. Below are the most convincing bull arguments:

1. Singapore's population is increasing to 6 million, the government has to bring in more foreign talent to keep the economy chugging along. There is a lot of demand for property so it will never fall.

2. Singapore is a safe haven and global money is flowing in Singapore, the rich Chinese, Indians, Indonesians and all the global rich and famous will continue to buy property here. Plus there are so many rich Singaporeans around. They will just buy everything if prices just drop 10%. So Singapore property will never fall.

3. Interest rate is so low, everyone can afford the mortgage. Even if prices fall, people can manage the mortgage. So who is there to sell? There will be no distress selling, in fact low interest rate will encourage more buying. Some will even buy to increase debt to fight inflation. So Singapore property will never fall.

For the uninitiated, Sky Habitat is the Capitaland development in Bishan (pic below) that was touted as a gamechanger a few months ago. Its first phase was launched at S$1,700psf and was 80% sold in the first week. Nobody has ever sold S$1,700psf in Bishan. Hence it was seen as a benchmark and the new normal for Singapore property. Hiterto, S$1,700psf was a price meant for prime areas in District 9, 10, 11 meaning Orchard, River Valley. Bishan though popular, was not supposed to be S$1,700. So when it sold well, Capitaland bid up the land next to it, at an exorbitant price, hoping to renact the success. Well, good luck cashing crashing in. 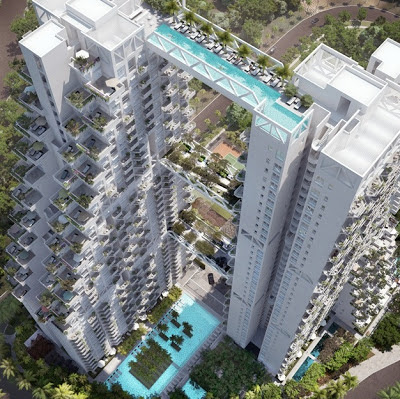 Okay, let's do a real good fundamental analysis here. Actually I did a few some time back in the Property label. But this series should serve to debunk the most bullish arguments. We start first by looking at supply and demand.

There is very strong demand - both from foreign talent and Singaporeans. This argument can easily be disputed with good demand supply analysis. Let's start with demand. We know that property demand from Singaporeans is about 20,000 to 25,000 based on the no. of marriages and also previous years of property buying (esp HDB buying). While we do not know the foreigner part we can estimate that it should be similar or just slightly less because there are 2 million foreigners vs 3 million Singaporeans. And when we get to 6 million population, it will be 3 million foreigners vs 3 million Singaporeans (since I don't think emotionless Singaporeans can make 1 million babies).

So, total demand for property should be around 40,000 units growing into 50,000 units in the future. In fact it has been less in the past few years at 35,000 units or so. Now let's look at supply. The headline no. that always jumped out is the 100,000 units that Mr Khaw, our new HDB Minister, pledged to build after a huge supply squeeze that Marlboro Tan brought about after his phobia of overbuilding. On the private property side, there is also another 80,000 units in the pipeline for the next few years. So rounding the no.s we have 150,000 to 200,000 units coming out say in the next 3 years.

So no matter how you play with the no.s we can conclude that we should see a huge over-supply over the next couple of years. Only in the most blue sky scenario - we see a maximum 50,000 demand for 3 years matched with 150,000 units being built - we can avoid a supply crunch. All other scenario will leave us with at least 10,000 of unsold flats all over Singapore (Again!).

Btw these are rough no.s that I gathered over past readings. There should be more accurate info on URA and Google. So interested parties can do more independent research (but do update back here!).

Next post, we talk about the rich and famous!