I have read many things written by Ray Dalio and his thought process simply never fails to amaze me. He has published a new book which I have not read but cannot wait to. He continues to think and write despite his age (72 and going strong). The following is something he wrote recently when commenting about the Russia-Ukraine conflict.

Having power is good because power will win over arguments, rules and laws all the time. When push comes to shove, those who have the power will either enforce their interpretation of the rules and laws or overturn them to get what they want. It is important to respect power because it is not smart to fight a war that will produce more pain than reward: it is preferable to negotiate the best settlement possible (that is unless one wants to be a martyr, which is usually for stupid ego reasons rather than for sensible strategic reasons). It is also important to use power wisely. Using power wisely does not mean forcing others to give you what you want ie bullying them. It is the recognition that generosity and compromise are powerful forces for producing win-win relationships, which are fabulously more rewarding that lose-lose relationships. In other words, it is often the case that using "hard power" is not ideal and that using "soft power" is preferable.

This paragraph is so powerful that I felt compelled to write it down here so that it will be part of my infosite and I hope to be able to practice what is written here as well as to be aware who in my circle is using hard power for stupid ego reasons.

We have all seen bosses enforcing their interpretation of the rules and we have all seen colleagues using power for stupid ego reasons. Most often, we are powerless to stop them at that moment. But we should learn from their mistakes and perhaps make records to note them down such that one day, we might be able to turn the tables against them.

1. Discretely deciding to use company's budget for meals by using power over secretaries to setup the meal with counterparty and colleagues, bypassing higher authorities.

2. Forcing the deal team to kill the deal by re-interpreting the criteria for new investment ideas which fit a pre-created framework. The deal would have passed the criteria but the re-interpretation meant that it now could not.

3. Using power to decide the fate of interns despite the verdict still being processed by the rest of the team and feeling happy about "playing god" over interns.

Back to Ray Dalio, I think the quote above list out all the important tenets about how we should use power. People who play with power are up to no good. They are political, egoistic and generally do not add value. So be careful with people who abuses power and also the companies that have these people.

Experience have shown that even under the best forms of government, those entrusted with power have, in time, and by slow operations, perverted it into tyranny - Thomas Jefferson

With power comes the abuse of power. And where there are bosses, there are crazy bosses. It's nothing new. - Judd Rose

Those who have true power share it, while those who hunger power abuse it - Royalton Ambrose

It has been a long while since we discussed financial ratios. The last post was more than 10 years ago (although it was edited in 2016). Today we hope to discuss Tobin's Q and how it can help us in our fundamental analysis. First let's define what the heck is this ratio about.
From Wikipedia:
Tobin's q (also known as q ratio and Kaldor's v) is the ratio between a physical asset's market value and its replacement value. It was first introduced by Nicholas Kaldor in 1966 in his article "Marginal Productivity and the Macro-Economic Theories of Distribution: Comment on Samuelson and Modigliani".
It was popularized by James Tobin, a Nobel laureate who did creative and extensive work expenditure decisions, employment, production and prices in finance. He famously stated:
1) the numerator, is the market valuation: the going price in the market for exchanging existing assets.
2) the denominator, is the replacement or reproduction cost: the price in the market for newly produced commodities. We believe that this ratio has considerable macroeconomic significance and usefulness, as the nexus between financial markets and markets for goods and services.
There are various formula for Tobin's Q and one of which is the basic price-to-book ratio. But the version that I think makes the most sense is the following:

Courtesy of Investopedia
There is a full explanation on investopedia so I will not go into the details here. As with price-to-book, the concept is that a company's market value (i.e. stock price or market cap) should approximate its replacement cost and therefore the ratio should always be close to one. Alas, as stock prices go, it is everything but.
Today, price-to-book ratios usually go into teens for good companies (which is the usual level for price-to-earnings in the past) and in most analysis, it is no longer a useful measure. What is more important could be free cashflow, price-to-earnings (the starting point is usually teens and we try to determine whether 30x is too expensive) and growth rate.
Tobin Q can also be used for the entire stock market. Since 1945, the Federal Reserve publishes a quarterly Z.1 Statistical Release which provides the raw data for the q ratio's calculation. There is also data using different sources before that. For more details, please refer to the following salient update from Advisor Perspectives:
https://www.advisorperspectives.com/dshort/updates/2021/12/02/the-q-ratio-and-market-valuation-november-update
What is important with such ratios usually is to compare the numbers across its history. The following chart shows that the Tobin's Q ratio is at its highest level ever. This is even higher than the level reached during the dotcom bubble for the entire US market. There is argument that the raw data understates the denominator, as such, the ratio rarely dipped below 1x over the last 20 years, but still, we cannot say the market is cheap or fairly price. We are quite far from that. 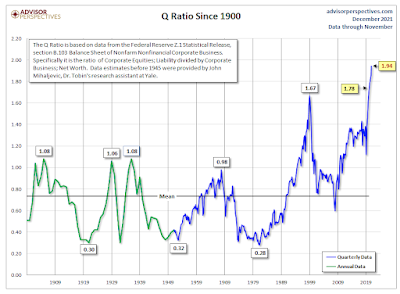 Courtesy of Advisor Perspectives
A lot of luminaries are saying we are in the mother of all bubbles, this ratio is another datapoint confirming the danger. It pays to be prudent now. Be fearful when others are greedy, but this time, cash may not be the safest hiding place, so we may need to diversify. It might be worthwhile to look for companies trading below 1x their Tobin's Q ratio and many other asset classes including gold, crypto or hard assets.
No comments: