This post is related to the last one regarding probabilities and payoff and how we should bet.

We often hear about people betting their life savings of $100k on the next property of say $500k, hoping for that 20% rise before TOP and make $100k return (with a capital base of $100k). Lets see how this works in that matrix thingy we used in the previous post:

In real life, and not just paper math, if the 30% probability becomes reality, this guy is stuck with a $500k 30-yr mortgage on a house worth significantly lesser, he may have cashflow problem and need to sell out some time in the next 30 yrs, or declare bankruptcy. As we know it, his life is over. Well at least financially that is. He will never achieved the much coveted financial freedom, a nice cosy retirement nest egg and the kind of crap Robert Kiyosaki likes to preach.

Anothe way to look at it, we can think of such bets as extreme as this Russian Roulette game:

1 shot of out six has a real bullet.

If you win, you get paid $5mn, enough for a lifetime. (Well at least for me, I dunno about you though)

If you lose you die.

Odds are in your favour: ok let's make it even better, we have a revolver that can house 20 shots.
So only 1 in 20 chance you will die.

19 in 20 chance you never have to worry about money in life.

Betting when the downside is something we cannot afford to happen is not a good way to bet. Think about this when you are faced with such choices.
12 comments:

This is something that relates to the Kelly Formula but at a much more simplistic level.

Basically, it all started when some friend of mine had the idea that if we are 80% sure of a 10% upside, we should be punting big on this event?

Eg. we heard a rumour that the CEO of TSMC saying he wants to buy Chartered for $2.20 (Today closing price $2.00) from the secretary of the CEO of TSMC and he will announce it tomorrow. How should you bet?

Mathmatically, this event can be illustrated with the matrix below.

In the first scenario, there is a 80% chance you earn 10% and in the 2nd one 20% chance you lose 20% bcos say for some reason, he did not announce it the day after, or something unexpected happens. In life, nothing is 100%, even if you are the TSMC CEO yourself, you cannot say for sure if you can make the announcement as planned. You might get murdered, or something else etc, Anyways, as such is the case, the expected return is actually about 4%, which is, well, lower than market return of about 5-8%pa.

In value investing, I think the matrix looks like this:

There is a 40% chance you will lose 30% of your money, but a 60% you make 50% (remember margin of safety and other safeguard put in place?) Your expected return is 18%. If you make enough of these during a lifetime - you are a clear winner.

The caveats here are:

1) your analysis must be quite accurate, ie the intrinsic value is really 50% higher than current price

You might think this is just bcos I am promoting value investing. But if you play around with the probability and payoff you can still get 10+% payout on average, which would translate to only 2-3%pa but still it's positive number.

Back to the TSMC case, you can argue that the 4% when translate to annual return becomes 1200%pa. Spectacular! However the logic would be that you won't get to hear a rumour about a takeover 300 days a year... So looking at the absolute expected return no. regardless of the timeline becomes important. And if you play around with the probability and payoff for this, you do get negative numbers.

So with this in mind, hopefully you can do this simple exercise with your next stock buying and practise more value investing rather than punting!
2 comments:

Best Of The Best 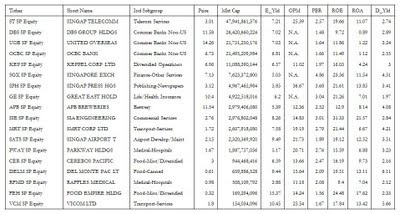 Sorry I have no clue as to how to make the image bigger, so pls click on it to see the whole damn table.

The ratios you see are also 10 year average ratios, hence they will look different from what you get in most places. This is adhering to what Ben Graham taught. Looking at the performance of the company over a long time frame to smooth out any economic cycle, boom and bust that the co. went through, and most importantly bring down the no.s especially if the company had had spectacular growth in the last 1-2 yrs.

And finally, disclaimers, buying stocks listed here won't guarantee that you will make money. If really these stocks here can make anybody rich, I won't be blogging here my dear!

Anyways, do take a look and see if you agree these are the best of the best listed on SGX!
5 comments: