This year's dividend list is out! Dividend related topics have consistently been popular and this year we would like to introduce Poems screening tool to generate your own list. Poems have been one of the strongest Singapore brokers over all these years, despite it not being part of a bigger conglomerate. Perhaps, it's precisely because it's not part of any conglomerate that it understands what the small investors need.

Here's how the screener looks like (below). There are only a couple of factors to choose from, but it's good enough. For this year's list of Singapore stocks, I have chosen just a few criterias:

1. Market cap of more than a billion 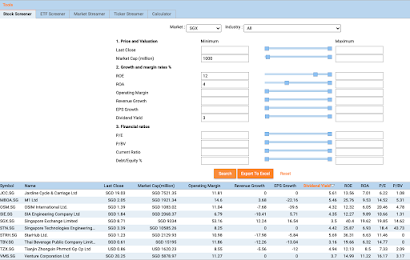 This year's list is interesting given the backdrop of the global pandemic. While some global markets have recovered, Singapore has not. Many of our large caps are directly affected by COVID, like our beloved national carrier, and related to that, our aerospace names like ST Engineering and SIA Engineering (both shown here). Next, our oil and gas names are affected. With nobody flying and moving around, oil demand collapsed. Oil prices went negative in March!

So, Keppel, Sembcorp and Sembmarine were impacted badly. They in turn hit our banks. With these names making up the majority of the STI, this could be why global investors shunned Singapore's stock market. Given our dependency on the big global players for export and trade and tourism, our economy and businesses are also impacted badly. But fear not, QE Infinity will save the day!

With or without QE, there are always interesting individual stock names.

Jardine Cycle and Carriage is a stock discussed before. There could be an opportunity to buy here given it's now below its rights issue price in 2015! It went all the way to $47 and then collapsed during COVID, since no one's in the mood to buy new cars. The lesson to be learnt here is that Singapore, because of our environment, will have very few long term buy-and-hold stocks. I thought JCNC could be one,  unfortunately, it did not turn out that way. I am glad I took profit when it was doing very well. So, one has to truly stick to Ben Graham's philosophy of selling when these stocks are near its intrinsic values.

Most of our Singapore names are not compounders, i.e. their intrinsic values do not go up exponentially. In fact, some of them do not go up. So we must sell when they trade near their intrinsic values and we buy only when there is a huge margin of safety to stocks' intrinsic values. Some of the names today might have that margin of safety today: Singapore Exchange, Thai Beverage. These companies have good business models and rarely trades cheaply. So at teens PE and 3% dividend yields, it's worth looking at more closely. 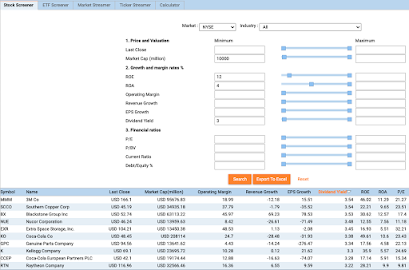 For the next list, we have our NYSE stocks. Poems allow for screening for a few exchanges and it is worth going through exchange by exchange. For the purpose of this post, I am doing just for NYSE. Using almost the same criterias, the screen churned out an interesting long list of names. Just to name a few: 3M (discussed here as well), Blackstone, Coca Cola and Kellogg. All of these give at least 3% dividend yield.

So while markets are near all time high, there are still cheap interesting names. We are seeing the very similar dichotomy seen during the dotcom bubble. IT and tech names populated people's mindshare and old economy names were forgotten. Today, the FANGs stocks make up more than 20% of the US indices and Nasdaq is at all time high. Tesla, making 300,000 cars is bigger than Toyota making 10m cars. Meanwhile, interesting old economy names like 3M and Coke continue to generate 30-40% ROEs but are trading at significant discount to loss-making companies.

Markets are as such. While they are efficient, they reflect the thoughts of all its participants and sometimes, these thoughts do not make sense. That said, we must always remember wisdom from the greats - John Maynard Keynes quote comes to mind:

"The market can remain irrational longer than you can stay solvent."

Don't bet the house on buying this list of names or go shorting FANGs or Tesla. Be prudent and do due diligence before betting. An investment operation is one, through analysis, provides capital protection and promises a satisfactory return. Anything else is speculation. Cheers! 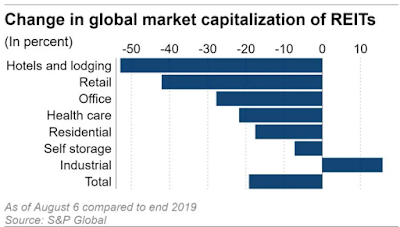 The world has changed since COVID-19, but I don't think retail and office will collapse 30-40% over the long run. Humans are creatures of habits and we eventually revert back to our old ways.

Although, travel will take a much longer time to comeback, so hotels need to have sufficient cashflow to tide over the next 1-2 years. Hope this helps!

I have not been able to put this book down for the last few weeks. Even though I read the very first version when it was published as a memo in pdf format many years ago. It was already very good then and I printed and kept a copy. But the book is 100x more awesome. If you have not read it, pls go pick it up today. This is one of the best books written ever.
For the un-initiated, Ray Dalio runs the world's largest macro hedge fund called Bridgewater. He is a multi-billionaire, made from investing and he attributes his success to his principles for work and life. Hence the eponymous book. He has never published his investment track record, but like Warren Buffett, he probably made most of his money in the earlier years. Bloomberg published a league table (below) a few years ago. 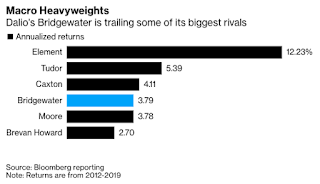 Bridgewater's returns
Well, track record aside. The book is a page turner because every sentence just made sense. At the core of it, as Ray puts it, life is about seeking the truth and embracing reality. More often than not, we do not want to face reality. We somehow believe that if we think hard enough, or want things bad enough, we can bend the truth. For instance, we want a nice body. No belly fat, good muscles, ideal BMI of 20. Yet, we do not schedule even an hour per week at the gym. We snack on potato chips, drink alcohol thrice a week and eat ice-cream all weekend. This is not understanding the truth nor reality.
Yes, we can change reality by scheduling and actually going to the gym. Until then, we must look at the truth in the mirror. The verdict can always change, as Mariah Carey has shown us. The right pic below is unflattering but apparently she is now fit again (in 2020). 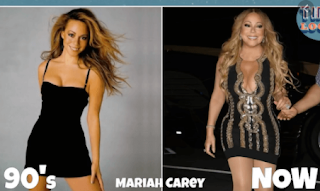 Mariah Carey: 90s vs 2018
Beating the markets is all about understanding reality. This reality takes the best minds to figure out. One head is not enough. Warren Buffett had Charlie Munger and George Soros had Stan Druckenmiller. So at Bridgewater, Ray Dalio made the best and the brightest put all their heads together and debate to seek the truth about markets. But it can be super tough. Smart people all have egos and all of them want to bend the truth to fit their own reality. So it takes time to figure out who's really interested to just seek out the truth.
To Ray, only 100% open minded and yet assertive people are able to achieve that. These people seek out others to disagree with them, in order to get to the truth. They will suppress their ego to do that. If they are wrong, they admit so, change their mind, reverse bets and make money. Closed minded, egoistic, smart people are the most dangerous. Naturally, nobody will volunteer to tell you they are closed minded and/or egoistic. So it took Ray 40 years to figure things out. Here's just a few best quotes:
1. Beware of assertive fast talkers, they use speed as a way to push their agenda past other's examinations. Slow them down, make sense of things before conceding.
2. Open minded people ask questions, closed minded people always tell you what they know, even if they hardly know anything. They are typically uncomfortable being around those who know a lot more than they do. Closed minded people will just waste your time.
3. Being open minded is more important than being smart. It is hard to be open minded and assertive. Some people are too willing to accept others' views at the expense of their own. One must be both open minded and assertive.
4. Watch out for people who think it is embarrassing not to know. They are likely to be more concerned with appearance than seeking the truth. These people go for style and form over substance.
5. Don't worry about looking good, worry about achieving your goals. Get over blame and credit and get on with accurate and inaccurate. The need for phoney praise needs to be unlearned.
6. Reflect on pain because pain leads to growth. Remember that the pain is all in your head. To evolve, we need to confront the pain and see clearly the paradoxes. Reflect, learn and resolve them. The past no longer matters except as a lesson for the future.
7. Don't be naive, most people will pretend to operate in your interest while operating on their own.
8. Everyone has opinions and they are often bad, including your own. Only listen to the believable ones who are open minded. After making sure they have demonstrated believability, with track record, reason and logic.
There are way too many nuggets in this book. Hopefully I can find time to organize more of them.
Hope this helps! Huat Ah!
No comments: