This is an continuation of the previous post on SIA Engineering (SIAEC).

As described in the last post, SIA Engineering has a solid business model that helps global airlines maintain their fleet. SIAEC's business moat is built on strong branding, economies of scale, efficiency which churns out high free cashflow and a high return on equity (ROE). It's also worth noting that the business is somewhat counter cyclical - when the macro economy slows and air travel is reduced, the airlines send more of their aircrafts for overhaul. This is shown in the same table (used in the last post as well) below which has 2010 and 2011 having strong FCF despite the world going into a slowdown after the GFC.

Okay, as promised, we would need to explain the rest of the table in this post.

For readers well-versed in DCF which stands for discounted cashflow, the calculations would be straight forward but for others, let's just walk through this a bit. We have described the left columns which are just historical FCF and we have the FCF projections under FCF Proj. Right in the middle we have the column "Discounted" with numbers starting from 245, 250, 254... finally ending with 235 and 225. This is essentially discounting all the future cashflow into today. Hence the term: discounted cashflow model or DCF model. The concept of discounting is the opposite of money earning interest. In finance, a dollar today is worth more tomorrow bcos money can earn interest. Putting into government bonds will earn 2% (well used to be easier, now we need to put it for 30 years to earn 2% per year, but still, there's interest income/return on capital). In any case, since future dollars are worth more, we should discount future cashflow back to today's dollars. The discount rate used is 8%. This is depicted as the WACC at the top right.

Now as to why do we use 8% to discount is a major convoluted academic argument. To some, it's still inexplicable, like why is Singapore's first ever gold medalist Joseph Schooling standing inconspicuously in a midst of pilots and Singapore Girls at his own celebration party. Humble as he is, Joseph probably doesn't give a damn how all these attention seeking corporates are leveraging off his big win. That's story for another day. In a similar vein though, the world's greatest investor Warren Buffett doesn't give a damn about the convoluted academic argument about discount rates. 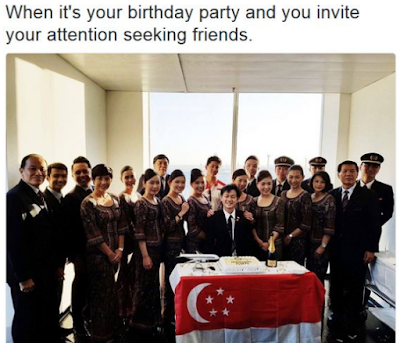 (Note: SIA Engineering is a separate entity from SIA)

But we need to explain WACC. WACC stands for the weighted cost of capital which is literally the cost of capital taking into account of the two type of capital: debt/bonds and stocks/equity. Capital is not free. Debt investors ie bondholders typically want to earn a low single digit return as their capital is more or less protected. Shareholders however stand to suffer permanent capital loss and hence it had been argued that the return that they earn should be a high single digit, which is why for our purpose, we have put in 8%, this knowledge site's namesake. For more, pls read this long article - Value Investing.

There are few more numbers that require some explanation: VCF, TV and IV (boy this is getting dry, but that's real investing, so bear with it!). VCF stands for the value of the cashflows projected which is essentially summing up the numbers in the discounted column. TV stands for Terminal Value.  This is the value of all the cashflows the firm will earn starting 2023 into perpetuity. Since we determined the cashflow from 2016 to 2022 (that's VCF), we need to determine the rest, and since firms can last forever, that's captured in the terminal value (TV). There is a formula for this:

As explained, WACC is also the discount rate of 8% (for simplicity let's just put WACC = discount rate), and Growth at the far right is at 2%. The Growth here is an important number. It is also called Terminal Growth, which means the final growth rate for the firm into perpetuity. In theory, this should be GDP growth ie only 2-3% or even 0% for some countries. There is no such thing as 10% terminal growth. Since nothing grows 10% into perpetuity (it gets too big and overwhelms everything else!). Finally we are getting close to the end.

Now that we have the TV we add VCF, TV and the net cash of the firm, we can finally get to its intrinsic value or IV. To be exact, it's the intrinsic equity value of the firm. Again it's:

But wait, all this number crunching, how accurate can it be? Isn't prediction futile? The answer is yes. As explained in the last post, all this number crunching is to just have a sense, most probably the numbers won't turn out right. In 2022, we shall see, more than half of those numbers would be wrong. So keep reading on, just eight more years! DCF modelling is just that - to give a sense. In fact, we should be doing multiple models. So here's another one below. This is the bear case model which have the starting FCF at a much lower S$200m and the T4 growth at only 5% for three years and then future growth at 2% which is same as the terminal growth. So for this model as you can see, the IVPS drops to $3.8 which means that there is no upside. Some might argue that's not conservative enough and we adjust the terminal growth to 1% and IVPS drops to $3.5 which was the stock price low in the last few years.

As you can see, the range of intrinsic value per share is from $3.5 all the way to $5.2. Now we are on to something. We have perhaps established that the risk reward is favourable. If things go really badly, the stock might drop to $3.5 ie 10% downside from here. But if things go well, then we have 36% upside or more. There could be a good bet here.

This is the crux of investing. We cannot predict the future. The future is a set of probabilities. We want to bet such that if it pans out the way we think it should pan out, then we make good return. But if it doesn't we don't get killed. In SIAEC's case, if it crashes to $3.5 and we lose 10%, we can easily make that back with two years of dividends.

This is why we love moat companies that pays dividends!