This is a continuation of an analysis on the Singapore property market. Interested readers can start from the first post.

So we debunked the three major bull arguments in the last two posts.

1. Strong demand. While true, it is supply and demand that matters and we saw that supply should outstrip demand in the next few years.

2. There are a lot of rich people to support prices. Rich people do not simply buy when prices fall. They are also governed by greed and fear.

3. Interest rates are low. This was partly the reason why property prices skyrocketed to stratosphere and caused instability in the system. Now that the system is on the verge of collapse, interest rates do not matter that much.

But what is most important, as in all investment, is always valuation or a methodology to gauge how cheap or expensive is the investment in question.

Singapore's residential property market has ranged from 2% to 5% looking at our own history. Most high end property today are closer to 2%. In stocks PE terms, this translates to PE of 50x - Facebook and Amazon trades at such crazy valuations. In the global property space, only a handful of cities trade at or below 2% yield, such as Taipei, Beijing, Shanghai and Monaco. The charts below give a good comparison where Singapore stands.

The other way to look at the 2% yield is to think about payback in years. At 2% you need to to rent the property for 50 years just to make back the capital (and this is simplistic bcos we are talking about gross yield and not net yield - ie after we take out taxes, downtime and other peripheral expenses like renovation etc). Some might argue capital appreciation matters not rental. But this argument is so absurd it is actually laughable. Why do I say so?

Essentially what the above argument means is that from 2% yield, prices can still go up further compressing yield to 1+% (Price and yield has an inverse relationship, if price goes up it means that yield should fall). Assuming that yield in Singapore actually goes to 1%, then it takes 100 years to make back the capital, and leasehold is only 99 years in Singapore. (Recently most of the launches are leasehold as developers realized it is actually much better for profits this way.) So isn't laughable that someone would buy something at $100, get $1 every year for the next 99 years, and be happy with $99 at the end of the century?!?

There is 1 country in the world where yield is at 1% level, it is Monaco. Luckily for Monaco, nobody actually lives there as it just a getaway for rich and famous. Yes, the rich and famous do like to pay $100 and only get back $99 after they go from ashes to ashes. But that's rich and famous for you. Of course, there are also no taxes, no restriction on foreigners and property ownership is freehold.

Back to Singapore, so what is the likelihood that yield goes lower to 1% matching Monaco, i.e. prices can still double from here or yield actually fall to historical norm like 4-5%, i.e prices fall a lot from here?

The answer is pretty obvious. Even if prices do not fall, it is hard to imagine a lot of upside from buying at such prices as yield should not go to 1% unless Singapore becomes like Monaco. Therefore upside can only come from absolute rental increase which can then support absolute higher prices. (In equity parlance, this means upside is coming from earnings growth and not valuation expansion.) Alas, our rental rates are already at a high level comparable to global cities such as New York, London and Tokyo. So again, this points the conclusion that prices is likely to fall.

Sky Habitat is leading that descend from heaven now as prices plunge from $1,700psf to the current $1,400psf. I would expect it to fall closer to $1,000psf over time as that is the price level that is supported by valuation.

Next post, we talk about where prices should be and what is the alternative scenario. 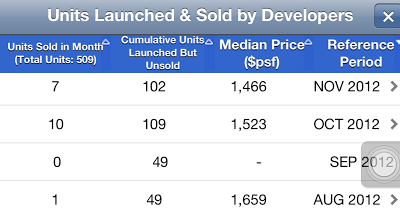