This is a continuation of the previous post on Bayer / Monsanto.


In the last post, we postulated that Bayer is a buying opportunity because it is the world's largest player in crops and seeds which is growing at mid single digit and its stable cash cow businesses in pharmaceutical and consumer drugs would provide huge free cash flow to investors. At its low, Bayer traded at EUR 68 billion market cap while generating FCF of EUR 7-8bn. Salivating right? 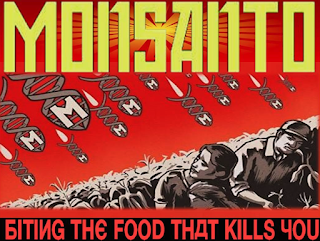 
As promised, today we discuss Bayer's risks. Bayer didn't crash and burn for no reason. It lost EUR 20bn in market cap when Monsanto's cancer causing weedkiller news broke but it had also lost another EUR 20bn before that as the market caught whiff of the bad news. To summarize here, Bayer has three key risks:

1. Monsanto could face litigations amounting to USD 5bn in costs and lose more revenue in the years ahead for one of its biggest seller - Roundup.

2. Bayer's drugs going off patent would mean that the pharma business could lose EUR 10 billion in annual sales if it doesn't come up with new replacement drugs.

3. Bayer and Monsanto's matrimony is deemed a marriage made in hell. Environmentalists, farmers and some regulators hated the deal and it would face scrutiny on many fronts.


The biggest risk on most investors' mind is Monsanto's cancer causing weedkiller called Roundup. While most of us in sunny Singapore would never have heard of Roundup, this is the revolutionary weedkiller created some 40 years ago that farmers use to increase crop yield by selectively and successfully killing weeds. However, it was recently deemed as carcinogenic because some farmers died after years of handling and using Roundup on their crops. While this is sad and there might be some truth, it is also too late to turn back the clock. The world has been using Roundup for 40 years! Without Roundup, we would never produce enough food to feed 7 billion mouths. The solution is not suing Monsanto but to create better weedkillers, which is ironically also up to Monsanto.


Financially, the negatively impact has also been factored into the share price. Bayer's market cap collapse c.$20bn since the news broke. Analysts had estimated that the maximum litigation cost is c.$4bn which means that lost revenue should translate to c.$16bn. I believe this is factoring in losing close to a decade worth of sales in related products which could be the worst case scenario. In short, a $20bn drop in market cap had essentially fully factored in the bad news with regard to Roundup.


The second risk pertains to Bayer's own pharma business. It has two blockbuster drugs that will go off-patent between 2023-2025. Bayer would lose close to 30-35% of its pharma EBITDA or 30-40% of overall EBITDA. While it has 6-7 drugs in the pipeline, none of them looked promising enough to offset the decline from the two key drugs. So this means that the pharma business should see its value collapse by a similar margin i.e. 30-40%. Well, given the additional EUR 20bn drop in market cap before Monsanto's debacle, one would argue it already has. (The pharma business has 6bn EBITDA and using 10x EV/EBITDA multiple, it is worth c.60bn which means that a 20bn drop is a 33% decline.)


In short, the bad news with its pharma business is also factored in. So any incremental positive from here should be just pure upside. This brings us to the last point - Bayer and Monsanto is a marriage made in hell and global regulators would not give their blessings. The new entity would face more hurdles, litigations and what not in the future. We cannot put a number to this. Is it another 20bn market cap decline or more? Who knows? 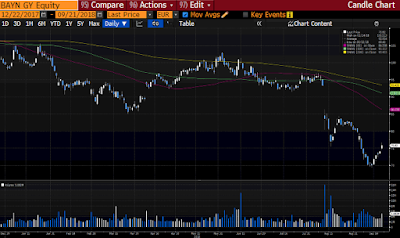 
Investment is never about eliminating all the risks. It is about measuring the risk reward. Can Bayer fall another $20bn in market cap, bringing the stock to EUR 48bn market cap meaning it trades at a 15% FCF yield and a 6% dividend yield? At EUR 48bn it is worth less than what it paid for Monsanto and close to what ChemChina paid for Syngenta. Another Chinese SOE would just buy this up to help secure China's future food supply.

Well, the probability of Bayer dropping a lot more is not zero, but it is not high. Meanwhile, is it more likely that the market recognizes its synergies with the merger, or the market recognizes the value in its businesses and hence bidding it up back to a more reasonable historical 4-5% FCF yield. Or Roundup's litigation costs and lost revenue see better quantification which is much less than 20bn? It is hard to say, it might take some time ie 2-3 years. This is real investing, no one knows. We measure the probabilities and bet accordingly.

The catalyst might come when the current Chairman and CEO Werner Baumann moves on which again might take 2-3 years. He was appointed two years ago and oversaw the Monsanto deal which wasn't well like. He also has a reputation of being too smart and hence not well-liked by some. So that also partly explained why it was an easy sell for investors. They don't feel good after meeting the man. So, we might need to see some changes.

Meanwhile, we are paid to wait with the almost 4% dividend (subjected to 20+% capital gains tax though). Bayer traded as high as EUR 130 just three years ago. If it gets close, we are talking about 70% upside!