Bayer was a EUR 100 billion market cap industrial conglomerate that has collapsed big time from a recent high of EUR 120 per share to EUR 73.5 today. There were two reasons. Firstly, the firm is being sued in the US for selling cancer causing fertilizers. Well, actually it's Monsanto, the world's largest GMO seed seller and pesticide and herbicide manufacturer that was selling bad products but hey, Bayer is going to buy Monsanto, so Bayer and its investors are on the hook! Next, Bayer announced disastrous results warning of lower full year sales and profit blaming higher integration cost with Monsanto.

The market sent the stock down 5% last week after it dropped 12% two weeks ago as a result of the Monsanto debacle. However, I believe this is where things are getting really interesting. Value investors like to fish in perfect storms. We are prepared to get wet while catching whales! Okay, let's first state the investment thesis - our reason for buying a stock which should be clear and concise:

Bayer will become the world's powerhouse in crops and seeds after acquiring Monsanto with close to 30% global share and together with its original stable portfolio of businesses in consumer and pharma drugs, it is poised to generate at least 10% free cashflow based on today's market cap.

The following chart shows the pro-forma breakdown of Bayer's revenue after absorbing Monsanto. 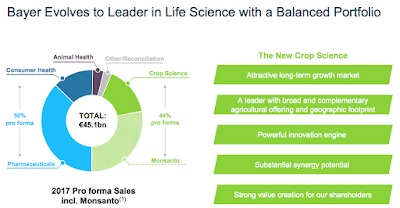 
To put it simply, Bayer's revenue split would be 50% crop and seeds, 40% pharma and 10% consumer. Essentially, we can see it as 50% Growth - coming from crops and seeds and 50% Stable Cashflow - coming from its pharma and consumer segments. All three businesses are traditionally great businesses with strong moats, which we shall discuss in greater detail in the following paragraphs.

The crops and seeds business is dominated by Monsanto. This firm is the global leader in seeds, weedkillers and crop products. It has very high global market share (40-80%) in various products including GMO (genetically modified organisms) soy bean and corn seeds. After its combination with Bayer, it would be the world's largest player in an oligopolistic market with a few other players - Du Pont, Dow Chemical, Syngenta, BASF and Agrium. But it will be the Big Brother calling the shots (actually Monsanto was already the biggest brother in the US). The agriculture industry is also in a secular growth trajectory as the global affluent population continues to increase and we need to keep up food production.

Nobody likes Big Brother. The environmentalists had been making noises about Monsanto's GMO products, labelling them as evil and causing illnesses but the truth is a lot of people would go hungry without GMO seeds. Alas, we cannot have our cake and eat it. It's gonna be GMO or no food. Your choice. What's even more interesting is that the bulk of the seeds goes into producing food to feed cows and pigs, not humans. So before labelling Monsanto evil, perhaps we should all stop eating meat first?

Regardless, Monsanto is in a huge growth industry, we need more pigs and cows to feed humans and we need faster food production. Monsanto believed that long term topline CAGR should be in the mid single digit range. With its merger, it would also be able to extract a billion Euros of synergies and it would continue to be a price and product leader, while extending its R&D prowess and distribution network to global farmers. Is it a wonder why farmers and scholars hated the deal? It was said this could be a marriage made in hell. So better hedge by owning them as minority investors right? 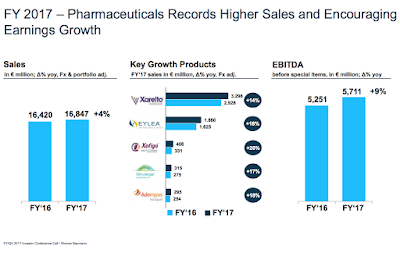 Okay, let's talk about old German Bayer. Bayer has two interesting businesses. It has a pharmaceutical arm that had produced 2-3 hit drugs with EUR 16bn in annual sales. The current largest contribution is Xarelto, a blood thinner which was very successful but its patent would expire in a couple of years. The second drug is Eylea which is used to cure certain eye conditions. Both drugs are blockbusters but investors are concerned that there might be nothing left in Bayer's pipeline which means that this business could be worth very little going into 2025. I am no pharma expert so let's assume that might be true. The key question is should this business be valued next-to-nothing? We will go through the math later.

The last business is Bayer's consumer over the counter drug business which has long standing branded drugs such as Aspirin and Claritin generating EUR 6bn in sales and 1 plus billion EBITDA annually. Bayer has tried to beef up this business with M&A but synergies were lacking. It most recently bought Merck's consumer business but with little results. This is partly another reason why investors didn't feel comfortable about another big merger with Monsanto. 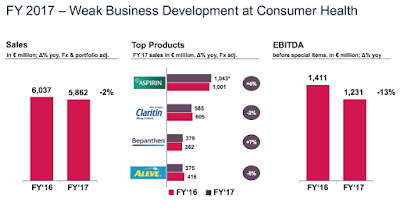 
Now putting everything together, we have two stable cash cows generating EUR 6bn in EBITDA and c.5bn of free cashflow (FCF). In the past five years, Bayer's standalone free cashflow was EUR 2.8bn, 3.2bn, 3.8bn, 5.8bn and 5.2bn. Monsanto's FCF adds another USD 2bn which brings overall FCF to EUR 7bn if not 8bn. Bayer today trades at EUR 68bn implying more than 10% FCF yield. Dividend yield is also closing in on 4% as a result of its stock price collapsing.

Recall that Bayer bought Monsanto for USD 62.5bn or EUR 53.6bn which means that market is valuing the rest of Bayer's original businesses to be less than EUR 10bn. So is it right to value two businesses generating 2.8-5.8bn FCF at 10bn? Or looking it the other way, the market is saying that Monsanto should be worth a lot less than USD 62.5bn. But this contradicts the fact that Monsanto traded at USD 50bn market cap for years before Bayer bought it. Either way, Bayer definitely doesn't look expensive.

While there are reasons why the market thinks so negatively about Bayer and Monsanto, I believe this is an over-reaction hence a golden buying opportunity. The risk reward is very skewed here. Bayer and Monsanto's free cash flow of EUR 7-8bn is very stable and more likely to grow with the promised synergies than to collapse. Hence as a Bayer buyer today, we stand to earn a c.4% dividend and the reward that it would pop 50% far outweighs the risk that it would fall 50%.