I have been a long term shareholder as well as a long term mobile phone subscriber of Singtel. The experience had not been great, to say the least, especially in the past three years. Singtel's stock had done okay if we look back in time. It was $2.2 or so in 2007 and today it's $3.7. An investor who held throughout would had made 68% on capital gain and another 40% or so in dividends. But in the last three years, it did nothing. Meanwhile, DBS went from $15 to $25 and became the largest stock in Singapore (overtaking Singtel) for the first time ever!

Today, we try to decipher what happened to the #1 stock in Singapore.

Singtel's investment thesis had been pretty simple. This was a business connecting 600 million mobile subscribers over a huge part of the world. It generated tremendously strong free cash flow averaging S$3bn annually over the past 10 years with almost 2/3 coming from overseas. It is the #1 or #2 player in Thailand, Australia, Indonesia and Philippines. In Singapore, being the biggest brother, it led the way in screwing subscribers and generated huge profits year in year out. What more could investors ask for? 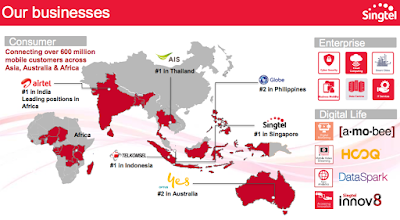 
For the longest time, it was also the proxy for Singapore. Equity investors looking to buy into countries usually look for proxy stocks. If they believe that a certain country had growth prospect and would like to play on that theme, they would buy a stock to express that view. So Singtel is the proxy for Singapore, just as Astra would be the proxy for Indonesia and Samsung for Korea or TSMC for Taiwan. However, there are also bigger themes at play. Just as Samsung and TSMC are now being associated as core stocks for the new tech wave, Singtel is facing heaps of trouble.

It is becoming a dumb pipe.

The dumb pipe argument on telcos has been around for some time. The theory was that as internet advanced, telcos would lose their relevance in the new paradigm as apps, transactions, gaming take place outside the telcos' dominance. It started with Whatsapp killing off SMS, then voice and now perhaps even data. In order to defend profits, the telcos keep setting up traps to squeeze money out of consumers.

As an example, international data roaming and international phone calls had become exorbitant. Data roaming is easily $25 per MB. If you are reading this on your mobile phone in Afghanistan without an overseas roaming plan, you might be paying $125! It has gotten so ridiculous that we hear about $1,000 phone bills and it goes on Straits Times and Singtel had to come out with some backdating-the-charges-via-a-cheaper-plan way to lower the charges. Meanwhile their call centres get flooded with waiver requests and they have the guts to claim that they are helping customers save money!

So is it just a dumb pipe or a dumber pipe?


But back to the original threat from apps and internet - this is real. SMS revenue fell drastically since Whatsapp came about. Now that voice quality had improve, people are using Whatsapp for calls too. So the only profitable arena left became data, which is why we see exorbitant data roaming charges. Now Google saw this chance and recently decided to jump in with a way to screw the telcos. It is rumored that they might offer phones with flat fees for global data usage. Now this is a gamechanger. It this really happens, it would be goodbye to all telcos, all over the world.

That's what telcos get for screwing subscribers all these years. Remember Google's company motto is "don't be evil". Not that they are living up to it, but they are certainly aiming to eat Singtel or for that matter every telco's lunch.

Singtel knows this is coming. While screwing subscribers they have also been investing in new ventures. Alas, no traditional telco had succeeded in spending money to grow new businesses. Singtel touted its small success in cybersecurity. It claims that it is the #5 player in the world in the field of cybersecurity. But if we speak to the real cybersecurity guys, they would be like, "Huh? Who is Singtel? So, it's a stretch to say they are good here. But who knows, they might make it, cybersecurity is a nascent market, things can change quickly.

Unfortunately, these investments need money and with money going into investments means less money for shareholders. The lines above shows that while dividend per share had been kept constant at 74% of earnings per share, it had shot through the roof as a % of free cash flow. At this rate, Singtel would be borrowing to pay dividends. Perhaps that is why it has been overtaken by DBS in terms of market cap.

Having said that, Singtel is not going to crash 40% tomorrow. At S$3bn FCF per year, it is trading at a healthy 5% FCF and the market might still give it the benefit of the doubt. It can still become a smart pipe. Meanwhile, it will continue to screw subscribers and squeeze more cash out of everyone of us. Singaporeans pay one of the highest phone bills globally while suffering from poor network quality and exorbitant overseas roaming charges. Not unlike our public transport and our education system, we get the crap underneath the cleanliness and the efficiencies that our infrastructure promises. Geez, that's quite worrisome, isn't it.

It is a dilemma to be a suffering consumer but a shareholder of Singtel. As a shareholder, some of the pain is mitigated with the dividend and the capital gain over the years. But as we now know, Singtel could become a dumber pipe. With the 4th telco coming up, it might really stir up competition and grab a piece of Singtel's pie. Especially with most subscribers suffering so long and would be more than happy to switch. If the Singapore cash cow is slaughtered, we can easily see cashflow plummeting 20-30%. This is then a serious threat to the dividend and when the dividend is cut for a dividend stock, things get really, really ugly.

Perhaps its time to seriously think about divesting Singtel!