This argument came about in late Nov when some prominent economists noted that the US yield curve is flattening and might invert soon. Flattening or inverting yield curves are big deals bcos they were followed by recessions 7 out of 8 times since WWII. The chart below shows just that. 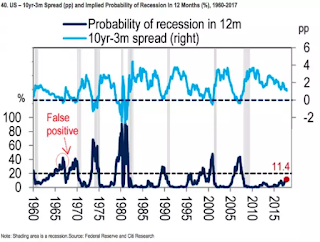 As you can see, we are likely to head into another one as the 10yr-3m spread goes to zero, which implies flattening or inverting yield curve.

The economic rationale is weak though. Why does a flattening yield curve causes recession? One reasoning postulates that banks, the lubricants of a vibrant economy require steepening yield curve to make their spreads, so if spreads turn to zero, it would mean they cannot lend money and hence economic activities grind to a halt.

Another reasoning goes like this: short term rates rising to meet long term rates usually means central banks are entering into tightening mode, which again put the brakes on the economy, causing recessions.

However, it seems that this is not going to happen at least until late 2018, so meanwhile the party goes on! Huat Ah!