The world was never meant to stop functioning for months on end. But this is the reality now with COVID-19 disrupting normal lives for most of humanity. For one, international air travel has grind to a halt. Singaporeans used to taking flights at least once every couple of months will find this new normal uneasy. Cinemas have stopped operating as we cannot practice social distancing sitting together in front of the big screen. Again, in entertainment deprived Singapore, we cannot wait for them to reopen. But who knows when that can happen.

Restaurants, bars, night clubs, live concerts and many other businesses which inherently cannot adhere to social distancing rules will find it difficult to operate as COVID-19 rages on. Many of these businesses may not survive. With businesses closing, we are talking about job losses. The US has seen over 20 million jobs lost. This is becoming a crisis that is be bigger than the GFC. In Singapore, we are lucky to still have our jobs.

Yet for most of us working from home, we have other worries. Family time is now on overdrive and we are restraining ourselves from committing domestic violence. Si Gin Na* Stop watching Youtube and do your homework! This is mental resilience training, so much so that we miss the office. There is no need for physical resilience, we practically just eat and sleep. So our bodies are transforming from the pic on the left below to the one on the right. 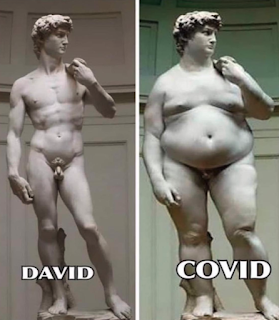 
Actually, it's not a laughing matter. With economies collapsing, livelihoods are at stake. Nobody knows how long this will last. It could be many more months. We have to be mentally prepared. In a blue sky scenario, the number of infections continue to decline (as it has started to do so over the last two weeks), summer comes and we can reopen the economies. But this is now becoming less and less probable. Even if the virus goes away, we are faced with harsh realities with huge number of bankruptcies and millions of jobless people.

We may find ourselves in a very different world after COVID-19 subsides.

A central scenario could be a slow, gradual semi-reopening of the economies in summer, hopefully the virus does not come back in fall and winter. The vaccines and cures are successful and we see a gradual normalization thereafter. International air travel may come back 2021 and summer Olympics in Tokyo next year could mark the turning point. We may have to accept the new reality - we live with WFH, HBL, social distancing and lockdowns for the rest of the year.

In a worst case scenario, COVID-19 hits us waves after waves. We see a Spanish flu situation. The number of infections goes beyond tens of millions and deaths spike. Efforts in finding vaccines and cures fail and we only defeat the virus after achieving herd immunity. This means months and months of lockdowns, failed reopenings and more lockdowns. Normalization might take years and we look back from the future recognizing today as one of the darkest period of modern society.

Last week, crude oil sort of gave a premonition of this armageddon. A barrel of crude which cost $20-160 over the last 80 years and average $40-60 over the last 10 years fell below zero. In fact, it went to -$40. This meant sellers paid buyers almost $40 to sell them a barrel of oil. Imagine, I make a bowl of bak chor mee and sells it to you for -$4. So you get $4 and get to eat the bak chor mee. Things went absolutely crazy. 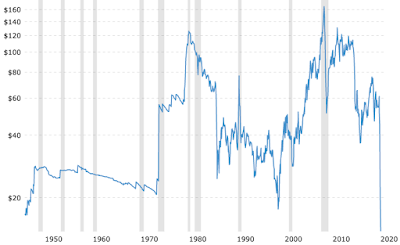 Why did this happen?


We do not have the full picture yet but as the days go by, more and more pieces of the puzzle are coming together. First, while the world stopped functioning, oil producers did not react fast enough to stop oil production. The drastic drop in air, land and sea travel caused demand for fuel to collapse. As such, the oil that is pumped out is not used and needed to be stored. But global storage facilities was never built to store months and months of oil.

In the US, the main capacity to store crude oil in Cushing, Oklahoma was on the verge of running out. It was speculated that some novice market participants holding the expiring May contract of crude find themselves stuck because if they cannot find storage, they would need to take physical delivery and that was not an option. So in the last minutes of frenzy trading, crude fell below zero for the first time in history.

This is a reminder that the finance world and markets are actually very complex. Don't anyhow play pay!

But things did not look good afterwards. Now the benchmark has rolled over to the June contract but prices did not recover. It traded at $1 the day after and both WTI and Brent are only at teens a week later. Still 40-50% below what was quoted just weeks ago. The same situation will come in a few weeks and traders might find themselves out of storage, this time not just in the US but globally! So we may see prices going negative again.

In a sense, we are witnessing a historic moment, how a virus - COVID-19 takes on the world's most traded commodity - crude oil and decimates its whole eco-system built over the last 80 years. We saw one US producer Whiting Petroleum going bankrupt and our own oil trader Hin Leong in huge trouble even before crude prices going negative. There will be more casualties along the way. Even Keppel Corp and Sembmarine could face their own issues. The saving grace for Keppel is that its property and telco / data businesses could help offset the weakness in its energy segment somewhat. But I would not be surprised if the stock retests its 2008 low of $3.41. 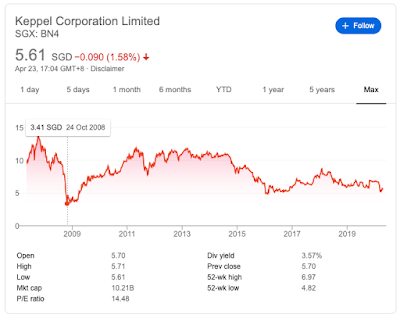 
The other revelation last week's saga taught me was that commodities prices have no floor. I used to believe that a barrel of oil should have some kind of intrinsic value. People use it to power their cars, make plastic, produce electricity. So it should be worth something. When we look at the long term chart for oil, we could make an assumption that maybe a barrel of oil should be worth at least $20 and as oil get scarcer, perhaps it is worth more, maybe $40. Indeed, as mentioned, oil traded at $40-60 for the last 10 years.

In the last few days, this thesis is turned on its head. If oil has some intrinsic value, how can price go negative? As such, I come to the realization that a commodity may not have intrinsic value. Crude oil is a commodity. A barrel of oil today is the same as that 30 years ago. It is also the same in US or in the Middle East. As such, there is no floor because when it is not needed, people will sell it at any price. Even negative prices. This is the same for copper, wheat and all other types of commodities. The exception might be gold. So between oil and gold, maybe gold might be the right commodity for the same thesis.

In retrospect, perhaps crude price bouncing up and down all these years was all just speculation on supply and demand.

The same story actually played out in the different bits of the shipping industry. As astute investors would know, shipping is a commodity business. It does not make too much of a difference if you used NOL or Maersk or Evergreen to ship a container around world. So when there is a huge oversupply of ships, the shippers might pay customers and help ship stuff for them. The vivid example I saw in my investment experience was in the bulk shipping industry.

When China was booming, there weren't enough large Capesize bulk ships and steel mills around the world paid exorbitant shipping costs to ship iron ore and coal to their mills in China and other parts of the world. Alas, good times came to an end and Capesize daily shipping rates fell below operating costs. So logically, the ships should just stop operating, since every single day in operation meant they bleed money, tens of thousands of dollars. But they have to do it for various reasons, the banks would cut the loans if they stop operations and docking these ships incurred cost as well. So it was a nightmare. They ship and bleed every single day. In fact, they are still in the nightmare today.

So I guess the lesson learnt is to be very mindful when buying commodities and commodity businesses. In times like this we appreciate the boring businesses like Nestle and F&N that see relatively smaller impact and smaller volatility in share prices. While we are dealing with COVID and Si Gin Na in the house, at least we get to sleep better at night.