This post was first published in 25 Mar 2020 but things moved rapidly and my views have changed. The updated parts are in red.

Since we last discussed COVID-19, the world has gone from bad to worse. We now have a global pandemic which is increasingly out of control. It is becoming a crisis in the same order of magnitude as the 2008-2009 Global Financial Crisis. I have been using the original thebaselab website of daily checks. It is depressing. We have exceeded 15,000 100,000 deaths with no end in sight. 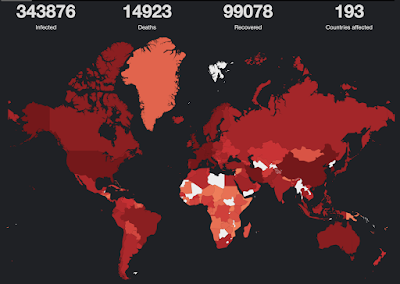 
To combat the virus, many affected countries have gone into lockdown mode following China's example. But they didn't do it fast enough. Some countries' healthcare systems could not handle the situation and many lives were lost. It is important not to stress the healthcare system because there are only so many ICU beds and only so many respirators. Unfortunately, we don't learn fast enough. The first lesson from Wuhan was not learnt quickly enough to prevent the tragedies in Italy, Span and Iran and New York. Hopefully other countries and cities can still save themselves by working hard now.

Meanwhile, global markets went berserk. It did not help that Opec and Russia decided to shoot themselves by not reaching an agreement on production thereby causing a huge collapse in oil prices. (They finally agreed but the damage was done) The direct link between COVID-19 and crude is not clear. There is reduced demand but it's not 40%. However oil prices fell from the 50s to the 20s. In stressful times, as we had seen during the Great Financial Crisis (GFC), market participants adopt the mentality of "sell first, talk later". Hence the correlation of different asset classes goes to 1. Everything gets sold. Even gold got sold.

So last week (19 Mar) gave us a glimpse of the confusion that took place. As markets collapsed, we saw indiscriminate selling across stocks, bonds and commodities. The USD spiked because investors sold assets in other currencies and revert their holdings to USD cash. But the US Treasuries also got sold off, because that's another way to raise cash for redemption as well. This selling will continue. In Singapore, we have seen many blue chips hitting multi-year lows. As long as the global situation remains dire and fluid, we should not expect any recovery. (Then the market saw one of its sharpest rebound in history)

Why is everything going to hell in the markets?

While some of us in Singapore probably don't feel this way, this crisis could actually be worse than the GFC. The 350,000 1.7m infections had affected hundreds of millions of families directly. They are seeing their loved ones succumbing to the virus. But as the lockdown continues, the livelihoods of billions are are now badly impacted. We are talking about millions of people being laid off. They could be in the service industries, their employers only have days of cash left before going bankrupt. They could be the small suppliers in the airline/aerospace industry and/or the oil and gas industry. The big boys in these sectors are having issues, so what are the chances that the little ones can make it?

The situation is really, really bad. People cannot pay their bills, their electricity is being cut off. They cannot pay rent, and face eviction. They have no money to buy food. It is literally life and death, even when the virus is not nearby. Some experts have drawn parallels to war. We are at war with the virus. Hence we need the monetary bazooka to come and save the day. 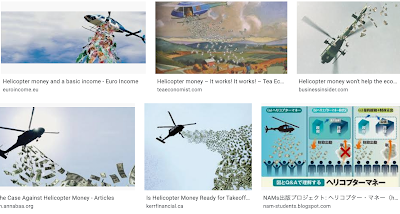 Alas, politics get in the way. The politicians cannot agree how this could be done. Can we bailout the corporates with no strings attached? What if these big oils and big aerospace just use the money to prop up share price instead of saving their suppliers? What about helicopter money? This is an interesting notion Milton Friedman coined in 1969 but made really famous by the previous Fed Governor Ben Bernanke. He famously said he would get on the helicopter and throw money on Main Street in order to stop the rout during the GFC. We are now doing it because families really need that $1,000 to tide over this month. Not next month, this month.

So the politicians need to sort this out. They probably have days. Lives are at stake. (30 Mar update: they got their act together) The saving grace is that they managed it during the GFC, so it can be done. Then we need the virus situation to subside. China managed to contain it. So did South Korea. We need the major affected economies now (US, UK, Italy and Spain) to follow the playbook. Lockdown for a few weeks, things should get better. The situation will be different for many developing countries. Hopefully their leaders are learning fast. If they don't, their healthcare systems will not be able to cope. We will see a lot more deaths. May the Force be with them.

Finally, we come back to the big question, what do we do now? Buy, sell, wait?

Like I have said many times before, it is not possible to predict what happens next. The politicians could get their act together tonight and we are done with the bloodshed. Then we curse and swear that we didn't buy enough. My base case is the selldown continues and things get really cheap. It could be close to or even below GFC levels for some stocks. Then it will be the best time to buy. But we cannot tell in advance. So we buy incrementally. I plan to buy 1/5 of what I intend to deploy fully every week or two, something like that. It is not hard math or science, so you need to figure out what works for you.

Markets have since rebounded sharply but it might be consensus that this is a bear market rally. It is quite unthinkable we will recover and exceed the previous 2019 high any time soon. The upside is capped and given the bounce, the time to buy is not now (10 Apr 2020). If there are things that could be sold to raise cash, maybe we should raise some cash to have some more dry powder. The next selldown will test the 2020 lows.

The worst case is that the COVID-19 pandemic drags on for months and we did not move fast enough. One, two or three large corporates fail and drag down some banks. 100 million or even more jobs are lost globally. Or, we see continuing rise in infections and many more outbreaks. We see waves and waves because different countries are on different curves. Some successfully flatten their curves but not others.

In Singapore, we see a full blown community spread. The fourth wave gets us. Our healthcare system gets stressed. Then we will fall below GFC levels. It is a doomsday scenario. Maybe we won't be worrying about our portfolios at that point. We must not let this happen. Stay at home. Keep the social distance. Flatten the curve!

In short, there are many scenarios. No one knows which one will pan out. I would wait now but would look out for stocks that becomes too cheap to ignore. For example, DBS at 0.5x book with more than 10% dividend yield looks good (albeit banks may not be able to pay dividend in 2020 given the situation). Sadly, I have bought it way too early at $21. Now the stock is trading at $18. Dairy Farm breaking its all-time low at $3.30 or Ho Bee revisiting $0.90 will be interesting. Genting does look cheap at $0.50 (it has since rebounded to $0.70) but we have to assume its businesses will recover strongly once the virus is defeated. We have discussed these stocks before so click on the links for related posts if interested.

Meanwhile, hang in there. This is a marathon. WFH is here to stay. Don't scold the kids. Avoid the spouse. Flatten the belly curve on top of the other curve.