Okay, in the last post, we discussed the basic stuff about Vicom. It is hugely cash generative and we are getting it at low teens PE, 13x to 16x PE for a 30% operating margin, 20% ROE business. This is really not expensive, albeit the growth angle could be questionable. Singapore is a mature economy, our vehicle population is maxed out, we don't have enough roads for more cars. So how to grow?

Maybe Vicom is cheap because there is no growth. Or is there really no growth?

This is where it gets interesting. In stock investing parlance, we call it optionality. Optionality refers to potential upside that is there but we do not know if they would materialize. Usually, if they do, it means a lot more upside but if they don't there is also not much downside. It is said that the best investment portfolio is simply a portfolio of free optionalities.

To delve further, this optionality concept comes from the big branch topic in finance simply called options which were created as early as 600BC by Greek mathematicians but only well understood when two Professors put on their thinking hats and solved the puzzle in the 1960s. Their theory won the Nobel Prize and today, all finance students have to study what they created - Black Scholes Option Pricing Theory. Rings a bell? 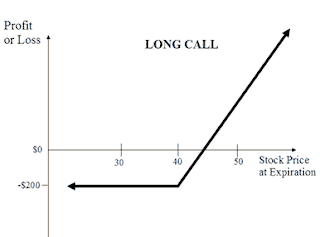 
The simplest option chart (above) shows how the downside is capped if the stock does not move or in the unfortunate event, even if it goes down a lot, the option buyer only loses his premium (capped at $200 in the chart above) and face no further downside loss. But in the event that the stock price goes up, the option buyer stands to benefit from all the upside. The catch is that options expire and the deal is off once the option hits expiration date.

In a more general context, optionality refers the similar asymmetry in risk and reward but with no expiration date. The catch is that most optionality do not really materialize which is why it is not worth much in the first place and the market refuses to pay for it. The sector with the most optionality examples would be the pharmaceutical sector. Pharma companies are always researching on new drugs and nobody knows which ones would be the next blockbuster drug. The example that comes to mind would be Pfizer and Viagra.

Back in 1996, Pfizer was just another pharma stock trading at $5. It was not small though (market cap at that time was already USD 40bn!). It generated a billion plus dollars of free cashflow with its huge portfolio of drugs. But in the same year, it filed the first oral drug for erectile dysfunction (ED) - Viagra. Nobody knew how big the market would be. There wasn't such a market in the first place. Men with ED just lived with it, unless it's super serious then they go drink Tongkat Ali or eat oysters or something. There wasn't any medical treatment for ED. If the drug failed, then Pfizer would just continue to make its billion dollar annually with its huge portfolio of legacy drugs and the stock would be $5. As it turned out, Viagra became the biggest hit ever, allowing old men to have sex again and the stock went 5x to $25. At its peak, Viagra sold roughly $3 billion annually. 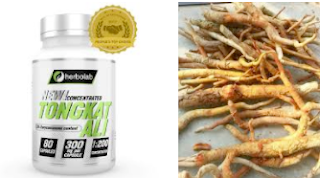 
So that's optionality. Pfizer was (and still is) a blue chip (now with the blue pill :), if one had bought it then at $5, one could enjoy the blue chip growth (maybe just single digit) and collect a stable dividend (2-3% dividend yield). If Viagra didn't happen, then it's decent growth, or rather, just blue chip growth and dividend. But when Viagra happened, then we are off to the moon. In fact the stock raced very early on as the market simply got excited even before the drug was launched. It more than doubled from 1996 to 1997 despite cashflow being weak in 1997 at only $600m (normally it should be above a billion dollars. Today Pfizer is a $200 billion market cap company.

Let's move back to Vicom. So what's the optionality? I see a few:

The first optionality is just about the timing of price increase. At some point, prices go up like everything else in Singapore. We just don't know if it is 2 years or 5 years. The history shows that the industry had a habit of raising the inspection fee every few years. It was $50 in 1997, then it was raised to $54 in 2001, then $56 in 2005 and then $58 in 2006. Based on its website, current fees are $62 inclusive of GST. This relentless price increase would simply continue bcos first it is nothing compared to the price of the vehicle (more than S$100k in Singapore today for a 1.6L car) and the other costs such as fuel, maintenance and what not. Every price increase again drop directly to its bottomline since there is very little cost in between. So even with the population of vehicle stagnates, Vicom can enjoy revenue growth. This is the beauty. Guaranteed revenue growth. Of course, the cherry on the cake is that Singapore's vehicle population will only go up. We need more buses, trucks, taxis every year. Passenger cars will also just keep growing bcos it is an aspiration to own an expensive car in this warped bubble on a little red dot. The market doesn't see this now, but when it does, that's when our option gets exercised!

Overseas growth is a new angle that is not being talked about right now. But the potential is huge. Singapore, for good reasons, is seen as a leader in standards by our neighbours and a few of them are very happy to bring Singapore companies into their country so as to learn from us. Vicom talks about opportunities in Vietnam. In the same vein, countries like Myanmar, Laos, Cambodia would one day require inspection and testing. Imagine if Vicom could just get 1 or 2 of these markets, or rather just a small slice of one of these markets, the potential is a huge increase in revenue. Vietnam alone has 100m people. Of course, this scenario is still pretty remote. There is nothing concrete yet.

The last optionality is similarly remote though not zero probability. ComfortDelgro (CD) today owns 67% of Vicom and it is not inconceivable for them to buyout Vicom given that it's such a lucrative business. Why give away that 33% to others? Of course they also want to buy back at a good price which is why nothing has been done all these years after the stock ran from 50c to $5. So the other way to look at this is that if Vicom falls too much, Big Brother CD will just buy it out. Hence there is an inherent floor price to this stock. Our downside is capped much like a call option. 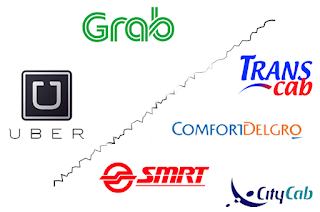 In a red dot not so far away... car wars

But given that Vicom is now a $500m company. CD needs to raise $150m to buy the 33% it doesn't own. With its woes, thanks to Uber and Grab, it would rather put money into this car sharing war to defend itself than to buy back Vicom. (CD only made $100m in free cash flow last year. So it's not a small sum for them, although one could argue that effectively they only need to raise $50m since Vicom has $100m on its balance sheet!) In any case, it might just be status quo for now. Some day they might buy Vicom, but not today.

To sum it up, Vicom has all these optionalities, but it is hard to put them into numbers. So we are paying c.$400m (after accounting for the $100m on its own balance sheet) for a steady $30m free cash flow. This translates to 7.5% free cash flow yield or 13x PE after adjusting for cash. The rest of the options, if it happens, comes free. With bank account interest rate at 1%, property rental yield at 2%, I would say 7.5% yield is pretty decent. In fact, 4% (or more in the future) would come back annually as dividends since they don't know how to deploy the huge amount cash coming annually.

That's basically why Vicom is a buy! Read from the first post.

Email ThisBlogThis!Share to TwitterShare to FacebookShare to Pinterest
Labels: Vicom