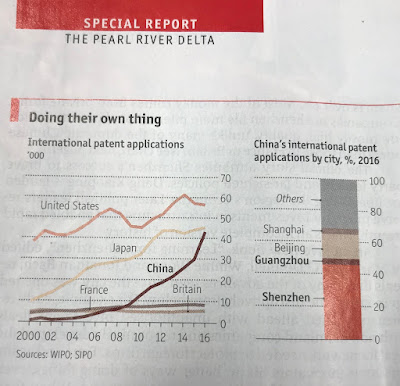 Here's an interesting report from the Economist a few months back. It described how the Pearl River Delta of China is now an innovation hub and a region of the future. The left chart shows that number of international patent applications. The data ends in 2016 but I suspect that China had already surpassed the US in 2017. China is now world's largest patent market today.

The right bar shows that the bulk of the patent filing comes from Shenzhen, arguably already surpassing the Silicon Valley. The city that Deng Xiaoping first visited on his Southern Tour and declared that China will rise, starting from the Pearl River Delta. Indeed, we have seen that transformation especially with the internet big names like Tencent and Huawei.

Here's a list of the most innovative and interesting Shenzhen based companies other that the two mentioned above:

In 2013, we discussed that China had a huge conundrum because it lacked certain decencies, corruption, deceit and counterfeit ruled the day. But it seemed that things are changing. The anti-corruption campaigned started by Xi Jin Ping since those days had continued and might really be working. Deceit increasingly doesn't pay as society matures and businesses look for recurring customers and building trust brings more money that cheating. The shared economy and e-commerce require trust as a bedrock principle to work, which is why China internet companies need to establish that asap. And lastly with innovation, China is beating counterfeit left-right-centre.

Hence, the 21st Century truly belongs to China. It might still take some time to get to where US and Japan societies are in various aspects but it may not be 50 years as described in the conundrum post. That's the thing about prediction! Nobody ever gets it right!