Treasury bills or T bills are short term bonds issued by the government for periods of less than 1 year. For the longest time, they only yield basis points due to global quantitative easing (QE) which has drove global interest rates to zero. But in recent weeks, yield on Singapore’s T bills has shot up with the Federal Reserve raising interest rates and our T bills now yield close to 3%!

In financial textbooks, we always talked about the risk free rate. This usually referred to the country's ten year bond yield which was usually at 3-4% in the good old days and this was the basis of all investments because risky assets cannot yield less than the risk free rate. During the great QE over the last 12-13 years, risk free rate went to zero and hence anything yielding 1-2% becomes interesting. This was especially so when disruptive companies promised to grow to the moon, increase their revenue 100x and vowed to change the world. Speculators rushed in where value investors feared to tread.

Now that risk free rate is back to the textbook level of 3%, there is a lot more downside for such stocks with minuscule earnings trading at 50x PER (this translates to earnings yield of 2% which is lower than the risk free rate now and hence makes no sense for value investors). So, if you want to buy Tesla's stock at current 100x PER, maybe you should buy Singapore T bills instead.

The only way it is justifiable to buy Tesla based on the risk free yield vs Tesla's earnings yield comparison is that Tesla grows its earnings more than 10x from here which means that the future PER is closer to 10x (ie earnings yield of 10%). Even so, current share price has already factored in this scenario, so Tesla has to do more than that for its market cap to go to USD2trn (another 110% upside from its current USD900bn market cap). This is not to say that it cannot be done, just very difficult. Having said that, this valuation math also didn't work when Tesla was USD100bn going to USD1trn in market cap. So speculators in Tesla did make a lot of money so far!

T bills is a good way to park any excess cash that you have because it comes back soon, in 6 to 12 months. In Singapore, you can only buy through the three banks: DBS, OCBC and UOB and no relationship manager will recommend this because they earn nothing. The process is also deliberately cumbersome to discourage buying but you just have to push on. You will be asked to choose either competitive or non-competitive bids and a huge warning would pop up to say that if you choose non-competitive, you might lose money - which could be true with negative interest rates, but not today. 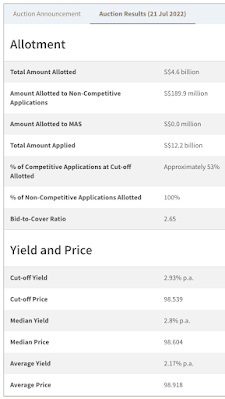 Looking at this 6 month T bill at almost 3%pa, some of you might have figured this out - the Singapore yield curve is inverted with 6 month T bill and also the two year bond at higher yields vs the 10 year Singapore bond at 2.7% as of this writing. While the academic theory is not clear, inverted yield curve usually means that a recession is coming. This means that things can get ugly, you may not have income or you need to help someone close who needs money, so you do not know when you need cash. As such, don’t put everything into this one basket. Well, recession aside, inflation is looming and money in the bank is losing value. So if we can claw back 3%, we should seize the day! The next T bill auction closes 4 Aug. See you at the ATM!

Email ThisBlogThis!Share to TwitterShare to FacebookShare to Pinterest
Labels: Bonds