I finally finished this seminal book after reading for almost three years. It was simply too dry and too painful so I used it mostly as a sleep catalyst: i.e. I read it when I cannot sleep. Usually, I don't get pass a couple of pages which was why it took three years. 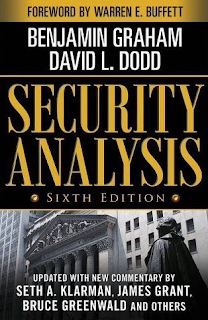 To be honest the book was marginally helpful. It was written so many years ago that a lot of the case studies are now unrelatable and the whole section on fixed income was simply too technical. I can understand why Benjamin Graham wrote The Intelligent investor. So that his philosophy can be more easily understood by to the layperson. It was definitely a better read.

That said, the book was seminal because it introduced all the original value investing concepts. It described the original thinking about stocks, it popularized valuation methodologies, how we should look at financial records for at least 7-10 years and how we should think about management of companies.

The biggest revelation was that most of the lessons learnt about financial shenanigans that were applicable then were applicable now. Human nature doesn't change and that is always at the crux of investing. In the end, investing is the ultimate battle of wits against a million other chess players. Here's a quote by Seth Klarman that just rings truth all over:

The real secret to investing is that there is no secret to investing. Every important aspect of value investing has been made available to the public many times over, beginning in 1934 with the first edition of Security Analysis. That so many people fail to follow this timeless and almost foolproof approach enables those who adopt it to remain successful. The foibles of human nature that result in the mass pursuit of instant wealth and effortless gain seem certain to be with us forever. So long as people succumb to this aspect of their natures, value investing will remain, as it has been for 75 years, a sound and low risk approach to successful long-term investing.

Next up, we look at some of the original valuation methodologies and financial shenanigans!