Gamestop is a game retailer in secular decline which was made worse by the pandemic. Well, it's in decline simply because we buy consoles from Amazon and games itself are now downloaded online so there is no reason to visit Gamestop ever again. But in recent days, Gamestop found itself becoming the epicentre of an epic war. Its stock price rose 1700% as the internet generation wanted to make a statement to Wall Street. 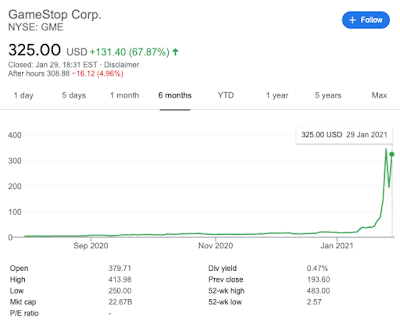 The statement was made on Reddit. War rallies on social media to save Gamestop from evil Wall Street hedge funds shorting the stock to bankruptcy. Gondor calls for aid. And Rohan will answer. Yes, they were answered. Millions of gamers and internet trolls bought Gamestop and drove the share price up so that short sellers will get hurt. They won the first battle, some hedge funds sold and a few even went bankrupt. 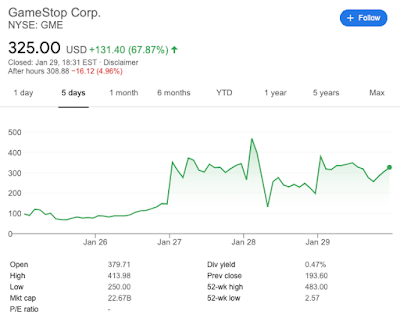 Gamestop on a rollercoaster

Two days ago, on 28 January 2021, Wall Street fought back. Various trading accounts, using share price manipulation as the reason, restricted trading on the name, driving the share price down from $469 to $132, an over 70% drop. The saga did not end, millions of Robinhood account holders complained and the restrictions were lifted. The stock proceeded to rise over 100%! So the fight continues. This is yet another manifestation that we are in this pandemic induced bubble. Irrationality overwhelms and share price volatility explodes. 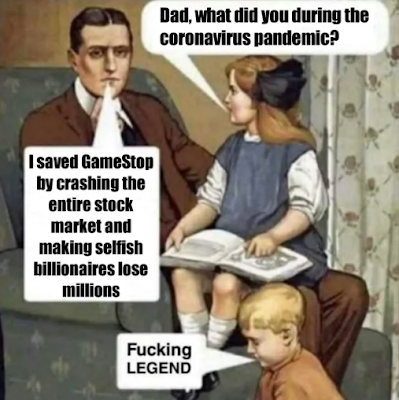 We know this is not going to end well. Gamestop will not be saved (for the simple reason that Gamestop doesn't have an intrinsic value of USD22 billion) and many people will lose their shirts.