Why Do Companies IPO?

This post came from a request from Gerard who recently joined our chatgroup. I thought it was quite an interesting question and a Google search didn't really address the core of it so I thought I could a better job! Hehe! Btw, if you are interesting to join the chatgroup, do whatsapp to +65 8119 6429! Please take a moment to read about the rules also thanks!

For the un-initiated, IPO stands for initial public offering which is the first time a company sells its share to the public so that anyone who has a brokerage account and money can buy the company. In an IPO, the existing owners of the company either sell their shares or they raise new shares diluting their current ownership or both so that there are enough stocks in the market that could be traded. It is usually an important milestone for a company to IPO. It is like a musician cutting an album with a big music label or like an athlete going pro. Something like that. 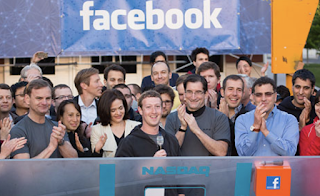 Facebook's CEO ringing the bell on its 1st trading day

Okay, so why do companies IPO? I believe here are the main reasons, do note that they are by no means exhaustive.

1. To raise money for further expansion.
2. To create public awareness.
3. To ensure better corporate governance.
4. As a directive from higher authorities.
5. To reward early shareholders (usually also employees) by providing an outlet for them to sell.

True value investors usually do not participate in IPOs i.e. they don't subscribe to buying the shares bcos it represents quite a complete opposite of the value philosophy and is another example of the Greater Fool Game. Here's three reasons explaining the details:


1. IPOs create a lot of hype without fundamentals, value investing requires years of data and good analysis to figure out the intrinsic value of the company. There is simply not enough information in the IPO for that kind of analysis.

2. There is information discrepancy during the IPO. The sellers know much more than the buyers and some sellers take advantage to sell lemons to gullible buyers. In value investing parlance, the buyers have no moat vis-a-vis the sellers.

3. In an IPO, buyers are pitched against one another and the brokers and sellers work together to create a bidding situation to their advantage. Prices then move up to the detriment of buyers not unlike auctions where only the highest bidders win. Value investors do not like this.

Having said that, it is statistically possible to make money from IPO in the first few weeks because most sellers want the IPOs to be successful and would price it slightly cheaply. In most cases, there is enough hype and euphoria to make things look good, at least for few weeks. Institutional investors, high net worth individuals and retail investors clamour to get allocation, creating demand to buy and flip these shares. The chart below shows the IPO returns for US in 2017 (likely to be over 3-9 months although it's not stated clearly). 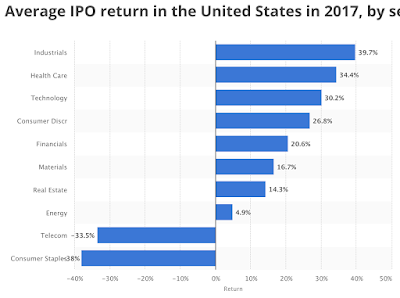 From the chart, we can tell that average return is positive with the range being -38% to 40% across all sectors. It also shows the signs of the times with consumer staples, one of the best compounders over time, actually underperforming the rest of the sectors. The rage today is all about internet and automation and robots, hence we see them high up there on the chart. However do note that the data could be skewed by just one or two data points. A stellar IPO going up 400% would completely boost a single sector.

Alas in sunny Singapore, it might not be easy to make money via IPOs. This is because a lot of IPOs are for owners to cash out and hence the stocks falter after IPO, sometimes never returning to IPO price. The classic example being Hutchinson Port Trust, sold by Lee Ka Shing in 2012. The share price since IPO is shown below. An investor during IPO would have lost almost everything. The 6% dividend would not have been able to make up for much. 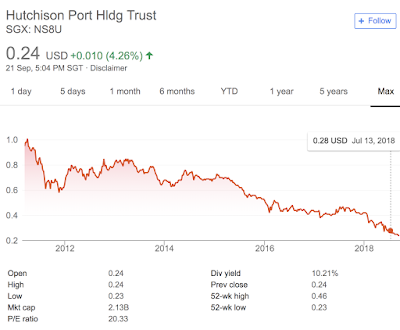 
Over time though (usually 3-5 years), the fundamentals of the company would show after the hype and euphoria during IPO wane. Good companies would compound and poor companies like HPHT falter. So if we can identify great companies with great moats, buying them during IPO and just letting them compound is not a bad idea. Look at Google and Visa! These are two companies with identifiable moats during IPO in recent times.

There are companies that choose not to IPO though. Vitol (oil trader), Cargill (commodities trader), Ikea, Mars, Lego, Koch and the auditors (Deloitte, KPMG). These are well-known companies that are still unlisted. Well, traders sometimes do not want that kind of scrutiny that public companies have to endure while auditors would probably never IPO for the simple reason - who's gonna audit them? Still it is said that sometimes, the money's too good, so why share by selling your company to the public. One of Singapore's largest companies, Tee Yih Jia, founded by our own popiah king Sam Goi is also unlisted.

To put on a trader's hat, the probabilities are skewed towards buying and flipping for quick returns during IPO. Using the first chart, I would postulate that 2/3 of the time we can make money by flipping IPOs i.e. subscribing and then selling out when it goes up. We just have to be mindful we are playing the Greater Fool Game and we don't want to be left without a seat when the music stops.

As a true value investor though, it probably means that most IPOs are probably not worth looking at given the reasons stated above. We definitely do not play Greater Fool Games to benefit from others. But if we can really find gems with moats, then it's worth buying and holding to these compounders for good.