The last portion of this year's dividend list sees a hopscotch of companies from various segments of the economy. First up we have Berkeley Group, a property name from the UK. Next, European engineering related firms such as Smiths Group Inc and the French/Italian construction company Vinci. Across the Atlantic, US industrials: Emerson Electric, Cummins and healthcare firms: Gilead Science, Amgen, Johnson and Johnson were featured. There is also a paper packaging company: Mondi, a toy company: Hasbro and even a luxury brand: Coach, which is now renamed Tapestry.


Given that the lists were ranked by their dividend yield, we are also seeing valuations getting more expensive in this last portion. Most firms here are trading at mid to high teens PE while a few firms are at 20-22x PE. Emerson Electric, a world class automation play, trades at a rich 22.7x PE given that robots and automation taking over millions of jobs continue to dominate investors' and also the general public's minds.

Alongside the onslaught of automation, tech, internet, we would think that Cisco could be a beneficiary but unfortunately the stock has languished for many years and appeared on this screen multiple times in the past few years. Routers and switches, which were the core bread and butter of Cisco became commoditized and the firm needed to fight competition while reinventing itself. It managed to do a bit of that and the stock had recently started to perform rallying from the twenties to $44 today.

Cisco is now part of a mega important theme: cybersecurity.

The cybersecurity threat is real from hacking the government databases to phishing millions of accounts off Sony and Target to ransomware to simple fraud like Facebook friends asking you to buy Apple stored value card at 7-11. Cisco is riding on this tailwind albeit security and related services could be just 5-10% of its total revenue. The better way to play cybersecurity might be to buy the ETF HACK. The official name is ETFMG Prime Cyber Security, but the ticker symbol HACK is just so much easier to remember. 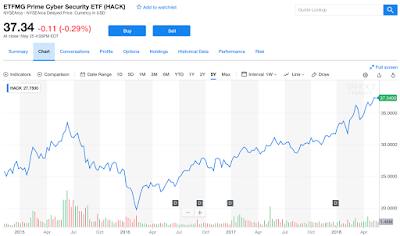 
The listing history is not too long as the ETF only came about in 2014 but it did show early signs of being a compounder. The list of stocks also look like compounders as they mostly deal with software services and hence capable of generating strong free cashflow (FCF) with the exception of one or two names. The top names are: CommVault (archiving database and emails), Trend Micro (antivirus), Palo Alto Network (network security leader), FireEye (cybersecurity expert) and needless to say Cisco itself. This is really an interesting ETF and I would be a buyer if it falls below $37.

The last stock worth discussing is Coach or rather Tapestry as it is now called. I bought into Coach in late 2014 when the share price languished under heavy selling as investors questioned its relevance in the new era of millennials, internet and Michael Kors and Tory Burch. "Coach was the brand that my mother relates to, not me." says the 20 year old millennial female. It didn't help that Coach would be selling its inventory on discount in outlets all over US and other parts of the world. Meanwhile the internet was filled with fake goods, or maybe real ones that were bought off US outlets and then sold in Singapore, Hong Kong and mainland China.

Its new CEO then, Victor Luis launched an overhaul campaign to restructure Coach. He brought in a new chief designer to bring in fresh ideas to supplement the monogram. He stopped the discounting at the outlets and he revamped stores globally to give them a better look and feel for the millennials. Finally, he bought Kate Spade, the millennial brand and change the company's name to Tapestry. Investors were elated and bidded the stock towards $60. I decided to sell so as to fund other US stock purchases. I still liked the story but the valuations no longer look appealing and it's really tough to say if Coach can become the LVMH of US. Lo and behold, the stock crashed 15% a few days after my sale. It was especially lucky because I decided to sell the entire position rather than a half sale as I normally do. This was because the position was not too big and it would make sense not to leave a residual that needed to be dealt with in the future. So, that's really pure luck, not foresight. There is no foresight in investing because the future is simply not predictable. Perhaps the lesson learnt is that buy-and-hold only works for certain stocks, definitely not fashion or tech. With that, we end this year's dividend lists. Hope this helps!