Chart of the Month #3: Life Cycle of Bubbles

The following are famous charts created by McKinsey (I believe), depicting the life cycle of bubbles as we have seen. This chart had gave a good explanation of at least three bubbles in recent history. The dotcom bubble, the Japan bubble and the 1929 stock market boom and bust that led to the Great Depression. 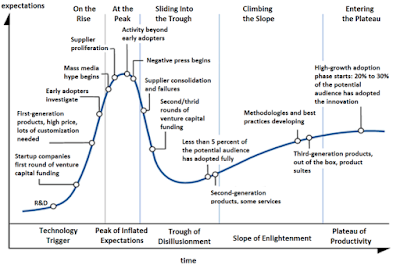 The chart above shows the phases of development staring with R&D and then moving to first generation products and how early adopters will join first. This pretty much described how the internet and the dotcom bubble had evolved from the late 1990s till today. 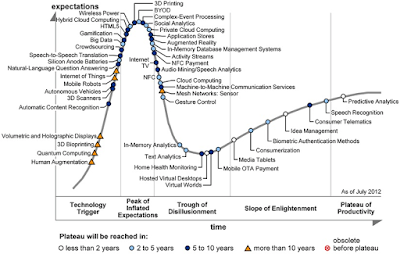 This second chart (above) tries to plot various technologies today into the same bubble life cycle. I think this was probably done a few years ago but some of the data points are probably still relevant. It is also worth noting that it takes decades after the initial hype for the stock markets to return to previous highs.

For the 1929 boom and crash, the US stock market only exceeded the previous peak in 1955 and good 26 years later. For the dotcom bubble, it took 17 years. Japan hasn't surpass the peak of 1990 after 27 years. So never get caught in a bubble!

Email ThisBlogThis!Share to TwitterShare to FacebookShare to Pinterest
Labels: Bubbles and Crashes, Charts