A trip to Omaha, Nebraska, USA is like a pilgrimage. Muslims hope to visit Mecca once in a lifetime. In the olden days, Christians went to Jerusalem on crusades. As value investors, well, we should pay homage to the world's greatest investor - Warren Buffett aka the Oracle of Omaha, by going to Berkshire Hathaway's Annual General Meeting (AGM) for shareholders, maybe as many times as possible before things change.

For the uninitiated - Berkshire Hathaway is Warren Buffett's investment vehicle which was a textile company that he bought 52 years ago. It went bankrupt but he used it to invest in other companies which then became the world's largest conglomerate (4th largest company by market cap). Some people ask is it worth making the 30-hour flight just to see him? What's the value add of doing that? What would he say that would be different from what he had said all these years? Isn't the whole AGM already broadcasted live on the Internet?

Well, we can always listen to Coldplay on YouTube right? Why do we go to Coldplay's concerts? Why do some die-hard fans fly all over the world to every concert venue to listen to them sing the same songs? It is for the experience. To share the atmosphere with like-minded fans. In a way, the trip to Omaha is like going to a live concert. Actually it's more a pilgrimage. It is very difficult for non-investors to understand despite our best effort to explain. But having really made the trip, I have this to say: the trip is worth every effort and I urge every serious investor reading this to try to go while both of them are still alive. Warren Buffett is 86 and Charlie Munger, his Number Two, is 93.

What's there to do in Omaha besides attending the AGM? Before the trip, I was also quite dumbfounded, would it be just attending the AGM and visit Buffett’s house? I was so wrong. There's so much to do! I would say that it might be worthwhile to stay in Omaha for 5 days or so to fully enjoy the experience. The usual affairs would be just 3 days from Friday to Sunday but in order to fully cover everything, we certainly need more days! 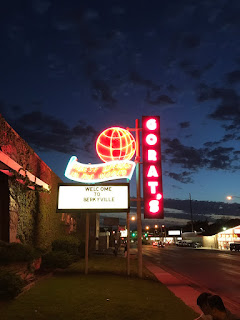 9. Attend other events surrounding the AGM (there are many, some with high entry fees - the key one being the Value Investing Conference which is a few hundred dollars for a dinner but there are also others which are quite affordable)
10. Last but not least, do the 5km Berkshire Run! 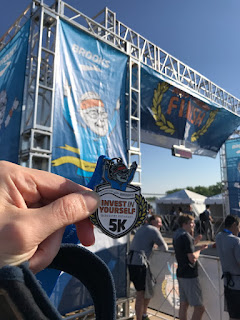 Ok so what are the lessons we can learn from such a pilgrimage? I would put the investing lessons in the next posts, which are some of their thoughts on technology disruptions, good businesses, the state of the economy etc. In this post, I would like to share some life lessons that he and the other speakers talked about. My favourite quote of the week was actually from Charlie Munger. Charlie is pretty much the all-important Number Two without which Berkshire would never achieve what it had achieved. Much like the trusted advisor and architect like Zhuge Liang of the Three Kingdom, Goh Keng Swee of Singapore and Steve Wozniak of Apple.

When asked what he admired about Warren Buffett most, he said this (I'm paraphrasing him): "Buffett is very much capable of continuous life long learning. He is a learning machine. Years ago he would never have bought Apple. Yet after learning about its products from his grandchildren, he bought it!” You see, in the past, Warren Buffett never invested in tech stocks because he believed he couldn't read them well enough but he had since bought IBM (and sold some stocks after it languished) and Apple. This proved that Buffett is capable of learning new things and changing his mind and admitting mistakes, learn from them and be a better investor, despite being 86 years old. Now he is saying he regretted never buying Amazon. Maybe he might just buy in 2017?

Anyways, after talking about this point, Charlie added the most wonderful quote in the week,


"I think that a life properly lived is just learn, learn and learn all the time. And I think Berkshire has gained enormously from these investment decisions by learning through a long, long period. That's continuous learning. If we had not kept learning, you wouldn't even be here. You'd be alive probably, but not here (in Omaha, at this AGM)."

At 86 and 93, these guys are still learning. Here's them telling us, never stop learning, certainly not at our age. The joy of learning is the impetus to wake up every morning, to read more and gain new knowledge. Then eat steak and continue to enjoy life! It reminds me how important it is to be able to enjoy learning, all the way, throughout our lives. Is the Singapore education system inculcating the joy of learning in our kids? That's a big question mark. 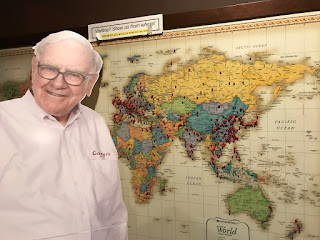 Anyways, that's Buffett's standing poster at Gorat's. The pins represent people coming from all over the world to eat and learn from him! Unfortunately, he wasn't at the restaurant when we were there and we missed him at the newspaper toss the day before! Hopefully that's a good enough reason to go again, provided the exit permit from OC of the house gets approved. Haha!

So that's the first message. Keep learning all the way! The second message came from the Markel AGM. Markel has been touted as the next Berkshire. It started as an insurance company for buses and trucking industries by the Markel family. It then branched out to other specialty insurance and as it grew, it used its "float" - or excess insurance premium earned by underwriting lots of insurance, to invest. This was pretty much how Berkshire grew in the early days. It had since invested outside of insurance and grew its investment portfolio substantially. Its current CEO, Thomas Gayner, is a remarkable guy and pretty much being compared to Warren Buffett. I attended his 2 hour AGM and learnt so much.

The next takeaway was from him. It was a simple message that came about as he addressed the audience. He speaks fast and most of it quickly lost amongst his words but this phrase was so strong and it just stuck. Again I am para-phrasing him:

In short, be consistent - say what you do and do what you say.

It's easy to just state but how many people can actually do it? And do it for over 50 years? In our current culture of ADHD (attention deficit hyperactivity disorder) demanding instant gratification, we are drawn to our phones every other minute when we get bored. We soon then get tired of the phone itself, and change them every year. In fact, we are changing everything every other year. Most people are changing jobs every three years, changing cars every five years, some are changing houses and even life partners sooner than ever! We are always searching for that something new, but never quite get it right. We want to choose to change but yet cannot accept change if it was pushed onto us. How ironic?

We cannot say what we do and do what we say because we lost the ability to focus, to really grit our teeth and do that hard things to get it right. To sweat it out, push and persevere. It's just too difficult and we are giving up too easily. What I realized is that such a kind of trip is good because it reminds us that it can be done. It is possible to keep saying the same things and to keep doing the same things and live in the same house for 50 years. That's how long term effort can be exhibited with the power of compounding and snowballing. 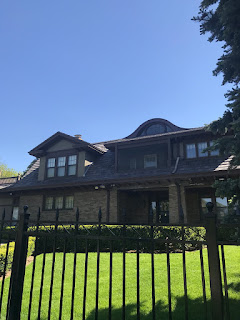 Next post, we will discuss the investing lessons. Stay tuned and wishing all Buddhists a very Happy Vesak Day!