Investing is a fascinating game in a sense that no formula ever works all the time. There is no "Bao Jia" or sure wins. There are no programmable solutions, no absolutes and we must always break the rules to win. There is also no such thing as never. Warren Buffett himself broke his own rules so many times, in order to win. He said he would never buy tech stocks, yet he bought IBM and Apple.  He concluded airlines won't make their cost of capital, yet he bought airlines!

Airlines, the one industry that was guaranteed to lose money! How to be a millionaire? First, make a billion dollars and then buy an airline! That's the infamous running joke in investment circles for decades. To ward off that taboo, Vietnam's most famous LCC (low cost carrier) airline deployed the auspicious red color and bikini girls to market itself. So far, it had a successful IPO, but we shall see! 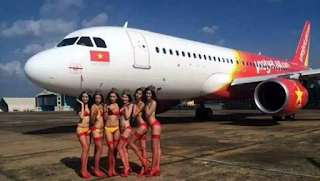 VietJet and its bikini girls

Singapore Savings Bonds or SSB is also an idea that is somewhat against the rules in value investing practice. Value investing targets high single digit return, not 1-2% return over 10 years. So why are we discussing SSBs here? Shouldn't we talk about Colgate and Unilever and Moutai?

Ok first let's look at what's SSB all about?

SSB was launched in 2015 with underwhelming response but had since grown to be slightly more popular. According to a recent ST report, 32,000 people had invested S$810 million in SSBs. This is 16x more popular than the conventional government bonds which require investors to hold to maturity i.e. 30 years for the longest issues. With SSB, we can sell and get back capital plus interest any time. However, the total investment so far is way below the S$4 billion target.

As another gauge of its popularity or rather un-popularity, we have hundreds of thousands of retail investors in the stock market (triangulated from 1.6m SGX CDP accounts with some that are likely dormant), the mere 32,000 in SSBs again pales in comparison despite the product being investable at just S$500! The lowest denomination for stocks would usually be four digits.

Why the un-popularity one might ask. I guess it's really about the lack of marketing and distribution. This is a product directly launched by MAS (Monetary Authority of Singapore) which obviously had no marketing track record and the banks, even though they are distributing the product, had no incentive to sell SSB since it sucks deposits out of their balance sheet and they don't earn anything by selling more (only S$2 per transaction!). Also, the interest rates are really not palatable to investors. The table below shows how it works.

SSB works differently from a conventional government bond as you can redeem it anytime. But because it provides this optionality, the interest rate is also slightly lower. Hence depending on how long you put in, the interest rate you get is different. Reading from the table, it says that if an investor put the money in for 1 year, he stands to earn 1.02% interest. This is similar with some of the fixed deposit schemes out there but as you can see, the interest rate creeps up the longer one holds. At 4 years, we get to 1.5% and at 10 years, we get to 2.27% (look at the average return per year not the interest in the middle row). This is actually close to where the conventional 10 year bonds are trading at.

The chart below shows that 10 year Singapore Government Bonds are trading at 2.24 to 2.32% yield. So, it's really not too different from SSB yield at 10 years. The trouble with bonds is that the global low and negative interest rate environment had really caused yield to collapse. Reading from the same table below, we see that 30 year bonds are trading at only slightly higher 2.5% yield. Holding this for 30 years gets you just 2.5% per year! Singtel gives you c.4% dividend with growth potential in India, Thailand and Indonesia!

Ok, so bonds are really too boring for value investors. We are talking about 1-2.5% return over decades. So why bring it up here? The argument here is that this instrument should really be competing with cash, not compounders or value stocks. This was the original intent by MAS, and if we think about it, it's really thoroughly thought through and quite beneficial to small retail investors. We all have dormant cash lying all over the place. This cash earns 0%. What we should do is to put some of our dormant cash into this (lowest denomination starts at $500!). If and when we need the cash, we can just take it out (but we do stand to lose the additional interest for the subsequent years). Everything can be done online. It's that easy.

Ok but what about fixed deposit schemes offered by the bank that are better? Well, they are usually for only 3-6 months and we have to keep rolling to enjoy the good rates. It's really a bit too much hassle for most working people and only retired aunties and uncles can afford to do that - queuing at the different banks to roll fixed deposits and get free Fitbit or porcelain sets. The irony here is that most aunties and uncles usually roll the same pot of money just to get that additional 20-30bps, but if they had put into SSB, they stand to earn up to 2.27% over time, more than 100bps incrementally.

As astute investors, we should also deploy some capital here bcos it's better than cash. Most investors usually have some cash, say 5-15% to have the optionality to buy great stocks if and when the opportunity comes. This cash earns nothing but if it is deployed into SSB, it stands to earn at least 1%. If it so happens that the cash is subsequently needed in a few months, we still get the accrued interest. So, it's essentially cash but earning interest. 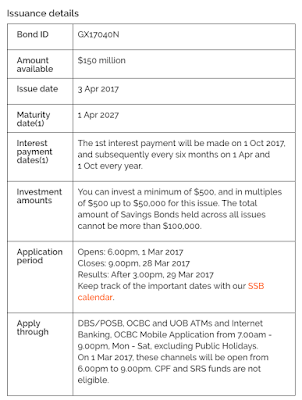 There is one last point to make which is listed in the details above. There is actually a cap on how much SSB one can hold. It's $50k per issue and $100k across all issues. That's like not enough to pay the ABSD for some who are thinking of buying their second properties. This is likely a precaution given that our Government is super cautious. We don't want some shady billionaire putting in one billion and then earning $20m per year out of this. Another caveat is that CPF and SRS funds cannot be used, unfortunately.

So, that's in short the idea that's against the rules. Investing and portfolio management is also about relative benefit more so often than absolute benefit. This is a lesson that some may never learn because we have been thought to think in binary terms - something is either good or bad, right or wrong. A portfolio is never like that. If this is better than cash, we should buy this over cash. We judge a stock by its relative upside vs other stocks in the portfolio. Never only looking on its own merit. By always thinking in relative terms, we can then upgrade our portfolio part by part and hopefully some day achieve optimization.

Email ThisBlogThis!Share to TwitterShare to FacebookShare to Pinterest
Labels: Bonds