Here's an investment opportunity of a lifetime, yes once in a lifetime. If there is one post that you should read in 2016, this is the one. It's about Vietnam - the last Asian Tiger.

For most of us in sunny Singapore, Vietnam is probably not on most people's radar. It's not as vibrant as Bangkok and the rest of Thailand, there is no historical site like Angkor Wat or Borobudur, hence not as big a tourist attraction. There are also no famous beaches, and no theme parks. Even the traditional costume Ao Dai (pic below) doesn't appeal much (sorry Vietnamese ladies) because it is an obvious rip-off of the Chinese cheongsam with an added disadvantage - showing less skin. Also, the investment story sort of pales against Myanmar's, which we saw a huge hype that started when Ms Aung San Suu Kyi was allowed to run office after spending 21 years under house arrest. Of course, Myanmar's property prices actually skyrocketed since 2012. Meanwhile, Vietnam had major issues after the Global Financial Crisis (GFC) which it still hasn't fully recovered from. It's currency, the Dong depreciating big time, the nascent property bubble burst and most investors then were still licking their wounds. 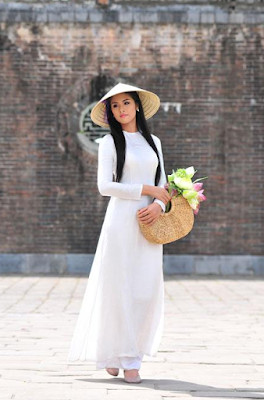 So what's the story now? Well here's the plot. In the past few years, China has gotten really expensive as a manufacturing base and global MNCs were looking for alternatives. Vietnam has a huge and young population (c.100m! Almost as big as Japan!) that is highly literate, hardworking and hungry. The Communist government has also seen how successful China has become and strived to modernize Vietnam. It's the same roadmap that all the past Tigers had followed, including our own beloved motherland's plan: start with manufacturing, lure MNCs with cheap workforce and government support, built up the skills of the people and put money in their pockets. As the nation prospers, GDP per capita compounds and property prices skyrocket. South Korea, Taiwan, Hong Kong and Singapore all prospered. Before the Asian Tigers, we had Japan and after, China, the biggest dragon of them all, basically following the "manufacturing to first world status" master plan. These countries succeeded following the same path transforming from developing to developed countries. So will Vietnam.

What's more: Vietnamese are also descendants of Han people, known for their tenacity and vigour. They will work hard and compete hard. Vietnam is also a coastal country with access to the vast oceans (as with all the other Tigers), which allows it to export manufactured products and import goods for internal consumption when the economy grows and its people become rich enough to buy good stuff. Hence it is highly probable than not that Vietnam will be as successful as all the Tigers and Dragons before her, if not more successful. She will also most likely be the last Tiger of our lifetimes, barring North Korea opening up. That's another story for another day though.

Well, stocks are also possible, but I believe the property story is easier to understand and probably gives higher ROIC and lower risk as we shall discuss below. As the country develops, not all regions will grow as quickly, it's good to bet on the commercial centre of the nation - usually the one or two main cities. Stocks are more difficult to capture one or two city's growth. In the case of Vietnam, the commercial centre that we are talking about is the Ho Chi Minh City (HCMC). This is a beautiful city originally named Saigon but changed to be named after the Father of Vietnam - Bac Ho, who led the country to freedom by defeating the Americans after a bloody ten year war. Or rather it was the Viet Cong, using guerrilla tactics against modern technology that won the day. The Vietnamese dug elaborated labyrinth of tunnels beneath American camps and surprise attacked them until the US soldiers were so fed up that they decided to wipe out Vietnamese by the villages. Elderly, women, kids were all not spared. (Well, that's an over-simplification but for more, check out Wikipedia or google My Lai Massacre). 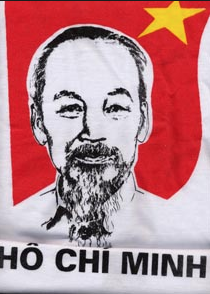 Bac Ho on a T-shirt


That's all history btw. The war ended in 1975 and the country started to rebuild after decades of trial and error, the last effort thrown off course by the GFC and set the country back for a few years. But today, HCMC is a spiralling city, something like Singapore in the 1960s, Shanghai in the 1980s and Bangkok some years ago. Motorbikes, rather than cars, jammed up the roads, high rise buildings are starting to pop up and road side stores and shophouses co-exist to provide local food and international cuisines. In today's world, we also see the co-mingling with global brands and modern concepts. Starbucks and designer cafes littered downtown HCMC and Zara and H&M have also setup their flagship stores. So this is the first important point - at the rate the city develops, we should see more modernization and property prices go up multiple folds.

Today, HCMC property prices range from $2,000 to $4,000 psm or per square metre (the convention used in Vietnam). In comparison, Shanghai is at $10,000 or more per square metre, Taipei is at $8,000 psm, Bangkok high end properties are at $6,000-9,000 psm. Needless to say, Singapore and Tokyo are much higher at $12,000 psm or more. If HCMC becomes on par with any one of these cities, we can expect HCMC properties to be multi-baggers. At the very least, it should double.

Now let's look at HCMC in detail, this is where it gets even more interesting.

Ho Chi Minh City (HCMC) is divided into two halves much like most major cities by a river. The Saigon River runs through it like a snake and the old city was mostly built on the west of the river. This is very much like Shanghai where Puxi was the old town and Pudong was designated as the new CBD, given that land was abundant and bare, so the government could designate and plan much better without historical baggages. 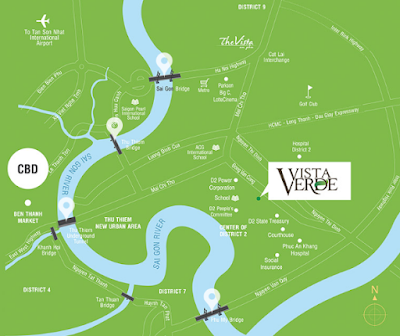 In HCMC, the old CBD (marked as CBD in a white circle above) was labelled District 1 or D1 while the new areas were labelled District 2 to 7 (D2-7). District 2 (D2) is the most interesting, spanning from the north east to the east with parts of it already connected to the upcoming metro network. The stylized map above from Capitaland's Vista Verde project shows it better. D2 spans from the area near the top two bridges are where current expat communities and international schools are located with metro lines being built to where Vista Verde stands, which is supposedly near the new CBD. Capitaland, Keppel as well as other developers are building multiple projects in the areas mentioned above. The price for some projects starts at $2,000 psm while District 1 prices are now at $4,000 psm and above.

If we trace the development of Pudong, we can perhaps see where HCMC D2 will go. Pudong started development in the 1990s when the Chinese government realized they needed to grow the city to cope with the development of the country. Pudong was ideal given its proximity as well as the availability of raw land. Today Pudong commands higher prices than Puxi which is why HCMC D2 could see prices leapfrog that of D1 and go even higher. Bearing in mind that both D1 and D2 prices will keep going up as the economy grows which means that D1 can go from $4,000 to $8,000 psm while D2 can go from $2,000 to perhaps $10,000 psm ie five bagger.

Of course this process will take many years as development of a new CBD would not be just a 1-2 year affair. While it is possible for stocks to achieve similar returns, it would take a lot more effort trying to analyze which stocks could do that with better risk reward profiles. It's also more difficult to buy Vietnamese stocks given that its stock market is still too nascent and lacks liquidity and depth.

Next post we look at some other factors and the risks, stay tuned!