Overseas Education Ltd (Bloomberg Ticker: OEL SP) is an intriguing small cap stock in Singapore listed in 2013 that almost doubled but then crashed spectacularly in the last 1.5 years. It now trades at 12% free cashflow yield, 11x PE and pays a 4% dividend (likely to be more going forward) and earnings are stable and growing barring Singapore's demise (i.e. our beloved little red dot one day becoming irrelevant). 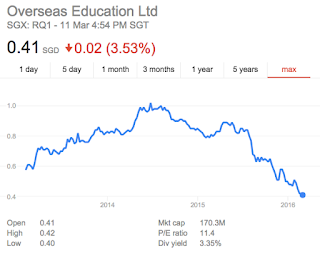 For the uninitiated, OEL operates the largest independent international school in Singapore called Overseas Family School (OFS) providing expatriate kids with quality international education. It started in 1991 and currently has enrolment of 3,000 students. It is the third largest international school in Singapore after the Singapore American School (SAS) and the United World College (UWC). However, as it has no affiliation to any nationality, it is also the school with the most diversity in the world, boasting a record of educating kids from over 70 countries in our little red dot.

Well then, why did the stock collapse in the first place?

This was largely caused by its move from the prime downtown Orchard campus to Pasir Ris in 2015. It lost 20% of its enrolment and together with anxiety in the stock market since the start of 2016, OEL found no buyers for its stock. It is also likely that some large foreigner shareholders could be selling to get out of their positions which put further pressure on the stock price. Now, to me, this looks like the perfect scenario when value investors should pounce and buy when others are fearful and wait for the stock to go 2x (or even 3x) in a few years.

Well, let's not get too excited. To be fair, the bear story has a few valid points:

1. Losing the Orchard location was devastating, it lost 600-800 students with some in their early years which meant a lot of lost future income. But this is now all factored in the price.

3. The weakness in the global economy has translated to a lot of expats losing jobs in Singapore, which exacerbated the decline in enrolment numbers that we saw. These jobs include functions in the oil and gas industry, finance and managerial positions that might not be replaced soon. This meant less expats and their families staying in Singapore for the next few years.

We shall come back to these points later. First let's examine the bull case:

Education is one of the most fantastic businesses because the schools have a lot of pricing power. Parents are not about to be stingy when it comes to their children's education. They will pay an arm and a leg for good quality education especially if the school is "branded". Brand is very important and once built, its reputation lasts for decades (think Oxford, Harvard, Qinghua and in Singapore, Raffles and Hwa Chong) which meant that competition is actually largely irrelevant. Costs are relatively stable (teachers and depreciation essentially) and easily managed and offset by rising school fees which meant that marginal profitability is very high once the fixed cost is covered.

OFS has been slowing building its brand name in Singapore for twenty over years albeit it has always been outshined by the Singapore American School, UWC, Tanglin Trust, Canadian and some others with affiliations to their home countries. Over time, however, it should slowly build stronger reputation given its dedication in hiring the best teachers and its sheer size and outreach in Singapore. It is well-known in the global recruitment of overseas teachers as one of the best employers globally. Hence its should have the ability to grow and retain its talent pool of teachers and continue to build its brand power.

Anecdotally, expat mums also like to share that their kids enjoy and learn a lot in the school and would not want to be transferred to some of the other top brands despite the school's low key profile. As a result of its diligence in hiring good teachers, emphasizing quality and good management of its strong executive team, it's enrolment had grown steadily from 200 students in its second year of operation to over 3,000 students today as shown in the chart below until 2013 (when enrolment peaked at 3,600 students).

OFS' test results have also improved over the years as a natural consequence of its focus on providing good holistic education. It has gradually nurtured more and more students getting more than 40 points out of the full marks of 45 in the globally recognized International Baccalaureate (IB) test. While it still has some distance from the three Singapore schools offering IB to Singaporean students (with c.25-50% of students getting 40 points or more), its test results are remarkable considering it does not have the advantage of nurturing most of its students for more than a few years since expats move around a lot to different global cities all the time.

Hence while OFS had seen a dramatic decline in enrolment as a result of its move to Pasir Ris, it should continue to grow as long as Singapore remains relevant economically and can attract global expats to live and work here. OFS should see net enrollment growing by 150-200 students or so which mean that it should take just 3-4 years for it to recover its enrolment to the 2013 level. From there the school could grow to fill up its campus capacity of more than 4,000 students at its new location over time.

One important point is this: even if enrolment growth is slower than expected, education, especially international school education, is a business that would see 5-6% price increase annually. This means that its FCF of S$20m currently should be the bottom because even without increasing enrolment, one should expect a base case scenario of its FCF growing 5-6% on school fees increase alone. Obviously there is quite a good likelihood that Singapore remains a magnet for expats, i.e. the number of students would increase by 5-7% per year (150-200 out of 3,000) and FCF explodes to S$30-40m by growing 10-15% over the next few years. At S$170m market cap today, this stock is a steal!

Next post, we look into more details surrounding its financials and the risks.