The Force Awakens: Thoughts and Takeaways

Star Wars: The Force Awakens opened last weekend and smashed all box office records. This episode, #7 in the franchise, will likely make USD 1-2bn in the cinemas alone. When Disney bought Star Wars for USD 4bn in 2012, everyone thought they were stupid. Why pay so much to George Lucas who did a crap job trying to do the prequels (Episode #1-3)? Also how can a 30 year old dated sci-fi saga be worth so much?

Now, Disney is having the last laugh. Episode #7 alone might rack in enough profits to cover the USD 4bn cost and there's five more in the pipeline. Yes, there will be Episode #8, #9 and all the way to Episode #12. The motto is: don't stop if die-hard fans will keep coming back for more. Based on my very crude Google search estimate, there could be close to a million Star Wars fan globally, counting both die-hard and casual fans. Over 60,000 of them gather for a May 4th Star Wars Celebration in the US every year.

Coming back to the math a bit more, here's some interesting revenue and cost breakdown:

Gosh, George Lucas might be wondering whether he was underpaid. Should he have asked for USD 8bn instead? Well actually that's not entirely fair because he could not have generated USD 4-8bn if he did not have the Disney marketing machine behind it. Lucasfilm Ltd was making a miserable tens of millions from merchandise and mostly from Lego Star Wars.

Why did Star Wars do so well even after so many years? What about Disney, is it then a super investment? What are some takeaways we can learn from this? This post hopes to answer some of these questions and provide the investment thoughts as well. 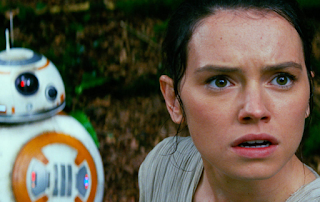 Ok why did Star Wars do so well? For one, pretty female leads. This instalment we have the 23 year old Daisy Ridley (that's her in the pic above with the cutesy BB8 droid) as the new protagonist, probably the prettiest amongst all the female stars. Well, Carrie Fisher wasn't too bad some 35 years ago although the bikini definitely helped. Natalie Portman was okay but Ridley really gives a fresh look despite her scavenger outfit. Okay, okay, beauty lies in the eyes of the beholder, yes and if beautiful ladies make good movies, then we won't have flops liao, ever. So it's not just about pretty girls.

Star Wars worked because it combined so many qualities of good movie-making: a popular genre (sci-fi) with a vast expanded universe, adrenaline pumping sequences, plot twists, innovative gadgets (lightsabers!) and of course the love story. Romance bring in the ladies, or at least help convince them to watch with their hubbies. Yes, there is still the luck element. The first Star Wars was really a lucky hit. It had huge production hiccups and back then, an untested plot, genre, storyline based on a Japan cult movie: Akira Kurosawa's Hidden Fortress. But when it became a success, it paved the way to build a franchise.

We just love familiarity which is why franchises work. Today, 60-70% of the top grossing films are franchises: Harry Potter, Jurassic World, Marvel Super Heroes, Lord of the Rings and the list goes on (see chart below). This is very similar to branding, which is why we go back to the same brand of toothpastes, the same food chains, the same cosmetics and the same phones and computers which we have used before and liked it. Nobody likes to learn how to use a new OS.

Once we built a brand, we can have pricing power and pricing power is one of the most important criteria for a good investment. Strong brands can build in pricing power above inflation which is the way to supernormal profits and margins. Star Wars merchandise can be priced ridiculously and fans will just pay up. This is why Disney make billions off merchandise, not just Star Wars, but think Mickey, Disney Princesses, Marvel Heroes and all its other franchises. 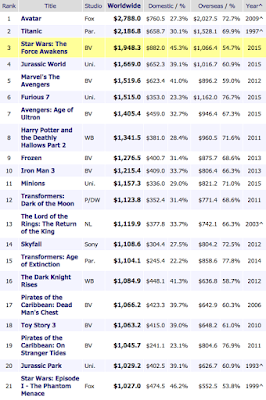 In fact, Disney has 8 out of the top 20 box office movies of all time from Marvel, Frozen, Pirates of the Caribbean, Toy Story and needless to say, Star Wars. So does it make Disney a super investment? Well it's hard to say, because it's not cheap. Disney generates c.USD 7bn in free cash flow annually but trades at a market cap of USD 180bn, that's a 3-4% FCF yield and a big part of the business deals with sports: they own ESPN which has a different business model and analysts argue that costs to acquire content (rights to live telecast sports games) are rising sharply which hurts Disney.

But in the franchise business, Disney is unbeatable. Essentially, it had become a buyer of choice for franchise creators. Pixar, Marvel, Lucasfilm all chose to be bought out by Disney because they knew their life-works would find a better home and soar to greater heights. It has become an aggregator of good quality content, not unlike Berkshire Hathaway as a good aggregator of high quality businesses. With more and more content, Disney is then able to drive more merchandise sales, more synergies between its various businesses (other than sports).

I guess this is really one of the important lesson learnt in investing: look for good aggregator stocks. Companies that have built that capability to deliver value add by building on its strength of aggregating businesses. They just become a locus of growth and keeps attracting the good stuff to them like a strong magnet. This has been the model of growth for some US companies for some time. Especially in certain sectors like pharmaceutical and medtech.

Even in our daily lives, we can strive to be an aggregator of good quality stuff. We should aspire to aggregate wisdom in some domain and become a master of sorts (yeah like a Jedi Master). We then build a brand for ourselves and people would come to us. There are many niches that one could fulfill. I am sure we know friends who are good at music, or IT, or art, or food, or finance and we seek them out for their expertise sometimes. We should seek to be an aggregator in a field we are interested in and have established some know-how and expertise. 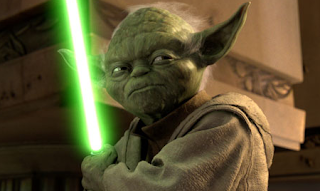 Strive to be a Jedi Master

The final point I would like to make for Star Wars is the offline and online argument. This came as a revelation in 2015 as online moved to really dominate our lives after 15 years since the dotcom boom and bust saga of 1999-2000. Online and internet came one full circle in the one and half decade fulfilling the prophecies that drove the bubble then. Now we buy groceries online, pay our bills online, chat with friends online, watch movies online, in fact we can pretty much live our lives online. What does this mean for the offline world?

It means that whatever cannot be done online becomes really, really scarce and people seek to do it and cherish these rare offline moments. Every damn thing has become a commodity when it goes online so offline is left for things that are really so bloody important (or simply a hassle sometimes though if the segment hasn't caught up with the online fever, like government related matters or banking) and we will pay any price to do it offline for that experience (obviously not for the hassles though). Again, as online dominates our lives, for the really important offline events, we will pay any prices for the unique experiences in the real world.

That's watching Star Wars in the theatres. The internet has taken over the world and we can pretty much watch any movie online, paid or pirated. But if there is one movie in 2015 that you would want to watch it live in the cinemas, just like the good old days, there would only be a handful. And Star Wars would rank pretty near the top. In fact for Star Wars fans, it would be at the top. Now these fans would drag their loved ones to go with them. Or better, they would first watch it once themselves on the first day, then drag their loved ones to go with them for a second round. This explains the huge box office sales.

That's what is really happening in the real world. Since everything has gone online, what is left offline has to be really important. People will cherish the remaining offline experiences and will be willing to pay huge premiums to get these experiences. Yes, it's pricing power all over again. Think of live concerts, Michelin star restaurant meals, theme parks, birthday parties, invitation-only events and even shopping. People want to be awed when they do things offline. Hence they are no longer shopping at some local malls. They want to visit flagship stores to discover new things. They want unforgettable experiences. It's not shopping to buy stuff. We can do that on Amazon, it's about creating awesome experiences. They go to the flagship Disney store to see the Princesses or meet Darth Vader. That's shopping in 2015.

Disney understood this and embarked on an ambitious marketing campaign globally with Star Wars. We have the Changi Airport campaign in Singapore which is becoming a huge success and we see families flocked to the airport for the experiences: a photo on a life-size X-wing and another one battling the Dark Side with lightsabers. Then flooding Facebook with Star Wars photos, intriguing more people to go Changi and then go watch the movies. This offline and online loop is really the force awakening the new paradigm shift as we move forward. The winners would be companies that could find the balance well between both offline and online, the light and dark side of consumerism.

May the Force be with you! Merry Christmas and Happy Holidays!