I just finished this interesting book that gave a good perspective on Singapore's recent history from the former head of civil service Mr Ngiam Tong Dow. It was published a few years ago but the topics are still pretty relevant: public transportation, jobs, housing etc. I think every Singaporean who has an interest in public policies should read this book. 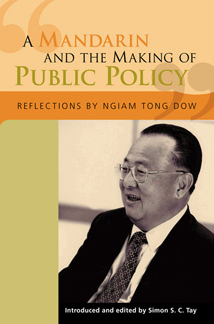 For me it was especially enjoyable reading the parts about our political leaders Mr Lee Kuan Yew, Dr Goh Keng Swee and Mr Hon Sui Sen. Mr Ngiam described how the trio formed a very formidable team that help transformed Singapore to what it is today.

Lee Kuan Yew - the visionary leader setting the direction, convincing the public, fighting the enemies both within Singapore during the early days and the external adversaries that were just waiting to see us fail. But of course, we didn't. Mr Lee is still fighting today. He has my upmost respect.

Goh Keng Swee - the economic and overall architect, building up our various institutions and devising strategies to make sure Singapore succeed as a small nation without a hinterland. He created our armed forces from scratch, helped put in place our education system, started countless agencies down to recreational facilities such as our Bird Park, Zoo and the Chinese and Japanese Gardens. He is my idol. Really. This blog has a post dedicated to Dr Goh.

Hon Sui Sen - the implementor or "builder" in Mr Ngiam's words who helped rallied the civil service and rolled up his sleeves and did a lot of the heavy lifting. In my humble opinion (and probably Mr Ngiam's as well), he is one of the most important unsung hero in the history of Singapore. Mr Hon, who contributed so much to Singapore unfortunately passed away in 1983 due to a sudden heart attack while in office. 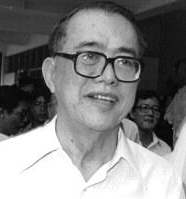 The investing lesson here is about management. In a company setup, I would say that there are also three very important positions.

The Chairman - the visionary who understands the big picture and help set the direction for the company.

The CEO - the architect who devises strategies based on the firm's strengths and weaknesses to help create Blue Oceans where the super profits could be made.

The COO - the implementor who is in charged of the day-to-day operations and really doing the heavy lifting while giving instructions to the ground troops.

Of course, some of the roles are intertwined. In a lot of cases, the CEO is the visionary as well as the architect while the Chairman is more of a symbolic figure. And a lot of companies have one person holding both Chairman and CEO positions or CEO and COO positions.

As investors, we should be looking at the management team to determine whether the three roles are duly filled. Lacking one or two of the roles would be very detrimental to the long term survival of the company.

I would argue that Apple, since the demise of Steve Jobs, lost both the visionary and the architect, who were obviously filled by Steve himself. Today the company is being helmed by the implementor Tim Cook who is unable to set the direction and devise Blue Ocean Strategies for the company.

Of course, I could be wrong. Given Apple's ability to attract talent, there could be a team of architects filling in that role but the visionary leader is probably lacking and it would not be easy to find one any time soon.

Anyways, back to the investing lesson here: look out for the three important roles in the management team of companies. Do they have the visionary, the architect and the implementor? That's essential for success.

Part II is out!