Return on Investment for 38 Oxley Road

With the whole Singapore intrigued with the 38 Oxley Road saga, it is hard to avoid the discussion, be it during lunch, on Facebook and Instagram and worst of all with international friends. This saga could be a watershed moment, marking the downfall of a little red dot, if it is not resolved amicably asap. But since this is an investment knowledge infosite, let's leave the politics to others to comment. Today we shall focus on the investment aspect.

The investment story of 38 Oxley Road is also quite intriguing for those who would be interested in investment returns. In this post, we hope to capture the no.s and paint some scenarios, some very rosy, hopefully to make people forget the disgust and disgrace of the whole situation. Oxley Road was named after a certain Thomas Oxley, a Brit who owned a nutmeg plantation in the 1890s. It was then sold to a Jewish merchant which presumably then rented the house to Mr Lee Kuan Yew's family during WWII. In his memoir, Mr Lee Kuan Yew wrote that he rented the place for $80 a month in c.1944. After the war ended he and his wife went to London to further their studies and got married. They officially moved into the house in 1950. 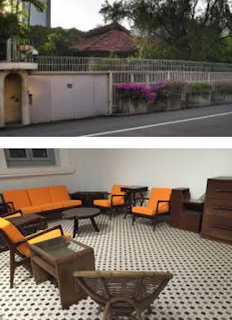 
It was not clear when he bought the house but based on circumstantial evidence, one could conclude it could be somewhere between 1945 to 1955. For our calculation purposes later, let's put it down as 1950. The value of the house is much harder to determine. In his memoir, he did mention that back then a decent house could be bought for 12 bottles of Johnnie Walkers towards the end of the war as families ran out of things to sell, like jewellery, the motobike or car, or even family heirlooms, so finally they would sell their houses. This anecdote itself probably deserves another post as it is not with zero probability that we would not revisit those days.

Back then, paper money (which was issued as banana money by the Japanese) was worthless and the economy degenerated and people resorted to barter trade in order to survive. So what became more valuable and could be used as currencies were cigarettes, liquor and usable stuff. Of course gold was on a class of its own. While it cannot be used in daily life, its value had been determined and recognized over the centuries which is why I believe all investors should have some physical gold in their portfolios. It need not be a huge chunk, maybe just 3% but in the improbable event that the modern financial system breaks down, the only asset that will hold its value and sustain daily life is gold.

Ok let's get back 38 Oxley Road. Where were we?

Yes, we were trying to determine its value back in 1950. We have a few numbers to work with. 12 bottles of Johnnie Walkers and $80 of rent per month. Today, 12 bottles of Johnnie Walker would cost between $2,000 to $4,000 depending on which label we are talking about. The Blue Label in some kind of limited edition would cost even more. Anyways, translating these numbers back to the value in 1950, based on an inflation of 3%, we get to $300 to $600. Geez, imagine getting a bungalow at $300! That's probably not too accurate. It could be as low as $1,000 but $300 seemed like too much a stretch. Next let's work with the rent. We know today that rent in emerging markets could be a high single digit or low double digit. A quick check on the rental yield in Africa today points towards that as well.

In a recent transaction, we knew that a Chinese developer bought a piece of land in Stirling Road, paying over a billion dollars for 21,000 sqm of land. That's over $1,000 psf for Stirling Road, near Queenstown MRT. Based on just the psf and land size, we can then know that Oxley should be worth at least $50 million since it's around 1,000 sqm of land. Of course, Oxley is not Queenstown and again the right number should probably be multiples of $50m. If it is 3x, then it's $150m. So there we have it, 38 Oxley Road today could be worth $24-150m.

So based on these numbers, the return on investment for 38 Oxley Road after compounding for 65 years (1950 to 2015) ranges from 12 to 18%. That's a very decent number. Its at least 50% more for this site namesake! It definitely beats 95% of all professional fund managers out there and almost on par with the world's greatest investor, Warren Buffett's record of 20%.

Ok so here's the kicker. 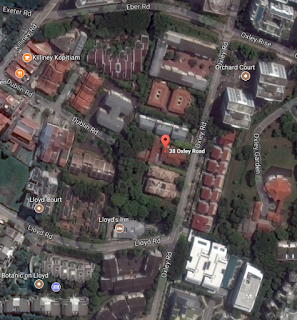 
If you look at the map of Oxley Road above. The plot ratio of the whole area is very low because when one of Asia's most important person was living there, we couldn't risk a sniper in a tall building assassinating him. So it was kept incredibly low at 1.4 whereas the surrounding is at 2.8 to 4.9. So if Oxley's plot ratio is relaxed, we are talking about 2 to 4x increase in plot ratio. This meant that a developer would be happy to fork out even more to acquire the hardest-to-acquire land in that whole area. Audaciously, let's say that 38 Oxley Road could be worth 2x of that $150 million number, at $300 million. Also, since we were never quite sure exactly how much Mr Lee Kuan Yew actually paid for Oxley Road, if we assume it's really closer to 12 bottles of Johnnie Walker, say $1,000 back in 1950, we get a new ROI of 21.4%, beating Warren Buffett's record. Furthermore, it compounded for almost 15 years longer than Buffett's reign hitherto. That's never been done before.

In conclusion, if that turned out to be the true scenario, Mr Lee Kuan Yew, is Singapore's best investor and our answer to Warren Buffett.