Eleven years ago this month, Lehman Brothers, one of the largest investment bank in the US, file for bankruptcy protection. It held over USD 600 billion in financial assets. The Fed and the other America banks had already engineered two other bailouts in the prior months: Bear Stearns and Merrill Lynch. Bear Stearns was sold to JPMorgan at $2 per share, along with all its assets and liabilities. This allowed the stronger JPMorgan to slowly clean up Bear Stearns' books which limited impact on the markets. Today, nobody remembers Bear Stearns. 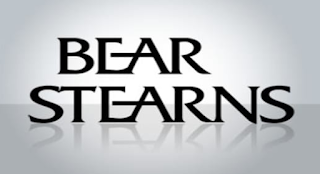 
Merrill Lynch got a good deal on the eve of Lehman's collapse, it was sold to Bank of America at a 70% premium to its last traded price. Unfortunately, it was not enough for Temasek, who bought it about a year ago and ended up losing a big chunk of its capital. But most importantly, the dirty laundry was kept out of limelight again and the buyer spent years cleaning things up. Alas, it was not so with Lehman Brothers.

When Lehman went down, its USD 600 billion of assets which was linked to trillions more was exposed. It pulled down the global financial system like a broken spider web and triggered the Global Financial Crisis. It was serious. Many believed that the worst case scenario was the end of our financial system as we knew it if the powers that be did not take the right steps. Fortunately they did.

In the aftermath, AIG, the insurer, was broken up as it insured those who bought sub-prime mortgages, including Merrill, and was on the hook to pay up the losses. The rating agencies were affected. They gave their stamps on approval to sub-prime and misled everyone. The US Treasury was also force to take over Fannie Mae and Freddie Mac, hitherto listed companies.

The GFC indirectly caused the banking crisis in Europe as banks in Greece, Iceland, Italy and UK all held financial assets related sub-prime and were in trouble. Asia was not spared. the Chinese government pumped the now notorious RMB4 trillion into its own economy to mitigate the effect of the global financial meltdown. It would continue to intervene and ultimately added close to USD 1 trillion in economic stimulus which ended up becoming bad debt as the money was inefficiently used, such as building entire cities with nobody living in them. 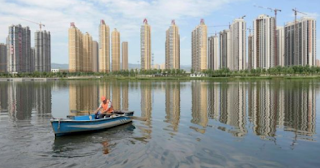 
Back in the western world, the central banks launched quantitative easing (QE) to try to jumpstart the economies. They flooded the global financial system with money which ended up in the hands of a small segment of the population. These were people on Wall Street, people involved in prime real estate (including Singapore), the private equity folks, bitcoin promoters, people who dealt in art, wine, collectibles and needless to say, stocks and shares - yes all of us reading this. Not forgetting to mention, a few billions also went to Najib and the other corrupted governments around the world. Globally, QE did not benefit the masses. It causes a wider disparity between the haves and have-nots.

In retrospect, the issues today, Brexit, trade war, bitcoin, shadow banking all came about eleven years ago when Lehman collapsed. We are still suffering from the lingering effects of the global financial crisis.

At the start of 2019, the risk that loomed large was Brexit. In 2016, the gap between the haves and the have-nots played out in the Brexit referendum and the have-nots won with 1.9% more votes (51.9% vs 48.1%). The then Prime Minister David Cameron resigned to take responsibility. But Brexit was a pyrrhic victory. The Brits wanted to leave Europe but did not know how. It was, and still is, a big mess. After two and half Prime Ministers and with one month to go, the probability of UK exiting without deal looked very high. If it happens, UK will go into a recession and millions of Europeans in the country become refugees overnight. It would be a disaster. 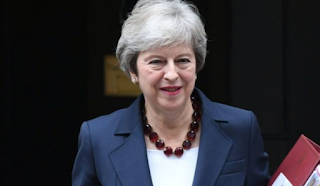 
Then, there's Donald Trump. Again he was elected because the have-nots thought he would help level the playing field. He decided that China was the root cause of all the world's issues and waged war against the Middle Kingdom. It started in July 2018 with the US imposing tariffs on USD 34bn worth of goods but soon expanded to more than USD 300bn and China hiked its own tariffs on over USD 100bn on US imports. This caused significant worry in the markets (even though it was actually smaller than Lehman's balance sheet) and global exporters and related stocks in China, Hong Kong, Japan, Germany and many parts of the world were negatively impacted.

The trade war had also morphed into a strategic war on other fronts with Huawei being the prime example. Huawei is China's lead general in the technology war and must be killed. Cybersecurity warfare had already been fought and real world skirmishes likely occurred via proxies in countries like Syria and Afghanistan. The read should be this: the trade war will not go away, it's a strategic war. Hopefully it would not become another Cold War.

Having said all that, China has not really retaliated with a real damaging blow to the US. It could outright ban all US goods and services. It had already banned Google and Facebook, why not Apple, Hollywood, Microsoft and all other services? Well, China probably has a different thinking altogether. This trade war, while damaging now, is not a big deal in China's own big picture.

At a high level truce meeting held in late August, the delegates on both sides sat at the negotiating table behind a huge wall with a Chinese poem with an interesting allegory. China was a mountain that had been around for thousands of years, while a passing cloud (i.e. US) tried to wage a storm to intimate the mountain. It was a futile effort. In some sense, it's true. Huawei will emerge stronger after this saga. China will continue to gain technological and strategical advantage. Its brands, capabilities will grow stronger and it will have more allies in time. 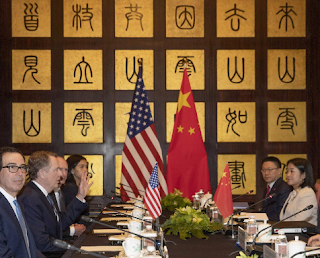 Phantom message for the US


So what does this means for the markets?

It just means turbulence will continue. The risk is on the downside rather than the upside. We have to use higher prices as sell opportunities. This situation has not change since our last market update. We are still at the late stages of the bull market. It's hard to spot when things would turn. It could continue to be like this for another 12 months. If the Fed cut rates more aggressively, the market could even rally further. Then we look real stupid selling now. But such is investing. We can never tell. So, we move in incremental steps prudently.

There are also no signs of weak links could bring us to another financial crisis. Back in 2008, we could see the weak links although it wasn't clear that they would be so devastating. People talked about sub-prime for months before things imploded. Bear Stearns went down first. On hindsight, those were big warning signs before Lehman Brothers' bankruptcy. Today, there's no canary in the coal mine, yet. Or rather, it's still too difficult to spot. One could be Uber and Wework and the likes of startups with their diminishing valuations. The other could be the old shadow banking system in China finally blowing up or a big entity in Europe finally caving in, pulling down things as Lehman did. It's always hard to tell before it happens.

Meanwhile, Lehman's phantom menaces, so we need to stay vigilant and raise cash!