Global markets fell c.6-10% last week. The US markets finally cratered after months of strength despite markets in Hong Kong, China, Japan, Europe correcting, led by the internet names that had done so well. The question is then whether this is just a correction or is this leading to capitulation?

Well, the markets seem to be saying this is just a correction for now. Stocks started recovering slightly on Friday (12 Oct) after the dramatic fall on Thursday. But we need a few more days this week to be sure. Valuations are always good gauges, with global PEs of global stock markets are at mid to high teens, we are not seeing over-valuation in the broad sense. Of course internet names had been expensive which is why they led the downfall.


Besides the surge that led to over-valuation in the internet names, the big reason for this sell-off is the rise in bond yields. This had been raised before when US 10 year Treasury hit 3%  earlier in the year. Now that it seemed that 10 year bonds going above 3% had been more or less established, the theory is that earnings yield should also normalize? This means stocks have to fall.

Recall that we discussed how lower risk free rate (at 0-1%) would cause everything to go up, since investors require less and less yield to compensate themselves. That was why property globally went through the roof, why 20-25x PE stocks became normal and why art, wine, watches and other assets began to appreciate in value. Now if this trend of higher yields continue, then everything should reverse. This can be really scary. 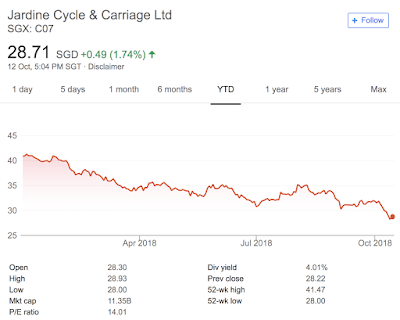 
But for now, this seemed to be a correction and not a capitulation. I am not suggesting we buy anything. These are tough times. Valuations are not cheap, there aren't too many interesting stocks to look at and other asset classes don't quite seem fit the bill as well. I would think that Tencent might be interesting. In local markets, I still prefer the old economy names. Jardine Cycle and Carriage have fallen to such low levels that it's dividend hit 4% and sum of its parts are adding to more than its whole.

However, every party must come to an end, we are into the tenth or eleventh year of markets rallying. This is a very tired bull market. At some point, something gives, we have to hope it is not like another Lehman type crisis. Because the next big crash could really mean the end of the global financial system. So far, there are no signs but we must be vigilant. Meanwhile, the music is playing and so we dance!