Okay, as promised, here's the investing lessons that we can learn from this year's Berkshire Hathaway's AGM (Annual General Meeting for Shareholders). The first lesson came as a big surprise for many. It came about when Warren Buffett was asked why did he advise his heiress (second wife) to buy S&P500 rather than continuing to put her money in Berkshire Hathaway after he is no longer around. He was dumbfounded for about a second which afterwards he recovered and gave a succinct answer:

The S&P500 represents the best of the best 500 companies of corporate America. These company will continue to thrive and it makes perfect sense to buy them. Berkshire will continue to do well. But 30 years from now, or 50 years from now, it will depend on who is running Berkshire at that time. I just thought it would be wise for her to put her money with America's best 500 companies rather than worry and worst listen to unqualified advisors about what to do. (I am para-phrasing him, these are not his exact words)

Meanwhile, Charlie, in his usual style, munching See's Candies, would bet on Berkshire and ask his heir to do the same. I guess both of them are right. Warren is right because the S&P had a century of track record of generating 10% return per annum over time. Berkshire would be dependent on the manager. In some sense, Warren believed that the managers after him would not be able to beat him. Not the current handpicked ones, but the next one and the next one. Who dare says Berkshire would continue to do well indefinitely without Warren and Charlie.

They are just so unique! Look at them! 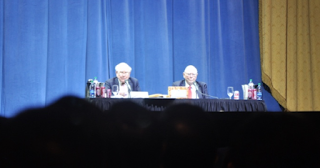 
Charlie is also right because it's the right thing to say. The next line of managers are in the same stadium and to say that it would be best to investing S&P after both of them are gone is akin to slapping their faces. Or admitting that they would not be as good as their predecessors. Also, Berkshire has built this portfolio of strong solid businesses over these years, surely they would continue to do well for at least a decade or two. No matter who's running the show.

Berkshire Hathaway was founded in 1965, the same year that our beloved country gained independence. The first generation of leaders worked their asses off to make sure that they worked. They have built such strong foundations that we now take for granted. Singapore today enjoys the first world infrastructure, standard of living and status and it is inconceivable that this would crumble in a decade or two. But in 50 years, who knows? No small country ever survived more than 200 years. Even the mighty Sparta. Sparta fell into a long period of slow death decline shortly after they made the legendary last stand against the Persians, depicted in the movie 300 and its sequel. 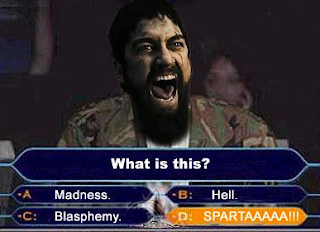 Parody of a scene from 300, movie about Sparta


Similarly Berkshire had benefitted from Charlie's and Warren's continuously learning for 50 years and become the portfolio of first class companies. It took them a lifetime to amalgamate the these businesses to make Berkshire Hathaway today. In fact, the top few companies, according to Warren, makes up 9.5 Fortune 500 companies. These great firms - Burlington North, Coca Cola, American Express, Geico insurance, Wells Fargo, See's Candies will continue to do well for the next decade or two. But in 50 years, who knows? Very few companies last for such long time span. There are some family owned businesses that lasted centuries, but most companies don't. The only company surviving today in the original 30 Dow Jones started in 1896 is General Electric.


Hence to think that Berkshire will do even better than the S&P500 over the very long term is wishful thinking. Which brings me to the investing lessons today - maybe astute investors like all the readers here should always consider some ETFs in our portfolios. Long time readers of this site would be familiar with some thoughts on ETFs, which are labelled under ETF. In short, initially I thought that we should have some ETFs, but then realized not all ETFs are created equal so maybe not and now I am gravitating towards having at least 2 or 3 ETFs to be a substantial portion of the portfolio. Needless to say, the basket should include the S&P500. Having said that, I haven't bought any. I have ETFs but mostly legacy ones from the early days which are not doing well.

Anyhow, we should definitely reconsider ETFs!

For the world's greatest investor (and stock picker) to come out to say that he wants his heiress to buy ETFs and to thank John Bogle, the father of ETFs at his AGM, to me, means something. Hence my change of heart with respect to ETFs. Well, I don't think it's good to buy the S&P500 now at all time high, but someday, we should put some money and dollar cost average that over time. However I don't think our own STI falls in the basket of right ETFs to own and I would prefer to pick the few winners in Singapore - Singtel, SIA Engineering, Jardine Cycle and Carriage etc.

The next big lesson was the technological disruption that had dawned upon us. Warren Buffett and Charlie Munger never touched technology because it was too far from their circle of competence. They preferred brick and mortar businesses. They like old economy, solid, tangible businesses. In 2000, they completely missed the tech bubble and they were right then. They were ridiculed then revered bcos as the bubble collapsed, their wealth compounded! Fast forward 17 years, we are seeing the same story. Old economy dying but tech thriving. Today the top 10 largest companies in the world are dominated by tech firms. 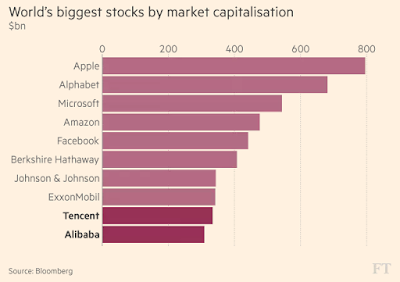 Heck! There only 3 non-tech firms: Berkshire Hathaway, Johnson and Johnson and Exxon Mobil. Talk about deja vu! But there are some differences. Today, unlike the 2000 techies, these firms have earnings. Apple makes US$50-60 bn net profit! Together these companies are generating hundreds of billions in profits. This is bigger than the GDP of some countries. Besides making tonnes of money, these firms have also created huge moats around their businesses. It's their eco-systems. They managed use their eco-system and arm-twist their ways to cannibalize the real economies. Google is eating the old media and advertising companies' lunch, Amazon is eating Walmart's lunch and Uber (still unlisted) is eating Comfort Delgro's lunch.

In fact, we are so tied to some of these system it's hard to unplugged. Just imagine if we are not allowed to use Google today for some reason, how inconvenient would our lives become? We can't even drive properly since we rely on Google Map so much these days. Or if we can't Grab or Uber. Or if Apple disappears today. A huge part of the world would be dis-advantaged as they find an alternative for their iPhones. That's why Buffett bought Apple!

So I guess the message is that we better have some exposure to these tech names. Again a good way to do that would be to buy some tech ETFs that would have all these names. Preferably it should also be global in nature so as to capture all the non-US names as well. After doing like 15 min of Google search, I believe the few candidates would be:

Again, I haven't done the deep dive research on these and I don't own any of these at the moment. The history for EMQQ and HACK is also quite short (only 2 years or so). Hence it would also be homework for me to study further and look at better entry if any. Although given that all of them are near all time high, it would be at the backburner in terms of research priority. In fact, these days, there's more selling than buying.

Ok, so that's the lesson for today. Next post we talk about insurance!