A quick recap: Overseas Education (OEL) operates one of the largest international schools in Singapore and was listed on SGX in 2013. The stock has since collapsed below its IPO price due to the three issues discussed previously.

1. It move from Orchard to Pasir Ris, a less prestigious location and lost 20% of its enrolment.

2. Competition has increased with now over 70 international schools in Singapore. 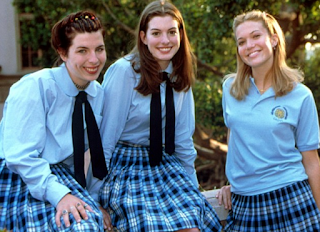 As alluded to in the previous post, these are likely short term issues that would be resolved in a few years. Yes, value investing is a game measured in years. While these issues could persist for say 18 months, it is likely to normalize over years. So for readers looking to play monthly or quarterly games, well, then, this post is not really suitable. Although these same readers would probably not mind ogling at picture of the senior year students provided here. So read on!

Just joking, the above is a pic taken from The Princess Diaries starring Anne Hathaway when she was 18, fifteen years ago. Today, she is more beautiful as Catwoman (shown below) but alas OFS students are even more beautifulier. This hopefully inspires some readers to go kick the tires by doing actual visits to Pasir Ris :) Anyways, back to long term thinking, here's the thing, if we look out in years, not months, enrolment should have bottomed. OFS has managed to grow enrolment steadily for the last 20 odd years. It is likely to keep growing if we are willing to look out a few years. On average, it has experienced net gain of 150-200 students per year over its long history. So hypothetically it should get back to pre-move enrolment of 3,600 in just three or four years. 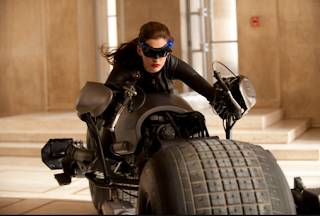 As for competition, while there are c.70 schools in Singapore, the top few schools command high market share with their capacity and brand name. These are the numbers: there are c.40,000 students but the top five schools accounts for c.50% of market share. This means that the remaining 65 schools are not actually competitors as they can hold only a few hundred students each. Simply put, they are barely a tenth or a fifth the size of OFS. In fact quite a few of these schools are struggling to survive. If they do close down, OFS stands to benefit from their transferring students.

The world economy has collapsed in 2015 in the aftermath of China's slowdown, the bursting of the commodity super cycle and the bleak recovery in US and Europe. Global expats are moving back to their home countries and Singapore had its fair share of such woes. Despite this, it was surprise to see that the number of employment pass holders actually jumped from 175,000 in 2013 to 188,000 in 2015, a nice 7% increase over two years. This points to Singapore's continued attractiveness as a global hub for expats to come and work. As long as Singapore remains relevant, the number international students will grow and OFS enrolment should grow over time even though current enrolment is still weak.

Next we move to the financials.

As part of its listing requirement, OEL has produced detailed financial statements since 2010. Again, not to be confused, Overseas Family School or OFS is the name of the school and Overseas Education Limited or OEL is the listed entity. We now have five years of detailed financial statements. Analysis of its profit and loss, balance sheet and cashflow is quite straightforward, given the simplicity of the business model. Here's the cheatsheet: 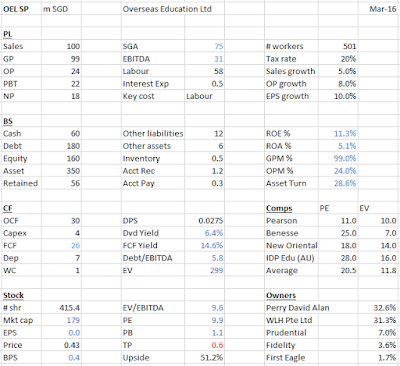 
As usual, this cheatsheet plugs out some of the most important no.s from the three statements and put them in a nice format for easy reference. These are numbers not from any single year but a mixture of estimates and actual figures for better analysis. For example: Sales of SGD 100m is an estimate of what OEL can earn in the next 1-2 years while current year sales is only about SGD 94m. Cash and debt are rounded to the nearest 10m based on last reported numbers.

Numbers in blue are derived from other numbers. We can see that the firm has incredible free cashflow or FCF yield (14.6%), Operating margins (24%) and so-so ROE (11%) but likely to increase as its net income normalizes in the next few years. The P&L is simply revenue minus costs, the largest being labour cost which is 58% of sales. The balance sheet has quite a bit of debt (SGD 180m) as a result of the past borrowings to build the new campus but that should decline over time. Free cashflow turned negative as it poured money into building the new campus but that should also normalize and the firm would likely hit 20-25m FCF per year as it did before it moved from Orchard to Pasir Ris.

As part of the drilling in this post, we look closely at these three numbers described above in detail for this cheatsheet, namely:


OEL employs international school teachers globally and it pays to get quality. As such, labour cost ie teachers' salaries is the highest cost component and would likely continue to be so. The school has established itself as the employer of choice for the global pool of international school teachers. These teachers usually sign three year contracts and depending on the student enrolment trend of the school, some would not be renewed. Conversely, the school also has a list of potential new hires for it to recruit rapidly when enrolment picks up and it needs more educators. While labour cost by and large will keep increasing over time with inflation, the school can offset this by increasing tuition fees. The school currently keeps slightly more teachers that needed given that enrolment just collapsed but that should pick up as discussed previously. Over the next few years, we can expect labour cost as a percentage of sales to drop closer to 50%. In short the firm has some flexibility in managing labour cost and offsetting it.

Next, we discuss the conversion of its debt enterprise value to equity enterprise value. OEL raised its debt significantly in order to build its new campus, resulting in the current situation of SGD 120m in net debt (180m debt - 60m cash). Its Enterprise value (EV) stands at SGD 299m. EV being simply market cap plus net debt (179m + 120m). Now, the enterprise value of the firm shouldn't change if the business is intact. So this means that as the firm generates cash annually to pay down its debt, eventually paying it to zero and attaining a net cash status as it has done so in the past, its EV should equate its market cap. This means that its market cap should jump from current SGD 179m to 299m ie up by 67% over time.

This is only possible if the firm keeps generating cash to pay down its debt. For OEL, well, it seems to work just perfectly alright. The firm is capable of generating SGD 20-25m of free cash flow per year, in fact, in the cheatsheet, it's even higher at 26m. This translates to an incredible 14.6% FCF yield, something as safe as a school rarely trades so cheaply. Even if we assume a more conservative number, say it can only do SGD 15m, it still translates to a decent 8.4% FCF yield and bearing in mind that it would use this 15m to pay down its debt means its market cap would grow by the same quantum per year ie 15m or 8.4% of 179m.

To sum this up, in a pretty bad scenario where things simply remain the same, OEL grows at a high single digit clip. If our thesis is right ie enrolment comes back, on top of the regular tuition fee increases, OEL is on its way to see its previous peak $1.02 (2.5x vs current price) and meanwhile we also get 4% dividend every year while it grows multifolds!