Books #16: The Man Who Solved the Market

The Man Who Solved the Market is one of the best books I have read in 2021. This is the story of Jim Simons, founder of Renaissance Technologies, the world's most successful and most secretive quant fund. Even after the book is published, nobody knows exactly how Renaissance made so much money. The table below from the book says it all. 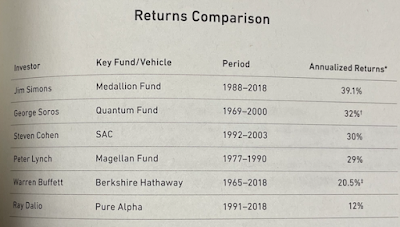 Jim Simons vs all gurus

These no.s are net of fees and the annualized returns before fees are above 50%, which means doubling the capital every 18 months or so. When so much money is being made so fast, it is no wonder the whole Renaissance team doesn't want anyone else to know the secret sauce nor are they interested in sharing.

So we can only speculate how things actually work.

The details are scant. The book shared a couple of facts:

1. You need a lot of data for quant models to work and as such there are thousands of trades implemented at any point. Every trade is analyzed. It took decades before the team perfected their trading wins.

2. Trades at tested using mathematical / quantitative models, looking for correlations and robustness. Trades are based on math theories that may not have anything to do with economics or business fundamentals. Renaissance doesn't look for relevance or explanations.

It works because there are always anomalies that continue because humans are simply not rational. One of the most simple ones are traders and fund managers closing trades at the end of week or month, Renaissance takes advantage of that and reap the small returns by taking the other side. But most of time, according to people quoted in the book, they cannot explain fundamentally why some trades work, but that is okay.

The other revelation is that only slightly more than 50% of the trades are profitable. Although it is not stated in the book, it means that one the most important rule in trading - cutting losses, works. I learnt it while reading about the turtle traders. Their rule: as long as you cut loss at say 2% and let your profits run at double of that i.e. at 4% and above, you can win even if you only win 50% of the time. 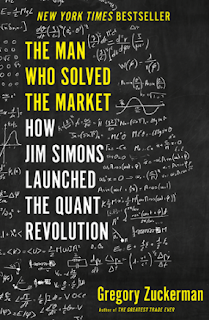 Besides getting the taste of the secret sauce, or rather more of a whiff of smelling it, what is also interesting is how the book weaved the whole history of the financial markets for the general reader. It talked about the turtle traders, the 1987 Oct crash, George Soros vs the Bank of England, LTCM, a few flash crashes caused by quants over the last two decades, needless to mention - the GFC and all the other important financial moments over the last 60-70 years.

That was really just nostalgic for me and perhaps very educational for new students of finance.

It is worth noting that LTCM tried to do what Jim Simons did and blew up. So, in essence, Jim was the successful LTCM and when he succeeded, he stay hidden so that his team can continue to reap the profits from the anomalies. There is some value in maintain secrecy when you do have an edge as exemplified by Renaissance, KFC (Colonel Sanders' secret recipe), Coca Cola and famously in Japan: FANUC, the company that invented the numerical controllers for machine tools and robots.

The last bit of the book talks about how Renaissance employees managed to influence politics. Notably, one of the key staff allegedly supported Trump and got him into the Oval Office using his money and influence. It is a testament that big money is so powerful that it can decide politics and impact our lives.