NeverGrande: Is this China's Lehman Moment?

Last month, we witnessed the fall for Evergrande, the world's most indebted real estate developer, and the subsequent semi-bailout in stealth. While we do not know for sure if the Chinese government did step in, we have to assume so at the moment. Without the government's olive branch, Evergrande could  plunge China into pandemonium as the 80,000 retail investors who had invested in Evergrande rebelled, and the millions of Evergrande's homeowners could cause further unrest, threatening "common prosperity". Evergrande's share price has collapsed 90% since Jul 2020. 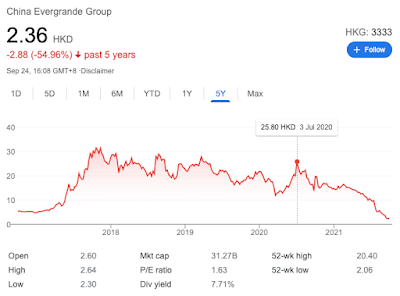 To recap, Evergrande owed USD300bn of debt which was accumulated to fund its crazy built-up of over 1.000 projects across 200 Chinese cities. It was reported that the company pre-sold 1.5m homes to Chinese citizens. Evergrande had always had issues. It just side-stepped them by launching new ventures and borrowing more money. But triggered by the pandemic which has caused disruption in the global supply chain, business workflow and money flow, rumor was that Evergrande would miss its bond payments and this would be the last straw that was going to take everything down.

This was really the last straw.

In summer, the cement, dynamite and sh*t hit the fan (figuratively, of course) and everything blew up. The courts took control of the firm's finances and the Central Bank even issued a rare warning. Losing confidence in Evergrande, workers, home-owners retail investors marched in the company's HQ claiming they were tricked and demanding to have their money back. Employees of the firm were similarly tricked alongside overseas investors and probably stand to lose the most.

Evergrande's fallout then spread to the other developers. Smaller peers have defaulted and impacted bond and stock prices. While not picked up by the media, I am sure many homeowners are affected, losing their life savings. Tragedies abound. The old adage comes to mind: caveat emptor, buyers beware.

The worst is not over. The following table below from FT details the upcoming bond payments. In March and April 2022, there will be USD3.6bn or principal repayment due. If Evergrande or the Chinese government cannot raise the money, we are looking at the next rollercoaster plunge and perhaps China's Lehman Moment (which arguably, started in September when the problem was picked up by global media). 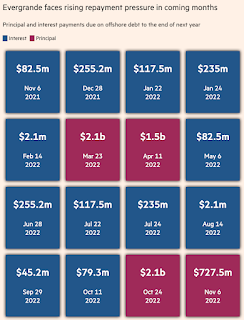 Analysts have long warned about Evergrande. Amongst the big developers, it always stood out with more debt, more aggressive accounting and more issues. As early as 2012, short seller Andrew Left raised issues with Evergrande but was silenced by the Hong Kong authorities at that time. He was charged with market disconduct and banned from trading for five years. His ban is still on today despite his thesis being vindicated!

This is another example of how the global system is pretty broken at times. It reminds me of the how Jho Low got to defraud Malaysia and got away with wiring billions across the world via major US and European global banks, making a fool of the SWIFT system and nobody caught him. He is still at large today. Well, that's the truth, nobody knows sh*t. People who run systems sometimes really have no idea.

So, what can we learn from Evergrande?

I think there are two important lessons, one for investors and one for understanding powers at play. As investors, we have to bolt when we smell trouble. This is a lesson that took me a while to learn because psychology is at work. We hate losing money and loss aversion clouds our minds. I made the same mistakes with Hyflux, Bayer, Sembmarine and so many other stocks which is in the portfolio.

When trouble brews and you have a position, the first thing to do is not wait-and-see. It is to cut loss. There is always a "canary in the coal mine" that died to warn us of danger. We must be vigilant to understand the tell-tale signs and more importantly take action by selling!

The following timeline (courtesy of Reuters) shows how Evergrande's problems were well known. On hindsight, there was an optimal point to sell around Jul 2020 when the stock rebounded with the markets with the pandemic recovery rally. But one would have save some money by selling at any point.

Central bank names Evergrande as one of few financial holding conglomerates on its watch that it said could cause systemic risk.

Regulators meet with 12 major property developers, including Evergrande, to introduce caps for three different debt ratios in a pilot scheme dubbed “the three red lines”. Evergrande sells 28% of its property management unit for $3 billion ahead of the unit’s initial public offering (IPO) in Shenzhen.

Company offers 30% discount on properties for a month to push sales.

Evergrande sells 10% of online real estate and automobile marketplace Fangchebao to 17 investors for $2.10 billion in a pre-IPO deal. It aims to meet all three caps on debt ratios by 2022-end. It plans to list Fangchebao by early next year, and spin off its water and tourism units among others.

Evergrande says it will sell over half of its 58% stake in peer China Calxon Group Co Ltd, worth $386 million. Fitch downgrades Evergrande to ‘B’ from ‘B+’ with a negative outlook. The developer arranges HK$13.6 billion ($1.75 billion) to repay a maturing bond and interest on all other dollar bonds.

A court orders a freeze on a 132 million yuan bank deposit held by Evergrande at the request of China Guangfa Bank Co Ltd. Evergrande says the loan is not due until March and it plans to take legal action.

Some banks in Hong Kong decline to extend new loans to buyers of two of Evergrande’s uncompleted residential projects. Evergrande scraps a special dividend proposal. S&P cuts its credit rating on the company by two notches to B- from B+ with a negative outlook. Fitch downgrades Evergrande to “CCC+” from “B”.

Moody’s downgrades Evergrande’s corporate family rating (CFR) by two notches to “Caa1” from “B2”. Legal sources say lawsuits against Evergrande across the country will be centrally handled by the Guangzhou Intermediate People’s Court.

Hui Ka Yan steps down as chairman of flagship unit Hengda Real Estate Group which Evergrande says is due to the termination of its backdoor listing plan.

Chairman Hui Ka Yan leads a pledge-signing ceremony to promise buyers it will complete construction of their homes. 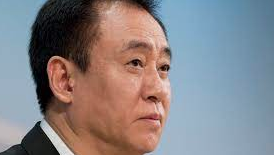 The second lesson is to understand people and powers at play. Undoubtedly, Hui Ka Yan, the still billionaire founder of Evergrande (after losing USD25 billion of his wealth) was a shrewd businessman and wasted no time to curry favor the new Xi's government and disassociate past links as early as 2012 when he dabbled into soccer to help bring China to the world's stage. In 2018, he was on the official list of 100 outstanding entrepreneurs, a recognition of his efforts by the Chinese government. He is also still a member of the Political Consultative Committee that advises the government on policy.

But he was never in the inner circle and could never be in. So when Xi's anti-corruption campaign started and even Jack Ma was brought down, we must understand that a government bailout will always be difficult. This is now made even more difficult with the focus on "common prosperity". With USD11bn in his pocket, he probably has to dough out more to help the 80,000 retail investors and 1.5m homeowners first before his own prosperity becomes common.

A change in dynasty and/or paradigm is always big. It means that what we know hitherto no longer counts. Xi's rising in 2012 was big but it took the world a few years to realize that. The Lehman Moment defined global financial markets for more than a decade. We are still not out of the GFC's shadows. In China today, this focus on "common prosperity" is one huge paradigm shift. As for the next disruption in the financial world, crypto could be one.

Email ThisBlogThis!Share to TwitterShare to FacebookShare to Pinterest
Labels: China