Is This The Beginning Of The End For Singapore?

Yesterday, we saw the results of Singapore's 13th election and the first held without any public rallies due to COVID-19. It was supposed to be a breeze for the ruling party, the handling of the COVID-19 crisis while having small hiccups was largely successful hitherto. The Government dough out huge payouts to Singaporeans during the crisis. That's helicopter money in SG style! And according to past experiences, Singaporeans always wanted strong and safe hands to steer them out of the woods.

Yet, Singaporeans voted the most number of opposition candidates into the Parliament since independence. The ruling party lost the second Group Representation Constituency (GRC) after losing the first one in 2011. The Prime Minister in waiting Mr Heng Swee Keat only managed to secure 53.4% of his East Coast GRC votes. This was a body blow to his East Coast Plan! 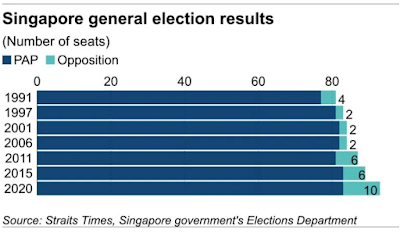 The ruling party, People's Action Party or PAP, has always warned that Singapore cannot afford any mistakes. They are the best steward for this Little Red Dot. They have done it for 50 years and they have the track record. If we screw up, global investors will flee on the first flight out, or the first trading week. We will be doomed. No one owes Singapore a living. We have to make our own. That means not opposing the Gahmen (Singlish for Government).

But is it true?

Perhaps so, until the 2000s. But over the last twenty years, Singapore as elevated its position into one of the top global cities in the world. We have one of the world's most expensive properties and one of the highest standards of living globally. We are often mentioned in the same breathe as London, New York, Hong Kong and Tokyo. Singaporeans travel all over the world, see other cities and know this.

Our first few generations of leaders brought us here, kudos to them.

Our properties prices has risen on the back our status elevation and global quantitative easing (QE) by the large central banks. QE has also been elevated to another unprecedented level in the name of fighting COVID-19. Central bankers simply printed money and shoved it down people's chimneys. This is also called helicopter money.

As such, Sky Habitat did not fall from $1,700psf despite my quadrilogy rambling seven years ago. Prices remained sky high as we became the global playground for the rich and famous. We may never see property prices falling, PAP or not. Well's that is barring a super major screw-up if the Opposition takes over, which is hard to imagine.  Hey, Worker's Party MPs also own properties right? So in short, Singapore property prices will continue to go up, as with Hong Kong and the other major cities. In fact, if Hong Kong properties are not falling, then Singapore should be even safer.

But what about stocks? Businesses? Foreign direct investments? Startups? 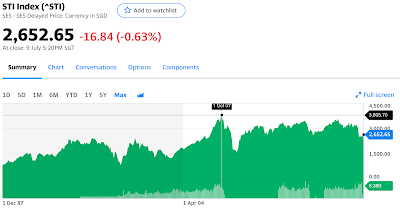 
Well the Straits Times Index (STI) has plateaued since the mid 1990s and peaked in 2007. We have not been able to break 3,800 since then. This has to do with our inherent strength as a young island-city nation. In the 1990s, the STI was driven by our SOEs: Singtel, SIA, DBS, Keppel and the likes. As our economy grew, they did well. They became big enough to go acquire other companies in the region. But that was that. Our market today is still dominated by these companies. There are no large home-grown listed companies run by Singapore entrepreneurs.

Okay, there's probably one or two lah. Like Wilmar, part of the Robert Kuok Group, but the man Robert Kuok himself is more Malaysian than Singaporean. Then there is Thai Bev and Top Glove but these are also not started by Singaporean entrepreneurs. Going further down the market cap list, we have Olam (started by an Indian born in India) and Venture (both not in the chart below though). So perhaps today, it is Venture, our truly homegrown listed company run by a Singaporean entrepreneur.

There was also Creative, but it is way down the list today at just SGD200+m in market cap. There are a few that went delisted or never bothered to list, like our Popian King. But the moral of the story for the STI is this - we produce a dearth of entrepreneurs because of our Gahmen policies which include education, trade, foreign investments, public service affected everything including our talent pool's career paths, our business mix etc that resulted in the lack of entrepreneurs. 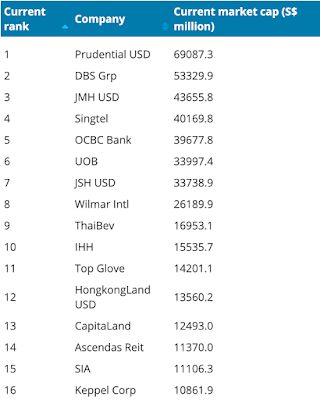 
So the stock market is not likely to go ballistic from here. I don't think the Worker's Party will make it worse. Neither can the PAP make it better. It is probably gonna be status quo and global investors know this. We do have to continue to do well with foreign direct investments and drive the economy by attracting global talent and tourism. That way, our local businesses can thrive. The Opposition, or maybe the PAP itself, might screw things up here. We may not like it but we have to continue to grow to 8-10 million people. That is the city's evolutionary path, any city's evolutionary path.

What's the point if a city cannot grow? Let alone a city-nation without hinterland.

In the longer term future, we do have to do something with our education. We have discussed education here some time back. Our pressure cooker education system can produce exam smart students but they are not ready for the future. Our students can only score in exams. If they cannot talk well, cannot program and lack EQ, how do they fight children from the US, China and India? How to compete with A.I.? We need innovative students with more entrepreneurial spirit. Did the Sengkang parents bite on this issue and reject PAP? Maybe so. It is truly an important issue. Of course, the Government knows this. We have time to improve. Hopefully we can.

So in short, no. This is not the beginning of the end for Singapore.

Our property market has the biggest tailwind behind its back called global QE. Neither WP nor PSP can stop it. Property prices will continue to go up. Even properties in Sengkang. Our stock market has plateaued and will stay so unless we make some radical improvement. We can do this by producing more entrepreneurs, and we need to fix our education system to do that. It is imperative we evolve and do that.