Eight years ago, we discussed Hyflux perpetual bonds here, putting forward the investment thesis that 6% was good dividend/interest income and how Hyflux had a so-so business model but things should be okay because the Singapore government would support Hyflux as they had done so in the past. That turned out to be a huge mistake. Not only did the government not support Hyflux, she rubbed it in, pushed the proverbial dagger into Hyflux's belly, delivering the fatal blow.

How did things come to such a dire situation?

As described in the post eight years ago, Hyflux's business model relied on winning water projects, which meant that they had no control over the bidding price and also, in subsequent years, their own future revenue. However, as with most Singapore co.s, we are good at managing costs, which allowed us to beat many others in the global game of winning EPC (Engineering, Procurement, Construction) contracts. This was how Keppel and Sembcorp became so good in oil rigs.

But in order to grow, companies in the EPC field have to bid for bigger and bigger projects. The cost management however gets more and more complex. Once every decade also, someone would definitely screw up and one or two badly designed contract put EPC firms at risk of bankruptcy. Alas, Hyflux was not spared. 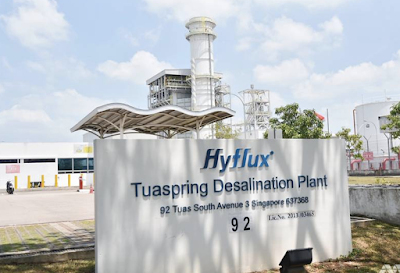 
The irony for Hyflux was that the contract turned out to be one in its home country. This was infamous Tuaspring desalination project. Tuaspring became a bomb because of its large scale and complexity. The Achilles' heel in Tuaspring is actually not desalination but power generation. For reasons unclear to me now, someone thought it's a good idea to combine the two. Maybe because desalination requires a lot of power, so hey why not generate power, then sell some power plus water to PUB as well. This definitely developed as the logical train of thought from our admin officers in the civil service and Hyflux went along.

But selling power is not the same as selling water. Cost for selling power depends on fossil fuel, the most important being crude oil, which is notoriously volatile. Meanwhile, power prices in Singapore collapsed as a result of energy deregulation. So suddenly, Hyflux found itself caught in a situation where its power generation cost exceeded its revenue. With a billion dollar debt on its balance sheet, things quickly spiralled downhill. Our admin officers don't give chance these days, just like the new Certis Cisco summon officers.

Hyflux began to run out of options as credit dries up and in an "unthinkable" scenario for investors who put in money in 2001 during its IPO to yield chasers (like me) who bidded to buy its perps in 2011 and more yield chasers who bought its perps again in 2016, Hyflux declared it might go bankrupt. A white knight from Indonesia (Salim group) appeared, willing to put money to save the firm but not the perp bondholders. Alas, that hope is now also gone as PUB decided to push the dagger some more (figuratively impaling Hyflux now), terminating Tuaspring water purchase agreement. 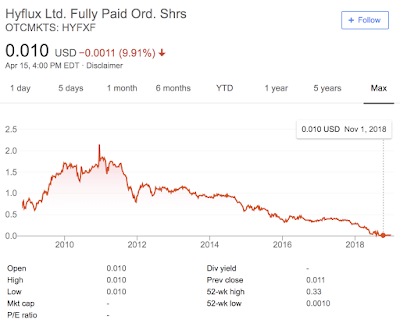 As things stand, it is likely that bondholders and shareholders will get nothing in the end, barring some kind of miracle. It's neither Oliver Lum's nor PUB's fault. This is just investing. There's always risk. Perils on top of perils. Caveat Emptor.

The saving grace for those of us who invested in 2011 though was that we got a few years of 6% coupon. Not great, as the total loss of capital was still north of 60%. But almost everything is now bridge under the water. So this post serves to help us learn the lessons and move on. Well, it's mostly re-emphasizing the importance of what we already know:

1. Always limit our risk capital to any single name to an amount that we would be okay it if goes to zero. This could be an absolute amount and it could be a percentage of total net worth. What's important is that we can sleep at night. We hear stories of people who put in $200,000 or $300,000 into Hyflux perps and that's a huge chunk of their retirement nest egg or net worth. It's just so sad. So don't make this mistake.


2. Map out the scenarios and probabilities well and keep monitoring them. When we did the due diligence in 2011, we determined that the business model was flawed, one project could kill them. But we also thought that the Singapore government should come and bail them out. After all, this was Singapore's poster child. Little did we expect it would be the opposite! The project was in Singapore and the government delivered the fatal blow! Nobody could have foreseen this. But, on hindsight, we should have put in a scenario that Hyflux would go bust and ascribed a probability. In the next post, we should delve into this!