In the last post, we discussed how we should focus on the big picture and pull the big levers to move things. In diet, it's about cutting meals and cutting meat and putting in the hours in the gym or hit the road running 20 km per week. In investing it's about understanding business models and putting in the hours reading annual reports. Needless to say, investing is also about margin of safety - the biggest lever, the most important concept.

We are really fortunately to be living in the 21st century in the developed world as food is never a problem. We can pretty much eat whatever we want, wherever we want. Our issue is having too many meals. The breakthrough concept should be this: we have 21 meals per week, how many meals should be a treat? Seven? One per day or maybe, for some, every meal? The idea is to know that we will always have enough opportunities to eat whatever we want, wherever we want. Hence, in my opinion, a treat should be once a week or even less. If possible we should eat very little for every dinner because our bodies are winding down for the day and not ready to do heavy duty digestion. 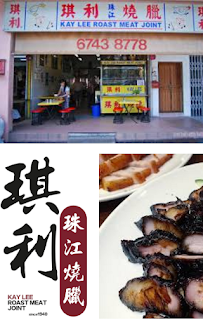 During the recent long weekend, I had to attend various parties and ate more than my fair share of food as these were "occasions". We just had to eat, because food is love. The next moment, I saw my weight jump and my body spent all its energy digesting Kay Lee Roast Duck (now owned by SGX listed Aztech), BBQ chicken wings, Indian curry and Ba Kut Teh amongst various food. They were all good! But it really took out my sustainable routine of managing my weight.

Sustainability is truly under-rated. It is way more difficult than most would like to think. My sustainable regime was supposedly light dinner at least 5 times per week, exercise at least 2 times per week. This was thrown out over the long weekend and it took weeks to get back. A famous musician once said, "if I didn't practise for a day, I know it. For two days, my wife knows it and for three days, the whole world knows it." It takes great effort to sustain simple things. But once achieved, then anything is possible. Like waking up 5am every morning for ten years to swim bags an Olympic Gold.

In investing, sustainability manifest itself in a similar fashion. I would like to illustrate this with companies' return on investing capital or ROIC in short. We all love hyped up stories of high ROICs bcos these justify super high PEs and super high stock prices. But the real question is, are they sustainable? Let's look at the famous tech stocks of recent days past, Linked In, Twitter, Fitbit, Alibaba and Facebook. All of them started with high ROICs in the days of their listing. Alibaba had 200% ROIC but had since collapse to 18% (still not bad). Meanwhile Linked In, Twitter and Fitbit all saw their high ROICs turned negative in a span of a few quarters. Only Facebook had managed to maintain a very high ROIC over 30% (peak was 80% though) although we could say it's history is still short compared to brick-and-mortar firms with truly sustainable high ROICs. 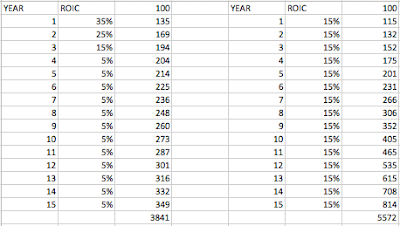 Let's delve deeper in this. The chart above shows two hypothetical companies. The one on the left has a high ROIC of 35% to begin with but subsequently falters off to 5% (still positive) by Year 4 while the one of the right simply managed a sustainable 15% ROIC (which is what great co.s like Colgate or Diageo can do) forever. At the end of 15 years, which is the investment horizon that most should think about (not 15 months), we can see how the accumulated returns compare. The one that started with 35% only earned $3,841 with a starting equity of $100 while the other had $5,572 which is c.50% higher.


In fact, the sustainable ROIC firm would generate more returns after the 9th year. Yes it will still take 9 years but this is how investors should be thinking. We cannot be chasing unsustainably high ROICs every year and hoping to run out in time and catch the next one. It's too tiring. Chances are, we won't run fast enough. How many investors in Fitbit, Linked In and Twitter would have managed to get out in time before these stocks collapse 30-50%? 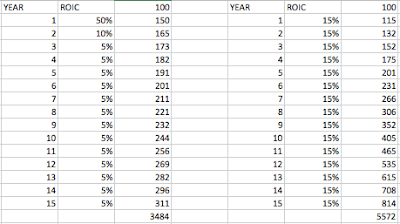 Next we look at another example. This time we have a 50% ROIC vs again a 15% sustainable ROIC. This one would look more like our Twitters and Fitbits. But as high as a 50% or 100% ROIC, we should imagine that the collapse would also be fast and furious. In the example, we would model its ROIC to fall to 10% in Year 2 and then 5% in Year 3. To give the hypothetical firm the benefit of the doubt, let's assume that it doesn't turn negative (which is not true in reality given that Linked In, Twitter, Fitbit all turned negative). At the end of 15 years, we see a similar pattern. The sustainable company would have accumulated c.50% more equity vs the once 50% ROIC firm.

Again if we look at the time frame when the sustainable firm earns more, it's even shorter than the previous example. By the 7th year, the 15% sustainable ROIC firm would have made more returns. Of course, all these are just hypothetical. In reality, these numbers are generated by hundreds and thousands of workers doing their jobs well. As such, it is already a feat to sustain 15% ROIC. Most firms would only be able to manage a mid to high single ROIC. That's because basic economic theory tells us that competition competes away excess returns as soon as possible. Just imagine, if we know some business can make 15% easily, wouldn't we all be in it? Hence 5% ROIC should be the norm. People who argue that 50% or 35% ROIC is sustainable likely don't know what they are talking about. Yes, there might be a handful of maverick firms globally that might do 35% sustainable ROIC, but we cannot assume the one we invested in would be the one.

Likewise, 15% ROIC for 15 years would be feats only achievable by moat companies. Moat companies have unique characteristics that help keep competition at bay, like brand, scale, eco-system, businesses with recurring revenue etc. Hence they are capable of generating and sustaining high returns. These are your P&G, Unilever, Colgate amongst others. In Singapore, sadly, it's even more rare. SIA Engineering managed to do 16% years ago but its ROIC had since dropped to 7% partly as a result of its large cash holdings. Singtel had managed a 12% ROIC for the last five years.


It is the constant and continuous effort that makes the difference. Just as I found out how difficult it was to keep a simple cut dinner and exercise regime, just as the new buyers of Kay Lee roast joint found it hard to sustain and even expand a 70 year old household brand to a regional franchise, the sustainably high ROICs of some of the best global businesses should be revered. Thinking big and sustaining the effort to make it happen, that's the secret to success in investing and perhaps everything else in life.