Health and Wellness: A Secular Trend

As a semi follow-up to the previous post, let's expand on the health and wellness theme that was discussed. There are two key factors to health and wellness: diet and sports. Ideas for diet would be about nutrition. Stocks could be Nestle, GNC (the supplement company) or maybe Danone. But in this post we focus on the second factor: sports. Or more specifically, sportswear including sports shoes.

To illustrate an important point about sports related industries, the following two charts on bicycles tells a good tale. As we know, cycling has become really big globally with major bike events and more and more enthusiasts joining this sport. It's enjoyable while giving our bodies good workouts but most importantly it's another way to show status. The bike, which can cost five figures, the attire, the tours, all adds to the glam surrounding cycling. It has all the right ingredients and is perhaps the good showcase for most health and wellness stock ideas.

The charts below depict the trends on Taiwanese bicycle exports. Yes, Taiwanese bikes are now the best in the world. The top chart shows unit prices in dollars and the bottom shows the total export value. As we can see, average unit prices had gone from $100 to almost $500 and in value terms, the industry grew 3x in the span of 15 years. Sports cycling as with jogging or other competitive sports is an industry where manufacturers have a lot of pricing power. This is a result of good marketing, constant innovation, as well as consumer mentality in paying up for performance and value. It's good business.

Prices only go up in sports!

Sportswear and shoes is a similar secular growth sub-industry having being shaped by the two giants, Nike and Adidas, over the decades to be oligopolistic and hence all the more capable of maintaining and raising prices by providing innovation and value add to the consumers. Consumers are willing to pay because they see tangible benefits. Well, actually there's both tangible and intangible benefits. For tangible benefits, running and basketball shoes would be the most obvious examples. Almost everyone would pay up for a better pair of shoes given that poor quality ones simply dis-integrate after a few uses. Bad shoes result in pain or sometimes even injuries. So who wouldn't pay up for Air Jordan or Adidas Ultra Boost for marathons? Well, as for intangible benefits, as teenagers and twenty-somethings, shoes and sportswear became bragging rights. Air Jordan was just a must-have for all basketballers! Right?

To further prove the point, the following chart shows the long term share price of Nike stretching back to 1981 (Adidas chart looks the same as well). We can see how this phenomenal firm had just compounded value over time and should continue to do so. In fact, the no.s are too small to be read from the chart. So let's put them in words here. In 1981, adjusted for splits, the stock was trading in the cents, like 10 cents. In 2000, after the dotcom bust, it was a few dollars, like $4. Today, Nike is trading at $51 with a market cap of USD 86bn! In other words, putting $1,000 in Nike in 1981 would be worth $510,000 today! Nike, as a stock idea, is simply a no-brainer. Just buy when the stock falls. At 4% FCF yield today, it's not too bad, but if we want a bit more margin of safety, maybe we should target closer to 5% FCF yield i.e. enter closer to $42. If it ever gets there, we should just close our eyes and buy this winner.

What is more interesting might be another up and coming competitor - Under Armour or UA in short. Under Armour has taken the world by storm in the last few years as an alternative to the two giants. People like its logo, the cool apparel designs and its new challenger status. Especially for the millennials, Nike and Adidas were what my parents wore, I wear Under Armour. Then their parents also started wearing UA. The firm's revenue went from USD 100m in 2003 to close to USD 5bn today. A 50x increase though still 1/6 of Nike's whopping USD 33bn annual sales. It did all the right things, going into the different verticals like basketball, running, cross-training and trying on golf and soccer. It seeks endorsements from athletes and celebrities and now boasts a cool list from Stephen Curry to Andy Murray to Dwayne Johnson a.k.a The Rock. Essentially following the playbook that Nike and Adidas had written in the 1980s and the 1990s.

What's more, it had also appealed to the girls with feminine designs, taking on Lululemon Athletica and winning. Lululemon is less than half of Under Armour in sales and seemed more about sexiness than sports. UA did not start with a niche like yoga and hence had a broader base and the financial power to expand rapidly across regions and categories. Not to mention that getting sponsors need money, a lot of money. Especially when UA likes to get a whole slew of femme fatale sportswomen and fashion models.

In fact the reason why it dropped so much and gotten interesting it's bcos it spent too much money and the markets got worried. Share price collapsed from a high of $45 earlier last year to $25 today. This is yet another example of unpredictability. If analysts were asked to guess early in 2016, who could have known that the all powerful Under Armour would fall 40%?

Well in order to take on the two giants (Nike and Adidas), UA went on a crazy capex spree, spending over $800m in the last three years. Not just on new stores but also on R&D and more endorsements. Again, take a good look at the top female athletes and models in the world above that UA found to help further boost its popularity with women, something that Nike and Adidas had not been as strong. Its stable of female spokepersons include Lindsey Vonn, Gisele Bundchen and Kelley O'Hara, all eye candies, definitely didn't come cheap. That's the game. Pay up and pay more so that the competition just falls off! UA is just taking the Nike, Adidas sponsorship game to another level.

Lindsey Vonn, the beautiful skiier, is especially motivational given her trial and tribulations with injuries and sacrifices. She started training at 7 and debut in the Winter Olympics at 17 in 2002 with high hopes but did not win any medals as with Olympic debut since it's more just for experience. In 2006, she crashed during practice and was heli-evacuated but came back after just two days to compete, finishing 8th. She won a Olympic Spirit Award for her grit. In 2010, She finally got her first Olympic medal, deservedly a gold, after 18 long years. Our Joseph Schooling suddenly seemed so fortunate yah? Under Armour's commercial pitch was just about making it into awesome story-telling. Here's her poster from UA: I will not be underestimated. Damn, so cool! 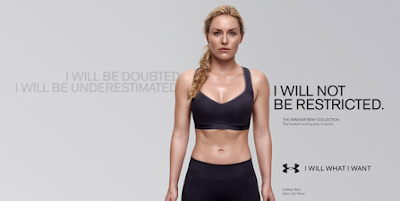 Lindsey Vonn, world champion skiier
Under Armour's own story is also quite inspiring. It was founded in 1996 by its current CEO who was an American football player himself. He noticed how synthetic fiber was superior as he wore them while playing. At 23, he started his business selling sports apparel made from synthetic fiber in the trunk of his car. He first targeted performance apparel for American footballers in schools, then branched out to baseball and finally mass consumers. Today, UA makes shoes, caps, socks as well as performance apparel for athletes and laypeople from youth to professionals. 47% of its customers are female and over 36% are college graduates who like to spend and can and will spend a lot to look good and feel good.

That's Under Armour. If it continues to grow, the stock shouldn't be at $25. It's market cap is currently a mere USD 12bn vs Nike at USD 86bn. Given that the industry would continue to grow and UA should grow faster, we can expect UA to be more like half of Nike at some point in the future (say five years). Okay at least 1/3 perhaps. Regardless whether it's 1/3 or 1/2, this would mean that UA market cap should be closer to at least 33% of Nike's i.e. at c.USD 28bn  (more than 100% upside) and that's assuming Nike stops growing which won't happen. So UA would be worth even more.

Some might argue that's too optimistic. Let's use a different lens.

Looking at its own FCF, UA had not achieved stability as yet given its huge capex needs. In good years, it managed USD 100-200m of FCF but in others, it burned cash. However if its growth materializes, revenue should hit 10bn (slightly less than 1/3 of Nike's), NP should hit 600-800m and FCF should then stabilize at a tad lower at 500-700m, which means that we are getting c.5% FCF yield at today's market cap. Again, it's not unreasonable valuations.


Well, having said all that, a thorough analysis of UA is warranted to make the numbers more concrete. And the risk that UA falters like the rest of the tier two sports brands remains real. Some tier two brands remain tier two forever because they simply cannot compete with Nike and Adidas. In US, we have New Balance, Sketchers, in Japan we have Asics and Mizuno and China... Remember China and all its hype about Li Ning and Anda? It's definitely safer to bet with Nike or Adidas. UA is more about higher risk higher return! There would be a limit to its downside though because if UA gets too cheap, someone would just buy it out.

This author doesn't own UA yet.