This is the continuation of the previous post on Vietnam Property.


We have established the following in the last post:

1. Vietnam has a huge and hungry population and is on the growth trajectory to be a developed country. GDP will continue grow at high single digit and property prices at a multiple of that over time. It might be the last Asian Tiger in our lifetimes.

2. The development of the Ho Chi Minh City (HCMC), mirrors the development of Shanghai. With the east of the city growing much faster: the analogy of Pudong and Puxi vs HCMC's District 2 and District 1. At current $2,000 psm, we can expect prices to see $10,000 psm in the future when HCMC becomes like Shanghai or Bangkok.

One big secular trend behind this is also the urbanization of Vietnam. As a country develops, its population moves from the rural farmlands to urban cities. Urbanization ratio over time climbs over 50% to reach 60-70% eventually. Vietnam today is at 34%. As we already know, Vietnam has a population of 94 million of which only a mere 8 million lives in HCMC (another 7.5m in Hanoi). As the country urbanizes we can expect HCMC population to explode. Most big cities in the world houses 15-20 million people when we include the sub-urban population, HCMC should see its population increase at least 50% over the next 5-10 years. 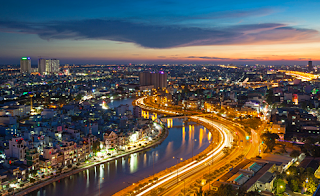 
This is a major point because it debunks the over-supply argument. Most amateur investors would point to the enormous number of property development in the two big cities and say that over supply would come and prices would collapse. But when we think about how 5 million or even 10 million people would eventually find homes in HCMC, or for that matter Hanoi, over supply would never be an issue over a long enough time frame. Besides we are investing in the Central Business District or CBD, the core of the city where land will be limited. It is too easy to paint a bear story without seeing the big picture.

Today, Vietnam is at an inflexion point. It's GDP per capita has almost doubled from $1,300 in 2010 to $2,200 today (chart below) and is likely to hit the all important $3,000 in a few years where the demand for cars, properties and modern goods takes off. The Vietnamese government relaxed regulations and allowed foreigners to own properties in 2015 and started to privatize many state own enterprises in 2016. These are all important milestones for growth. We can pretty much say that Vietnam is all out to transform from a developing to a developed country. 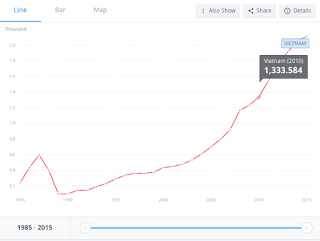 If history is any guide, Vietnam would continue to grow its GDP at a high single digit, not unlike China in the 1990s and 2000s and its GDP per capita would reach $10,000 to 15,000 in time. The same chart above shows how it has grown steadily over the years but still at a low $1,300 which is lower than Indonesia, South East Asia's largest economy at $3,500 GDP per capita and Philippines, another rising star at $2,800 GDP per capita. The difference is that Vietnam is going to be another manufacturing hub, from shoes, to white goods to electronics. The formula that has proven to work as we saw how South Korea, Taiwan and needless to say China transformed their economies that way.

Coupled with the reasons hitherto, Vietnam stands to prosper and Ho Chi Minh City, being the commercial centre, stands to benefit the most. There is an estimated five or six new condominium developments coming on-stream in the next 1-2 years that are targeting foreigners. The HCMC property market is finally recovering after its huge decline as it was dragged down by the Global Financial Crisis (GFC). The Singapore developers already has some successes with a few earlier project launches, building on Singapore's brand name and property development prowess. One of the prominent project in District 2 called The Nassim launched by the Jardine Group targeting the luxury segment had done really well (more than 90% sold) and is set to redefine HCMC's luxury segment with potential for astronomical price increase. 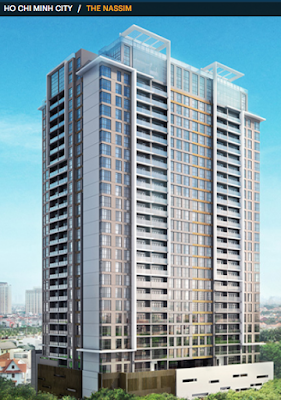 The cherry on the cake is the affordability as a result of the low quantum of these projects. The Nassim, is going for c.$200,000-400,000 per unit and for the less luxurious projects, a state-of-the-art 90 square metre condominium can be bought for c.$150,000 - a quantum that can't even buy a 2 litre car in Singapore. Such is the irony of life. This is the function of Vietnam still being a frontier market and perhaps a reflection that everything in Singapore is really too expensive.

Well, if the story is so good, why isn't everything sold out?

As described before, there's always risk. Nothing is certain in investing and the future, though painted here as rosy and prosperous, is always but "one of the probably futures". The future is a set of probabilities. There isn't just one but many possible futures. When pundits predict one future and it turns out to be correct, more often than not, it's just luck. The true expert, points out all the possible futures and assign accurate probabilities, knowing that one of them would come true and how to bet in a win-win manner. The high probability future of Vietnam is that it succeeds as another Asian tiger and we get our 5 bagger. There is always another chance that it would falter. The government reforms could fail and the Vietnamese Dong collapses again and the story is pushed out for another decade. Or infighting in the Communist party resulting in some power struggle and the politics is thrown into disarray. If these futures pan out, unfortunately, the money put in would see substantial losses. The author would attribute a 10-20% chance of this happening. But still, the risk reward profile is highly favourable. It's 5 bagger vs losing say 30% of the capital. More likely than not though, investors won't lose their pants. There is always a buyer to sell to if the price is low enough.

The other major concern for investors at this juncture is actually financing. Because the Vietnamese economy only started to open up, there is actually no means of financing. There is no such thing as a mortgage in Vietnam today. The mortgage market is non-existent and the banks don't know how to do it. This is the state of affairs in frontier economies. However over time we can expect the Vietnamese banks to introduce mortgages and future investors would have it easier. Without mortgage or financing means, investors must put in 100% of the cash needed and be subjected to full currency risk. The Vietnamese Dong is ultimately an emerging market currency, the exchange rate is volatile and the bid-ask spread is very wide. These are the costs to investing. Although if the story pans out as we have discussed, then such trivial should be overlooked. Why think about a 3% spread or a 10% currency depreciation when the return is going to be 500%?

The other risk is the possibility of intermittent rental income.


As alluded to in the previous paragraphs, Vietnam is only starting to open up very recently. There is no concept of mortgage yet. Global manufacturing firms only started to setup shop 1-2 years ago. The rental market is only for expats working with the global firms. Most Vietnamese people are still living in villages and couldn't afford rental. The rich and famous Vietnamese are actually fellow investors in these luxury properties and they are not about to rent. They just buy properties when they need to stay in the city. Hence while the rental yield is touted to be a good 6-8%, actual rental would be a function of how good the property agents are, whether they can secure good tenants working for MNCs. The rental market is thus highly competitive given the new capacity for these luxury condos coming in the next 1-2 years.

Nevertheless, if the main scenario pans out, then the return should be in the tune of a few hundred percent and missing one or two years of rental yield of 6-8% shouldn't move the needle too much. To reiterate, this is a five bagger story. Vietnamese properties in Ho Chi Minh today sells at $2000 psm but should reach $10,000 psm which is closer to what global cities like Shanghai, Taipei and Bangkok is selling at. Such opportunities don't come often.

Read from the first post! This author owns a property in HCMC.

We have started a paid subscription at 8percentpa.substack.com.

We hope to share profitable investment ideas and our differentiated views on valuations and the markets.

We will publish one investment idea per month. Join us and huat together!