Hong Kong and China has matured as stock markets over the last 20 years. In 2005, Jim Rogers famously said that the 21st Century belongs to Asia and China, especially, which was awakening to capitalism after years of structural reform. The big beneficiary was the Hong Kong's capital markets. Shortly after, China went ahead to drive the commodities supercycle, became the world's largest exporter and now on its way to become the world's largest consumer market. Yes, we will continue to see the growth of China.

This is the first list of interesting HK and China names and we see the corollary from the preamble above. Anhui Couch, China's second largest cement company and China Resources Cement were the Chinese companies that drove the commodities boom. Alongside was Zoomlion, the excavator manufacturer, helping to build up China's infrastructure over the last decade. Qingdao Port, an execution arm of China's export capabilities and Haitian, one of the plastic injection mold companies benefiting from the export trend. Then we have a bunch of consumer companies like Want Want and Uni-President which will be compounding growth in the years ahead. 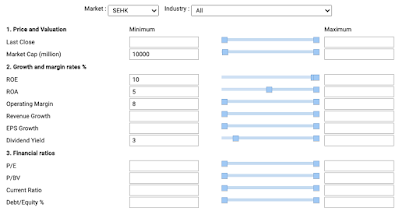 The criteria are similar to the Singapore list generated a few weeks ago whereby ROA and ROE drives the screener. The first part of the list shown here cuts off at market cap of HKD 35 billion (c.USD 5 billion) which is good. We do not like companies with small market caps as it's just risky. Remember Singapore only has less than 30 companies with more than USD 5 billion in market cap. That said, if we have done good analysis and are confident that they won't go belly up, it is okay to buy small caps. Those are the names that can give 10x returns (except Hyflux, which was USD 1 billion when it went belly-up).

If I were to pick one name from this list, it would be Want Want. We know that snacks are irresistible, the market will grow at high single digit and Want Want has the track record to keep growing. The metrics look pretty good too. ROE at 24% and ROA at 12% and operating margins are over 20%. Most importantly, the stock is not expensive at teens PE. However, the screen is always just the starting point. We must do more work. The stock price has collapsed from its peak and not moved for a couple of years. We need to find out why.

That's what screens are about. We use screens for a first cut and then do the deep dive. It is hard work!