The threats from cyberattack looms large. Cost of cyberattacks is going into the trillions. 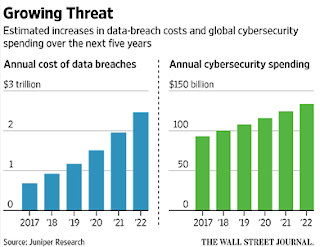 Here's an older chart stating the no.s of attacks per year. We should be much higher today. 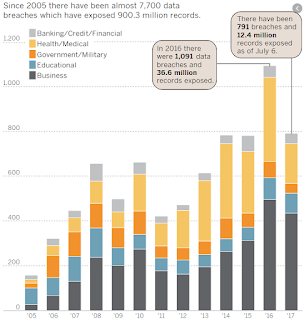 Cybersecurity will be one big theme in our lives. Buy HACK ETF listed in the US!

PS: just to complete the picture, Singtel, our beloved telco made a push into cybersecurity some years ago. Here's an old article from ST (5 Dec 2018).

SINGAPORE - The Singtel Group has consolidated its cyber security assets and resources under the Trustwave brand, it said on Wednesday (Dec 5), in a move that brings together resources from other arms such as Australia's Optus, and information and communications technology unit NCS.
With the consolidation, Chicago-based Trustwave now numbers among its headcount the group's 2,000 cyber security employees worldwide. The resource-pooling also brings into the fold the Singtel Cyber Security Institute, a 10,000 square foot facility that opened in Singapore in 2016. The revamp comes with a new logo and a new corporate website for Trustwave.
Mr Arthur Wong - Singtel's chief executive for global cyber security and also the chief executive officer of Trustwave - said in a media statement that the group will be "uniting the security assets and deep expertise of Singtel, Optus, Trustwave and NCS under one brand and single vision - what we call the new Trustwave".
Singtel bought 98 per cent of Trustwave in 2015 for US$770 million (S$1.1 billion), excluding net debt, after working capital and other adjustments. It picked up the rest for US$12 million in May this year. Singtel most recently grew its cyber security portfolio with an A$23.3 million (S$23.3 million) deal for Australian consultancy Hivint in October.
It said at the time that Hivint's services would be integrated with Trustwave's offerings in Australia and the Asia-Pacific. Singapore's larger telcos have been bolstering their expansion into cyber security, especially as their consumer businesses come under pressure from increasing competition.
StarHub made the news in September when it set up a joint venture (JV) with Singapore investment company Temasek to set up the pure-play Ensign InfoSecurity. StarHub, which has a 40 per cent stake in the JV, merged its Accel Systems & Technologies subsidiary with Quann, which Temasek owned through security services provider Certis.
It agreed to buy Accel in several phases in 2017, with a price tag that could go up to $45.6 million. Later that year, StarHub went on to beef up its cyber security business with a deal to buy homegrown cryptography firm D'Crypt for as much as $122 million. Join ST's Telegram channel here and get the latest breaking