3M (ticker MMM) is a stock that I have looked at ten years ago right after the financial crisis but never gotten to buy. This is one of the biggest opportunities missed. The share price at that time hovered around $80 to $90 but collapsed below $60 after Lehman Brothers went down. It was trading at 10x PER and looked really interesting. However, with the state of the global financial system at its brink and this blogger could not muster the courage to buy the stock.

Since then 3M went on to quadruple its share price hitting $240 at its peak back in 2017. It has since fallen to $170 on the back of the trade war in 2019. At the start of the year, Trump and Xi secured an initial deal to reverse the trade war which helped global markets but little did we expect the Wuhan virus outbreak to hit us. The stock fell further to $158 last week. When the dust settles, it might be a good opportunity to finally own a piece of this spectacular company. The chart below tells its history nicely. 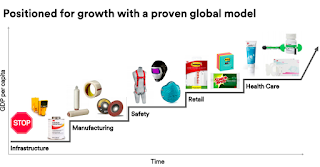 3M was founded in 1902 as Minnesota Mining and Manufacturing company but has since evolved into a diversified industrial conglomerate with unique businesses. The chart above showed how it started as a maker of infrastructure supplies and subsequently branched into industrial, manufacturing and safety products. Some of these early businesses are still supporting its earnings today. It has built strong branding in specific industries, allowing the firm to charge higher pricing vs its competitors.

Today, the firm is focusing on retail and healthcare where its innovative prowess has helped created differentiated products from Post-It Notes to 3M N95 masks to waterproof band-aids for intensive wound care. 3M takes pride in its culture of creativity and has created one of the most conducive corporate environment to nurture innovation. Numerous case studies had been done to figure out how 3M continued to be an innovative company for 100 years.

3M's secret to unleash people's creativity was deceptively simple. It was to empower its employees and giving them freedom to create products as they wished. 3M was also a master at organizing people. Human organizations eventually get too complexed over time and 3M consciously keep its working groups small, making sure that politics and people issues are kept minimal. It is said that humans cannot have deep relationships with more than 150 people in their lifetimes and 3M had adhered to this logic. Without politics and empowering people to do what they want, creativity flourishes. In my view, this is 3M's secret sauce.

Today 3M is investing in new priorities and growth platforms as shown above. Some of these are really top global concerns: air quality, food safety, grid modernization. Business opportunities are abundant and 3M is ideally positioned to capture them. Together with its anchors in its core businesses today, 3M's foray into these areas would bring about the next phase of growth.

3M's ability to harness innovation is further strengthened because of its financial savviness. The company intrinsically understands the importance of growth, free cash flow, return on invested capital and margins. 3M's focus on ROIC and FCF are the tenets of good companies. This is evidenced by its consistently high ROIC (above 20%) and strong FCF (c.USD 5bn per year) over the last five years. 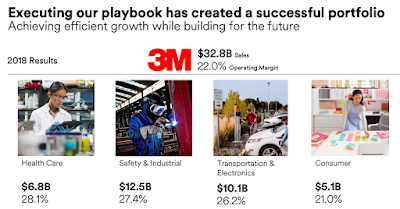 3M organizes itself into four segments: Health Care, Safety & Industrial, Transportation & Electronics and Consumer. All four segments boasts margins above 20% with Health Care leading the pack at 28% for 2018. These high margins are very sustainable on the back of its strong branding, innovation and economies of scale in some of the niches that the firm competes in. In the next post, we shall delve into some of its strengths here and discuss both valuations and risks.

Email ThisBlogThis!Share to TwitterShare to FacebookShare to Pinterest
Labels: 3M