I just read the seminar work of Richard Dawkins, The Selfish Gene. I would say this is a must-read for everyone. Not just investors, but everyone. Amazingly, this book was listed as the most influential science book of all time in a poll to celebrate the 30th anniversary of the Royal Society Science Book Prize. To think that it was published in 1976 and I only read it now.

This book put forth so many concepts that it's actually quite daunting to absorb everything. Hence this post serves to really crystallize some the important ideas. Interesting, Dawkins also coined the word meme which became one of my son's most searched word on Google. We spent hours searching for funny Star Wars meme like the one below. Haha! 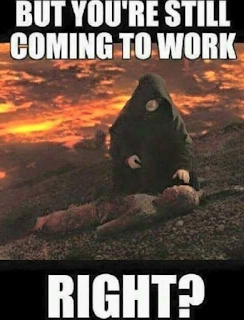 
The word meme came from another Greek word mimema which means imitate. Dawkins used the word to describe how ideas, music, stories can be copied like genes in the human society. This later became popularized into jokes like the one above that is copied and spread rapidly by internet users. The origins of meme is like genes, which according to the book, exist to propagate, by hook or by crook.

For years I have tend to look at the world with dualism lens i.e. good vs evil or black vs white. While I also acknowledge everthing is not binary and no one is pure good or evil. This is a very important concept in investing. A stock is never good or bad, it is about whether it is cheap enough. This book however really opened up my thinking. It argued that there isn't really good and evil. We are all just programs, like computer programs. Our code is written in our genes. Genes want to propagate and deploy strategies to do so. Some are "evil" while others are good or altruistic. The evil strategies tend to do better but when evil overwhelms the system, good comes back.

One of the most interesting examples came from an analogy with hawks and doves to represent aggressive or docile behaviour in a population. I like to think of them as people who would do anything to get what they want (hawk) and people who would to do the right things (dove). We can put different dualism here and but the lesson drawn is important. First though, we must explain how this works. So the analogy goes as follows, if a hawk fights a dove, the hawk always wins, but the doves run away with minor injuries. If a hawk fights a hawk, one would get seriously injured or even die. Finally, when a dove fights a dove, no one gets hurt.

So in a population full of doves, a single hawk will win all the fights and hence his genes propagate until he keeps finding hawks which he has to fight. Either one of them would be seriously injured or die and thus doves would come back again. This is analogous to a single aggressive corporate climber out to get everyone, but if the whole firm are filled these people, eventually the firm collapses or it gets taken over and the real doers come back to save the day. Hence good firms that we see today likely have a good pool of doers (doves) vs aggressive people (hawks).

Here's where things get interesting. According to game theory, there would be a steady ratio of hawks and doves after many evolutions. This would be 7/12 hawks vs 5/12 doves. Now if you think about it, this tend to reflect our corporate world (or perhaps the real world as well) where aggressive people who do anything to get what they want would be somewhat more than people who are righteous. So most firms are like that and they accomplish little. But great firms would probably have more doves and they go on to achieve great things, create great products, change the world.

The other important lesson for me is also about learning to run away to fight another day. Aggressive players always fight to win until they kill off each other. So the way to beat them is to have better strategies which will be discussed. Again here, while there are good and altruistic strategies, in the world of genes, some strategies are usually quite evil and they would tend to also be more than 50% of the strategies. 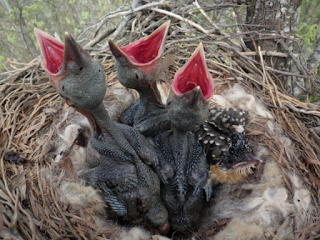 One of thediscussed strategy was the cuckoo bird strategy. Cuckoo birds do not build their own nests and tend to deposit their eggs in other bird's nests. They can do this because evolution had allowed them to lay eggs that are so similar to other birds' ones that the foster parents cannot tell the difference. Also when they hatch, cuckoo birds can scream louder and also has redder beaks (see pic above) such that foster parents would always feed them until they grow to become adults and go mate with other cuckoos to continue this cycle.

This despicable strategy works until it doesn't when the world run out of foster parents for young cuckoos. It is also hard to beat this strategy because to the foster parents the damage done is not big enough for them to counterattack. Foster parents might lose 1 or 2 eggs because the cuckoo mummy tend to kick out one egg to make space for her own parasite egg. The chicks also lose some food to the cuckoo chicks but that's the maximum damage. Meanwhile, before the cuckoo evolve to build their own nests, this is their only strategy to breed, so that's why they go all out to win.

Even so, nature always find a way as recent studies have shown that some birds began laying eggs that have tell-tale signature that makes them different from the cuckoo eggs. When the mothers figured out which are the cuckoo eggs, she throws them out of the nest. Other birds like the fairy-wren had taught their chicks pre-natally to chirp differently to tell their mothers they are the real deal. This is the evolutionary arms race!

As to the implications to investing, I guess it might pay to know the culture of some companies we are interested to invest in. Do they have a lot more hawks determined to kill everyone? Are their strategies sustainable? These are not easy questions and the answers won't be in annual reports. That's what make investing interesting. It's forever asking questions and trying to understand better!