Last night, Germany, the champion in the last world cup was eliminated by South Korea, the worst player in its group. It is now advised that Mongoloids should not visit Germany in the next one month lest we get beaten up by soccer hooligans in Europe's strongest economy. If you really have to go, wear a T-shirt proclaiming you are not Korean. Maybe this is all planned. Both Italy and Spain were also eliminated in group stages after they won the World Cup previously (see below). So, Germany is just keeping the tradition! 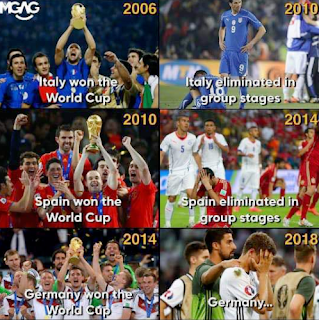 I believe the lesson here is that we do perform our best when there is nothing to lose. This is especially true in the World Cup. South Korea was confirmed out of the race. It really didn't matter whether they win or lose as they would not be able to advance to the next round. So, with no stress and completely relaxed, next thing we know, they beat the crap out of the previous champion.

We all remember Roberto Baggio's spectacular penalty miss in the 1994 World Cup Final which caused the country to fall into a recession that lasted till today. Just kidding. But it was bad. He was the star and the captain of the team and the ball went way off course. Brazil won the World Cup. We also remember how England exited Europe twice in a week. Then there was Messi earlier this month, missing his penalty in his first game. It takes a lot to perform under pressure and humans are very poor at it. So, when making important decisions, especially investment decisions, please relax. Think of blue skies and beaches. 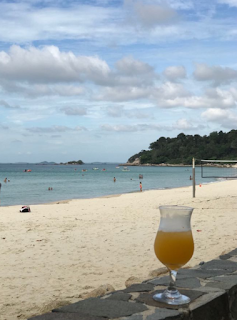 World Cup also brings in another related topic with regard to investing - betting. Remember Andy whose father bet Germany would win the last World Cup with all his savings? He was lucky four years ago, hopefully he didn't make the same bet this time. Actually, he shouldn't. The winnings should last until Andy goes to university. But how should we bet then? Most people probably bet on their favourite teams, Brazil, Argentina, Spain. Some more sophisticated ones try to use data to analyze and then figure out the odds and bet. Like analyzing all the past matches of Germany and South Korea, maybe bet big that Germany would win, then hedge with a smaller bet that Korea might win. Lo and behold, the hedge saved the day.

Speaking of figuring odds, there's this Singaporean guy who became a legend in soccer betting. His name is Dan Tan. Most of us probably never heard of him. I read about him in the New York Times a few years ago. His story was simply amazing. He tried to improve his odds (or rather his edge) by fixing matches. He would pay a few hundred thousand dollars to the referee, linesmen, goalkeeper to do things. Then he bet millions for the outcome he wants. When his story was leaked, that was when the whole world knew that maybe 70% of all soccer matches had some kind of fixes, including World Cup matches and this Singaporean guy fixed the bulk of them! There was once he paid the stadium to shut down the power so that the match would not have more than three goals! This guy is truly legendary.

Of course, he is now in jail. He became the most wanted man in Italy after fixing some matches and the Interpol and the Singapore police worked together to lock him up. Well, technically speaking, they didn't have enough evidence to trial him, so they just locked him up indefinitely. But I guess match fixing will continue until the day A.I. becomes the referee and linesmen and all soccer players are paid so much that it's impossible to pay them to fix matches. This could be partly why EPL is the most watched soccer league, their players are paid too much, nobody can fix the matches and hence it's real and fun to watch.

Ok back to investing, so what's the relevance?

Well. in the world of investing, the idea to improve investors' edge (legally that is) is being implemented by activists. Activist shareholders and funds are pushing companies to do things that would be good for share prices by writing open letters or joining the board of directors of companies to shake things up. Some of them have been super successful. Elliott Management's Paul Singer comes to mind. His fund's performance significantly beat both his peers and the market since 2007 as most of his activism caused share price to rally hard. Although one might argue that some did not sustain because once they made their money, these guys leave and sometimes, there is another mess to clean up. Check out Arconic! 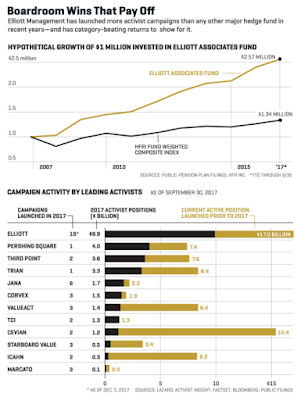 As small shareholders, we really don't have the ability nor clout to do such things. There is no way we can influence the share price to move up unless we personally know the CEO and can tell him how to run his business. This is why it is always advisable to go for blue chips, or to be more specific, large cap companies (better to be in the billions, the higher the better) and firms with strong business moats. This would be your branded products businesses and market leaders. I also tend to like firms with no debt. That way, it's harder for them to go bankrupt. The balance sheet is sometimes the last line of defence, like the goalkeeper. We definitely don't want that line to be breached!